Amazon has consistently stolen customers from Wal-Mart over the past several years, but Wal-Mart is fighting back and likely has an edge in this area.

Amazon.com's (AMZN -8.43%) AmazonFresh is now available in Seattle, Los Angeles, and San Francisco. Seeing that Amazon now offers a food-delivery service might excite you as an investor.

While Amazon is one of the most innovative and fastest-growing companies in the world, its AmazonFresh service is still in its early stages and far from a success. Amazon doesn't report results for its AmazonFresh service, but considering food is a low-margin business and deliveries add costs, it's not likely that the service is profitable...at least not yet. And if you're interested in the service, then it's going to set you back $299 per year.

Additionally, the minimum order is $35. In today's economic environment, most consumers have no interest committing $299 per year to a food-delivery service. In most instances, Amazon is more impressive than Wal-Mart Stores (WMT -1.33%), but this isn't one of those instances. 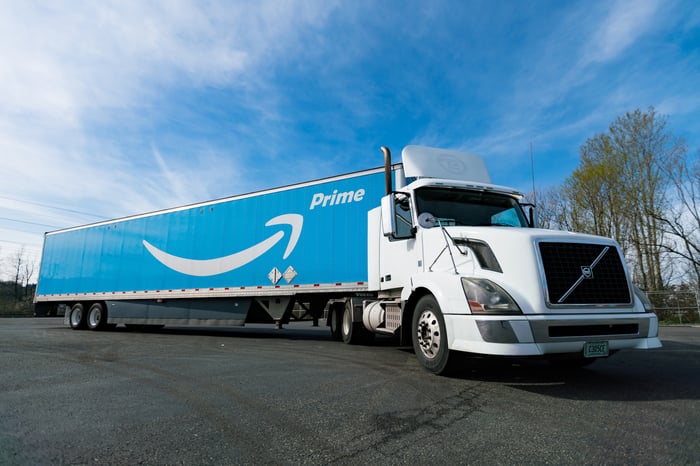 Wal-Mart's edge
Wal-Mart's "Walmart To Go" delivery service doesn't require an annual fee. This fact alone gives Wal-Mart more potential when it comes to food delivery. Today's consumers don't like commitments and would prefer to pay as they go. Wal-Mart's delivery service costs $5 to $7 per order. And the minimum order is $30, as opposed to Amazon's $35. However, there's another reason why Wal-Mart has more potential than Amazon in this area.

Wal-Mart recently announced in-store pickup for groceries. At the moment, only 11 Denver-area stores offer this service, but if you look at the Walmart.com/ToGo website and open the "About Walmart To Go" link, you will see that Walmart states it's "working hard to get more pickup locations as quickly as possible."

Roger Davidson -- a former grocery executive at Wal-Mart and SUPERVALU -- states that he would bet against AmazonFresh due to shrink. This pertains to fresh produce going out of date while in storage and being damaged during delivery. Davidson also states that the "click and connect" model should be successful. This is the same thing as in-store grocery pickup. At the moment, Kroger's (KR -1.22%) Harris Teeter offers this service (Harris Teeter expresslane Online Shopping), where customers can order food online and then pick up that food at a select time, which keeps all the food fresh. But it costs $4.95.

Wal-Mart's in-store grocery pickup is free. You might think this would hurt margins, which is understandable, but there's a reason for Wal-Mart's madness. According to its own study, approximately 55% of its surveyed customers would prefer to pick up groceries than have them delivered, primarily because it would allow them to pick up items they forgot. From Wal-Mart's perspective, this means that it's likely for many customers to enter the store. This, in turn, leads to sales of more items, sometimes higher-margin items.

Wal-Mart's foresight
Wal-Mart has generated $23 billion in operating cash flow over the past year. With this kind of capital available to go along with 4,100 U.S. store locations, Wal-Mart will have an edge in the food-delivery and pick-up category. It can also afford a temporary hit to margins during its build-out stage more than Amazon, given that Wal-Mart sports a profit margin of 3.6% versus Amazon's 0.2%.

Wal-Mart is wise to have gone this route. A company cannot survive without innovation, let alone thrive. Wal-Mart has seen a future trend and set itself up for success. If Wal-Mart were to succeed with its food delivery and/or in-store grocery pickup, it would lead to enormous advantages over Kroger, Safeway, Whole Foods Market, and Target.

Amazon is a little different. Though it will have a difficult time delivering profits with AmazonFresh, CEO Jeff Bezos has a knack for figuring out solutions to problems, and he has a ferocious desire to win. Therefore, he will continue fighting until he figures out a solution. That being the case, while Wal-Mart certainly has an edge in regards to catering to today's consumer in regards to food shopping, thanks to in-store grocery pickup, the impact on Amazon isn't likely to be as great on traditional grocery stores.

The Foolish takeaway
The crux of this story is about future food delivery and in-store grocery pickup potential, but if you look a little deeper, it's really about Wal-Mart's ability to stay ahead of industry trends thanks to massive cash flow generation and foresight. These are two big reasons why Wal-Mart should at least stay on every investor's watchlist. Please do your own research prior to making any investment decisions.