The combination treatment will be evaluated in a phase 1b/2 study of patients with mid- to late-stage melanoma. If the trial is successful, Amgen and Merck's combination therapy could go toe-to-toe against the dominant treatments in skin cancer, such as Roche's Zelboraf and Bristol-Myers Squibb's Yervoy.

Talimogene laherparepvec has shown promise in a phase 3 trial at Amgen as a monotherapy, and MK-3475 is being tested in phase 3 trials comparing the drug to Yervoy. The collaborative trial will be conducted in two parts, and will start in the fall of 2014:

Peak sales estimates for Amgen and Merck's drugs fall in the same range as forecasts for Zelboraf and Yervoy -- between $500 million and $1.5 billion on a melanoma approval alone. However, sales of MK-3475 could eventually spike to $3 billion by 2020 if it is approved for other indications.

The approval of both drugs could help Amgen diversify its portfolio away from Enbrel, which accounted for 25% of its product sales last quarter. For Merck, it represents a way to offset the plunging sales of Singulair, which went off-patent in 2012, and lackluster sales of its diabetes drugs Januvia and Janumet.

The collaboration could help Pfizer grow its cancer portfolio, which is mainly fueled by sales of Xalkori and Inlyta. Last quarter, sales of Xalkori climbed 98% year over year to $89 million while sales of Inlyta soared 117% to $102 million. Although both drugs only account for tiny slivers of Pfizer's top line, analysts believe that Xalkori and Inlyta could eventually hit peak sales of $1.3 billion and $600 million, respectively.

Myriad Genetics to acquire Crescendo Bioscience
Last but not least, Myriad Genetics could do very well this morning after it agreed to purchase Crescendo Bioscience for $270 million in cash. Myriad's second quarter earnings report, which revealed a 43.7% year-over-year jump in its net profit, boosted shares even further. Revenue climbed 37% to $204.1 million. Both Myriad's top and bottom line growth surpassed analyst estimates.

Myriad is best known for its BRCA1 and BRCA2 diagnostic tests, which identify genes which are known to cause breast and ovarian cancer. Several of Myriad's key patents were invalidated last year by the Supreme Court, which has brought competitors such as Quest Diagnostics into the market, but so far Myriad still controls the lion's share of the market. 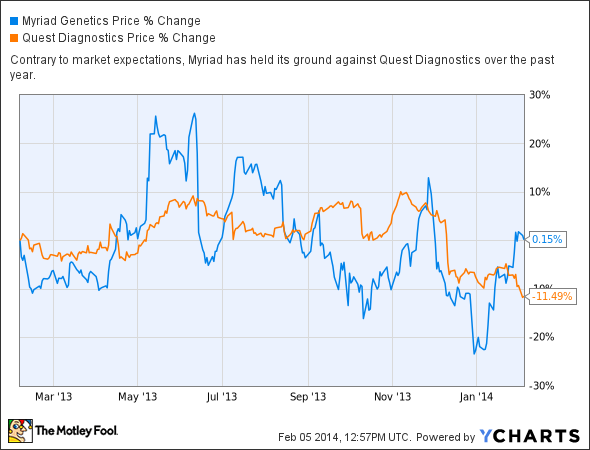 Acquiring Crescendo, which makes diagnostic tests for inflammatory and autoimmune diseases, will diversify Myriad's portfolio beyond breast cancer. Crescendo's main product, the Vectra DA, is a blood test for patients with rheumatoid arthritis, and generates roughly $10 million in sales per quarter.

The acquisition will dilute Myriad's earnings until 2016, after which it will become earnings accretive. Revenue, through organic and inorganic growth, will remain healthy -- the company now forecasts full-year sales between $740 million and $750 million, compared to its prior forecast of $700 million to $715 million.