Please ensure Javascript is enabled for purposes of website accessibility
Log In Help Join The Motley Fool
Free Article Join Over 1 Million Premium Members And Get More In-Depth Stock Guidance and Research
By Todd Campbell - Feb 6, 2014 at 9:30AM

The early read on how painful Cymbalta's patent expiration will be on Eli Lilly (LLY 0.53%) this year isn't promising. After losing exclusivity in December, fourth quarter sales of Cymbalta tumbled 38% to $883 million as distributors worked down inventory.

That dashes hope Cymbalta will somehow dodge the 70% to 90% sales drop that often comes after generics hit the market. If that estimate proves true, Cymbalta sales will fall from $5 billion in 2013 to less than $1.5 billion over the coming year.

That means Lilly will be relying even more heavily on its diabetes drugs. However, those drugs compete in an increasingly crowded market with Novo Nordisk (NVO 2.78%) and AstraZeneca (AZN 0.62%). 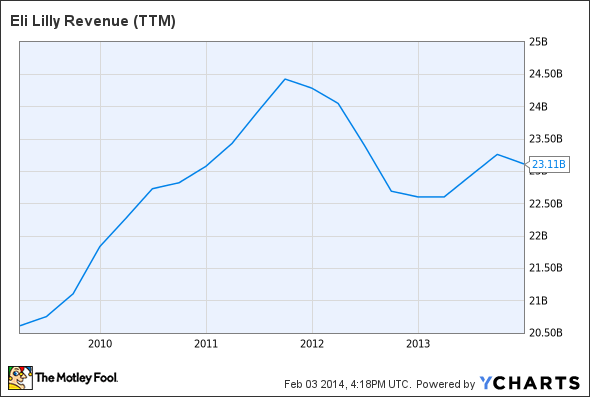 Surviving the patent cliff
If overcoming Cymbalta's headwind isn't enough of a challenge, Lilly also loses exclusivity for Evista in March. That drug had sales of $276 million in the fourth quarter, suggesting another $1 billion in sales are at risk.

While other big pharmas like Novartis already have fast growing drugs like Gilenya and Afinitor offsetting revenue losses from patent expirations, Lilly's stable is more mature. Its fastest growing drug last year was Strattera. Strattera's sales were up 14% to a hair over $700 million in 2013, but most of that growth came from price hikes rather than increased patient scripts.

That's not to say that Lilly's outlook is dire, but it certainly suggests investors need to consider this a transition year for the company. Lilly is guiding total sales to clock in at $19.2-$19.8 billion in 2014, down from more than $23 billion last year.

Passing the baton
If Lilly really wants to turn the corner back to growth in 2015, it's going to need some new products.  Luckily, the company has a couple intriguing compounds awaiting an FDA decision.

One of them is dulaglutide, a GLP-1 analog diabetes drug hoping to compete against Novo's blockbuster drug Victoza and AstraZeneca's Byetta and Bydureon. Lilly thinks dulaglutide could be a big seller given it outperformed Byetta in phase 3 trials and is dosed weekly like Byetta's cousin Bydureon. Analysts estimate dulaglutide could eventually generate peak annual sales of around $1.7 billion and while that's not enough to make investors forget Cymbalta, it's a solid start.

Another is Lilly's SGLT-2 inhibitor empagliflozin, a diabetes treatment co-developed by Boehringer Ingelheim. When dosed alongside insulin, the drug significantly lowered blood glucose levels compared to insulin alone. If approved, empagliflozin will battle for elbow room against Johnson & Johnson's Invokana and AstraZeneca's Forxiga.

Fool-worthy final thoughts
The company returned $3.8 billion to investors through dividends and buybacks last year, and strong cash flow should allow them to remain shareholder friendly.  Cost cuts and new products could set the stage for a post-expiration recovery similar to what played out at Forest Labs after it lost exclusivity for its top selling depression drug Lexapro.  If so, Lilly shareholders may see sales and share prices head higher heading into 2015.

Todd Campbell has no position in any stocks mentioned. Todd owns E.B. Capital Markets, LLC. E.B. Capital's clients may or may not have positions in the companies mentioned.  Todd also owns Gundalow Advisor's, LLC. Gundalow's clients do not have positions in the companies mentioned. The Motley Fool recommends Johnson & Johnson. The Motley Fool owns shares of Johnson & Johnson. Try any of our Foolish newsletter services free for 30 days. We Fools may not all hold the same opinions, but we all believe that considering a diverse range of insights makes us better investors. The Motley Fool has a disclosure policy.