Box office success has driven another phenomenal quarter for Disney and the stock is leading the Dow Jones Industrial Average higher today.

The Dow Jones Industrial Average (^DJI -0.57%) doesn't have a lot of highflying stocks, but The Walt Disney Company (DIS -0.79%) has become one that continues to beat the market year after year. Today, we learned that the company once again outperformed expectations on the back of incredible success at the box office.

But Disney isn't the only stock that's up today. The Dow Jones Industrial Average as a whole is up 1.1% late in trading after jobless claims fell by 20,000 last week to 331,000. This was ahead of estimates from economists, and it comes a day before the all-important jobs report from the Department of Labor tomorrow. U.S. employment has been improving slowly but surely, and after a tough holiday season in retail and recent troubles in emerging markets, investors will be looking to see whether the employment market is holding up, because consumers still account for about 70% of the economy in the U.S.

Disney shows its box office dominance
You may not think that a company the size of Disney could grow continuously, but it did so again in its fiscal first quarter, posting 8.5% revenue growth and 32% growth in earnings. Thor: The Dark World was a box office success, and Frozen outperformed even the wildest dreams of Disney executives with $865 million of box office so far.

Even ESPN had a 10% increase in advertising revenue, showing there's no slowing the dominant sports network.

What's important about all of this content is that it drives the profit machine for Disney long-term. Box office success leads to DVD and toy sales, draws viewers to television networks, and provides more pricing power for Disney's theme parks. This focus on driving content is why Disney's stock has outperformed the Dow over the last five years. 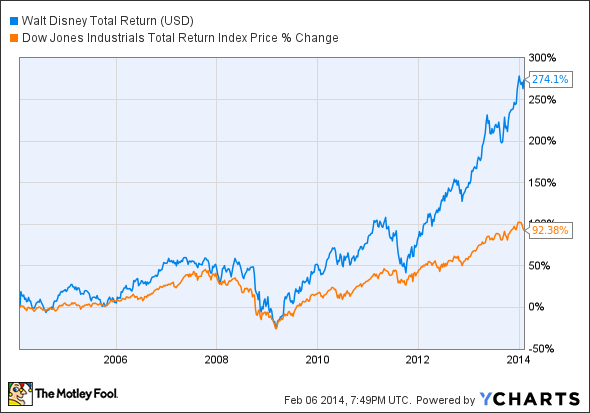 Box office success may have driven a great quarter for Disney, but it's only one slice of the company's value-creating pie. Media networks and theme parks will be using the characters from Thor and Frozen for years to come. The formula for Disney to outperform the market is well-defined, and it's working wonders for the company's long-term investors.