Longer-term trends continue to point to improvement over the end of 2013.

Initial U.S. jobless claims fell 5.7% to 331,000 for the week ending Feb. 1, according to a Labor Department report released today.

After claims rose a revised 6.7% the previous week, this latest report came as a pleasant surprise to analysts, who had expected a smaller drop to 337,000 claims. 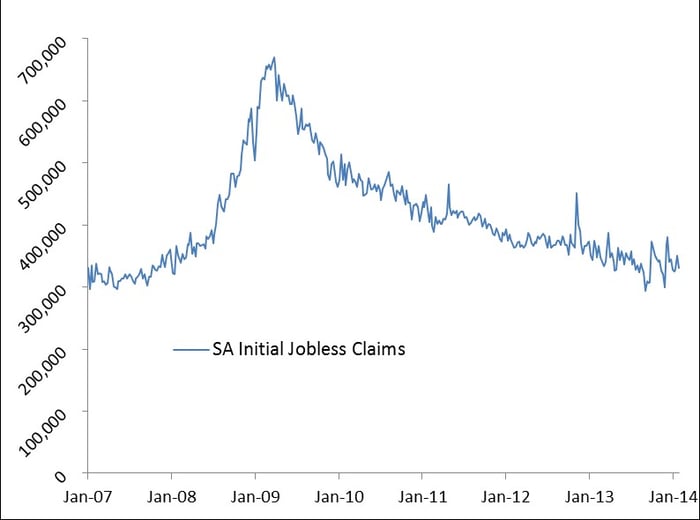 From a more long-term perspective, a slight 0.1% bump in the four-week moving average to 334,000 initial claims keeps numbers relatively steady and consistently dropping from December's average 345,000 claims. Both the latest week's claims and the four-week average fall significantly below 400,000, a cutoff point that economists consider a sign of an improving labor market.

On a state-by-state basis, 20 states recorded a decrease of more than 1,000 initial claims for the week ending Jan. 25 (most recent available data). New York's numbers dropped the most (down 7,080), due primarily to fewer construction and food services layoffs.

For the same period, Indiana and Massachusetts were the only states to register increases of more than 1,000 initial claims. Neither state provided any comment to the Labor Department for their respective 5,410 and 1,050 initial claims increases.