PNC has been open and honest about its desire to shift how it generates its revenue, and 2013 proved that big changes may continue to be ahead for this bank.

All told, PNC couldn't have asked for a better year last year. Its stock was on one of the more impressive runs, rising 35% on the year, but its core business delivered impressive gains too, as net income jumped 30% from $3 billion in 2012 to $4.2 billion in 2013. Yet after diving into its earnings a little further, there was one trend at the bank every investor needs to keep an eye on.

Changing the way it makes money
The revenue streams of banks consist largely of two things, net interest income -- the difference between what it earns from loans versus what it pays out on deposits and other sources of funding -- as well as fees and other associate things known as non-interest income.

Generally speaking most banks have a pretty stable stream of how revenue is divided between these two categories, and there is little variation on a year to year basis. Consider in 2012 Wells Fargo (WFC 0.80%) had an even 50/50 split between net interest income and non-interest income, and in 2013 it changed to 51/49. A simple 1% shift was also true of US Bancorp (USB 1.79%) and Bank of America (BAC 2.30%) where each bank saw little change in where its income actually comes from:

However, at PNC, things went in a dramatically different direction: 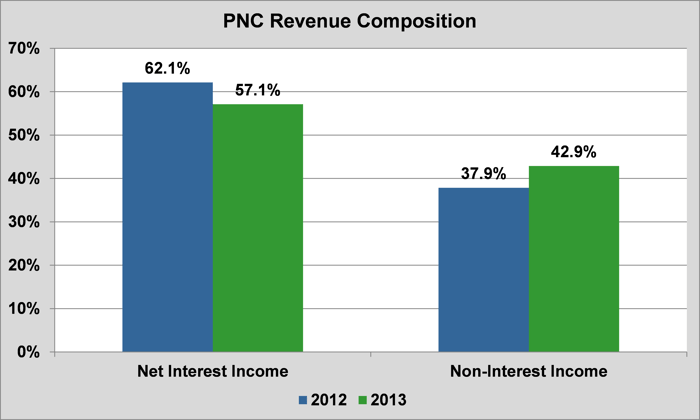 Why this matters
In September, when Bill Demchak, the CEO of PNC, gave a presentation at a Barclays conference he said the company has five strategic priorities: a desire to drive growth in new markets, an expansion of its wealth management business, a redefinition of retail banking, a strong mortgage banking business, and disciplined expense management.

While the priorities were numerous, the reason behind them were simple, as he noted, "these priorities are aligned to help us create a Company that is predisposed to increasing fee income, making us less susceptible to downturns susceptible and less dependent on chasing higher risk assets are betting on how fast interest rates may or may not rise." (emphasis added)

He said for years PNC has been "planting seeds," to draw in new customers and as a result, it had "the opportunity to move these new clients toward the depth of product penetration we enjoy with our longer-term clients," which ultimately represented "significant potential to generate new fee income."

It is always encouraging to watch any company execute on its strategic priorities, and this shift in income at PNC to become more fee-oriented is a prime example of that. It will be important to monitor if this change in business dynamics impacts consumer preferences toward the bank, but that does not appear to be the case initially.

Ultimately, if this shift to a more fee-oriented business model results in PNC becoming both a safer and more profitable bank, it will undoubtedly be to the delight of investors.