3D Systems issues earnings warnings and takes the other 3-D printing companies down with it.

If you're following the 3-D printing space, you likely know that the sector was pummeled on Wednesday. The catalyst for the group's drop was industry juggernaut 3D Systems (DDD 0.49%) announcing preliminary 2013 earnings results and issuing 2014 earnings guidance, both of which fell significantly short of its prior guidance and analysts' estimates.

As is typical within a sector or industry -- especially a "hot" one, where valuations are sky-high -- shares of the other major 3-D printing companies fell in sympathy.

Thursday's trading saw the two leading companies gaining back about 1%, ExOne recouping nearly 4%, Arcam dipping slightly in the red, and voxeljet giving up close to 2%.

3D Systems' warning
3D Systems earnings' warning seemed just a matter of time, given that the No. 2 player by annual revenue, Stratasys, announced a similar warning last month. ExOne also released a warning in January, though on the revenue side, and for different reasons than its two bigger peers.

Using the midpoint figures, 3D Systems is expecting EPS will decrease nearly 12% in 2014, while revenue will grow about 36%.

The company cited increases in research and development, marketing, and acquisition-related expenses in the fourth quarter as the primary reasons for the lower than expected earnings in 2013. The lowered guidance for 2014 is due to 3D Systems' game plan, taken from a page from Amazon.com, remaining the same as it was in the fourth quarter: sacrifice short-term profits for spending on activities intended to fuel long-term growth and capture market share. The million-dollar question, of course, is will the game plan work or will it result in a race to the bottom on margins across the sector?

Stratasys' and ExOne's warnings
In January, Stratasys lowered its 2014 guidance for adjusted earnings per share to the range of $2.15-$2.25, below analysts' estimates of $2.31. It also provided revenue guidance of $660 million-$680 million, which was above the consensus estimate of $658.5 million.

Stratasys, likewise, cited a planned ramp-up in its marketing and research and development activities as the reasons.

My take on Stratasys' and 3D Systems' similar actions is a bit different. Stratasys had and has no choice but to ratchet up its game if it wants to stay competitive with 3D Systems, as 3D Systems has been announcing diverse partnerships and key acquisitions left and right. These include partnering with Google on Project Ara, which has the potential to be watershed moment for 3-D printing if it's successful, and acquiring Phenix Systems, which gave it the capability to print metals.

3D Systems, on the other hand, is currently the sector's top dog. So, its 2014 R&D and marketing ramp-up is designed to increase its lead, not to play catch-up. That said, it also has little choice, at least on the R&D end, as it has key patents that start expiring this year.

As for ExOne, it lowered its 2013 revenue expectation to a range of $40 million-$42 million, below its prior guidance of $48 million. The company cited delayed approvals for foreign sales of four systems as the reason. This is just a case of revenue shifting, as ExOne expects to book these orders in the first half of this year. ExOne is a relatively small company that sells pricey 3-D printers, so quarterly revenue will likely be "lumpy" for a while.

3D Systems seems to deserve to sport somewhat of a premium valuation relative to its main competitor and peer, Stratasys, given it's profitable on a GAAP basis, has metals printing capabilities (which Stratasys does not, though will surely attain in 2014, in my opinion), and has inked a deal with deep-pocketed Google. That said, the valuation differential grew a bit too much -- at least the market sees it that way -- over the course of 2013. When we entered 2014, 3D Systems' market cap, price-to-sales, and forward P/E were respectively about 40%, 30%, and 30% higher than Stratasys'.

Perspective
With the exception of Arcam, 2014 hasn't been kind to 2013's red-hot sector. The one-year-performance chart should put things in perspective. 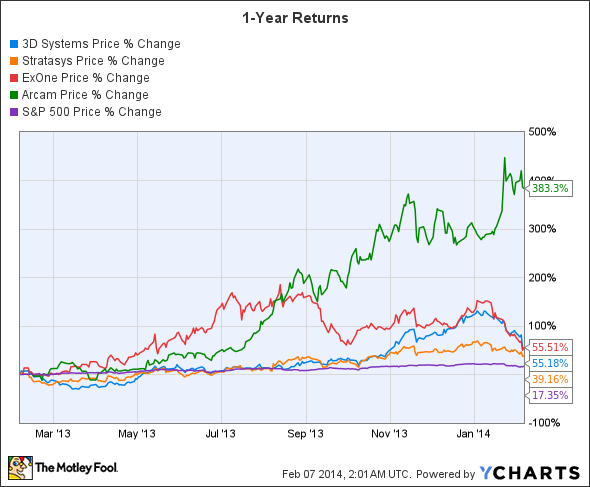 If you're an investor in one or more of the 3-D printing stocks, the best move is likely staying the course unless there's been a material change to your investing thesis.