Let’s discuss 3 key takeaways from Teva’s fourth quarter earnings, and if rising competition in MS treatments from Novartis, Biogen, and Sanofi will eventually doom the company.

Teva Pharmaceutical (TEVA 1.44%), the largest generics maker in the world by revenue, has clearly seen better days. Desperate attempts to reverse a July 2012 U.S. court ruling invalidating several key patents for its blockbuster injectable multiple sclerosis drug Copaxone failed, leaving the door open for generic competition by May 2014. CEO Jeremy Levin abruptly resigned last October after clashing with the board, so the company was without a leader for more than three months.

Last November, leaked oudated projections of Copaxone losses spooked investors and caused the stock to plunge to a 52-week low. To top off all that misery, Teva's oral MS treatment laquinimod -- considered its best chance at competing against similar treatments from Novartis, Biogen (BIIB -1.29%), and Sanofi -- was given a thumbs-down by European regulators last month. 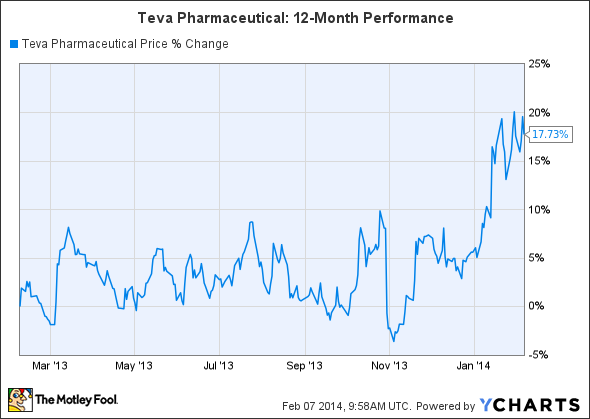 The good news is that Teva stock climbed nearly 18% over the past 12 months despite those problems. Investors seem to have come to terms with the eventual loss of Copaxone, and the appointment of a new CEO, Erez Vigodman, has inspired some renewed confidence in the company's leadership. Teva reported its fourth quarter earnings on February 6, and the company surprisingly topped Wall Street estimates on both its top and bottom lines. Revenue climbed 3% year over year to $5.4 billion, and non-GAAP earnings rose 8% to $1.42 per share.

Does that growth mean investors should get bullish on Teva's prospects again? Let's take a closer look at three key takeaways from the fourth quarter to decide.

1. Copaxone is still headed off a cliff
Sales of Copaxone rose 8% to $1.14 billion, accounting for 21% of Teva's total revenue. Sales within the U.S. declined 2% to $805 million, due to increased competition from oral MS drugs from Novartis, Biogen, and Sanofi. Overseas sales surged 42% to $337 million, thanks to robust sales growth in Russia and Germany.

Teva has previously stated that every additional month that generic Copaxone is delayed could contribute $78 million in sales and $0.08 to its earnings per share. If generic Copaxone arrives in May, Teva forecasts non-GAAP earnings of $4.20 to $4.50 per share on revenue of $19.3 billion to $20.3 billion in fiscal 2014.

That would represent a 10% to 16% year-over-year drop in earnings and a flat to 5% decline in revenue from fiscal 2013. Analysts polled by Bloomberg had projected earnings of $4.92 per share on revenue of $19.9 billion.

It's painfully clear that generic competitors such as Mylan (MYL), Momenta, and Novartis' Sandoz unit will roll out generic Copaxone on time. That's bad news for Teva, but great news for MS patients, since branded Copaxone has a wholesale price of $40,000 per year.

2. Oral MS drugs could exacerbate Copaxone's decline
Meanwhile, the three main oral MS drugs -- Novartis' Gilenya, Biogen's Tecfidera, and Sanofi's Aubagio -- could all bury Copaxone in its key U.S. market. Simply take a look at how fast these treatments have been selling, despite their limited time on the market:

Tecfidera, which was approved by the FDA in March 2013 and by European regulators last month, appears to be the largest threat by peak sales estimate. Wall Street has the highest expectations for Tecfidera, since it is considered to have the best safety profile of the three treatments.

However, all three treatments are considerably more expensive than Copaxone. Gilenya is the most expensive, with a wholesale price of $60,000 per year, followed by Tecfidera at $55,000 and Aubagio at $45,000. Aubagio is the cheapest, but market expectations are also the lowest, due to its least attractive side effect profile.

Despite their higher price tags, oral MS drugs have already affected U.S. sales of Copaxone, as seen in Teva's fourth quarter report. Now that all three drugs have also been approved in the EU, Teva's global sales could start slipping as well.

3. Unimpressive growth in generics
Sales of Teva's generics, which accounted for half of its revenue in the fourth quarter, only inched up 1% year over year to $2.7 billion. Sales in the U.S. rose 14% to $1.2 billion, but those gains were offset by a 2% decline in Europe to $940 million and a 14% drop in the rest of the world to $579 million.

Teva's U.S. market remained strong, thanks to launches of generic versions of Niaspan, Temodar, Cymbalta, Tobi, and Pulmicort. However, the decline in Europe was attributed to a weak French market and a renewed focus on sustainable businesses in Spain and Germany. Meanwhile, sales in Russia fell due to a weak winter season, and sales in Japan were harmed by the weak yen.

Teva's unimpressive growth in generics is standard for the market. Last quarter, Novartis' Sandoz unit also reported anemic 1% year-over-year sales growth to $2.4 billion. Sandoz's situation, however, was nearly the opposite of Teva's -- Sandoz's robust sales in the emerging markets and Western Europe overall were offset by weaker sales in the U.S. and Germany.

What's next for Teva?
Teva's biggest problems -- its Copaxone conundrum and its flat growth in generics -- won't go away anytime soon. It could, however, resort to inorganic growth to get out of its current rut.

In a previous article, I mentioned that merging with Mylan could be a smart move for both companies. Merging with Mylan would immediately reduce the weight of Copaxone on its top line. Mylan's slumping sales in the U.S. (which caused a 1.9% year-over-year drop in revenue last quarter) could also be offset by Teva's double-digit growth in the U.S. generics market. Moreover, combining the two companies would solidify its lead over Novartis, Abbott Labs, Actavis, and Sanofi.

In conclusion, there are only two reasons I see for owning Teva -- its decent quarterly dividend of $0.34 per share, and the possibility of future mergers and acquisitions to offset its aforementioned problems.

Why Teva Stock Trounced the Market on Friday
363%