Comparing MetLife to competitors like AIG suggests a 30% upside. The stock also pays a decent 2.3% dividend yield to shareholders.

Since the beginning of 2014, MetLife (MET 0.34%) has experienced a significant downturn, down more than 9%. MetLife's plunge is more than that of peers such as American International Group (AIG -0.56%) and Prudential Financial (PRU -0.05%). During the same time period, Prudential dropped by 8.5%, while AIG declined by more than 6%.

Is this a good time to pick up MetLife after its drop? Let's take a closer look.

MetLife's five strategic priorities
MetLife focuses its operations in the Americas, which includes both North America and Latin America. The Americas segment generated more than $27 billion in premiums and $51 billion in total revenue in 2012. In the Americas segment, the Group, Voluntary, and Worksite Benefits business contributed the most premiums, with nearly $15 billion in 2012 premiums. In terms of total revenue, however, the Retail business in Americas is the biggest generator at $19.6 billion.

MetLife has five main strategies in its Americas segment: Driving growth in its GVWB business, expanding its business in Latin America, pursuing U.S. pension closeouts, repositioning the Retail business, and setting up the U.S. direct business. MetLife expects to double revenue in GVWB, while the Latin American business could experience a substantial rise in earnings (helped by the Provida acquisition in Chile). In the long run, MetLife estimates a mid single-digit earnings growth rate for the Americas segment, low single-digit growth in Retail, and low to mid-teen growth in Latin America. As a result, the long-term operating earnings are expected to grow at mid-single digits.

Improving operating performance with the lowest earnings valuation
Driven by the increases in equity market value, a lower loss expectation for their interest rate hedges, and the benefits from a "four-way merger," the U.S. subsidiary could pay higher dividends to the parent company. As a result, MetLife has forecast an improving ratio of free cash flow-to-operating earnings. While the company expects a FCF/operating earnings to be roughly 35% in 2014, it sees 2015 to 2016 delivering a range of 45% to 55%. With its ongoing expense cutting initiatives, MetLife expected to deliver gross cash savings of $1 billion and the net pre-tax savings of $600 million by 2015. 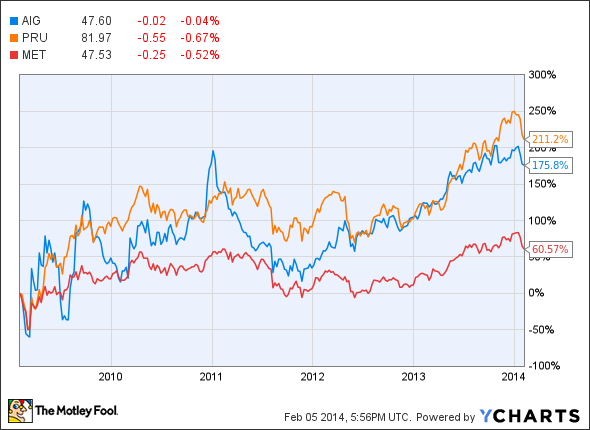 Compared to both AIG and Prudential, MetLife looks like the least expensive, trading at only 8.6 times its forward earnings, whereas AIG and Prudential trade at much higher multiples. At $48 per share, AIG is worth over $70.6 billion in total market capitalization, with a forward P/E of 11. Prudential also has a higher forward earnings multiple at 9.1. For income investors, Prudential might be the most attractive with its 2.5% dividend yield. MetLife ranks second with a 2.3% dividend yield, while AIG offers the lowest dividend yield among the three at only 0.8%.

My Foolish take
With a consistent focus on its strategic initiatives and ongoing cost savings, MetLife expects to improve its net earnings and free cash flow significantly. What makes me get excited about MetLife is its high expected return on equity in the next three years. Helped by its expense reduction initiatives, the company estimates that it will increase its return on equity to the 12% to 14% range by 2016. Consequently, MetLife's share price could rise much higher along with the improving operating performance.

Is This High-Yield Dividend Stock a Buy?

2 Best Dividend Stocks That Wall Street Is Sleeping On
376%