The unemployment rate dropped to 6.6%, but a weak jobs report is pushing the Dow Jones today up as investors believe the Fed will taper slower.

There was was one U.S. economic release today.

The unemployment rate has been steadily falling but the jobs reports have been weak. The Labor Department's previous report initially showed the economy added just 74,000 jobs in December. Many analysts were hoping that was a temporary blip, but the latest numbers show jobs growth is slowing. 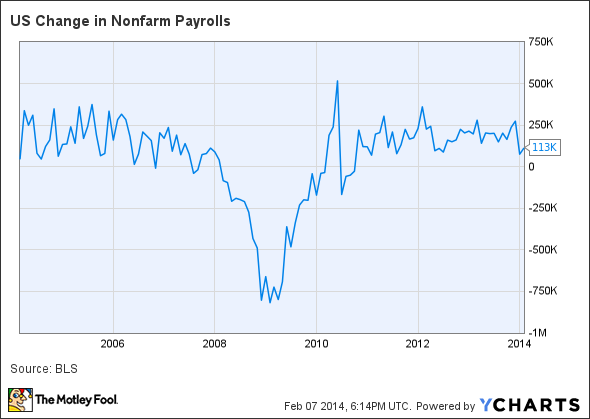 December's number was only revised up by 1,000 jobs to 75,000 jobs added that month. January's number was better at 113,000 but well below the 175,000 some analysts expected (other economists had projected 189,000 added jobs). Some have attributed the weak numbers to the rough winter the country is facing. With two polar vortexes sending freezing temperatures down as far as the Gulf of Mexico there may be some credence to this. In the northern U.S., for example, Minneapolis canceled school for the first time since 1996 as temperatures hit a low of -30, (-50 with the wind chill). Other parts of the nation have also been hit by snap colds and blanketed with snow.

Three inches of snow in Atlanta last week left many motorists stranded for long hours. Major retailers pitched in by allowing stuck commuters and others places to sleep on their floors. There aren't many job interviews going on in this kind of situation. 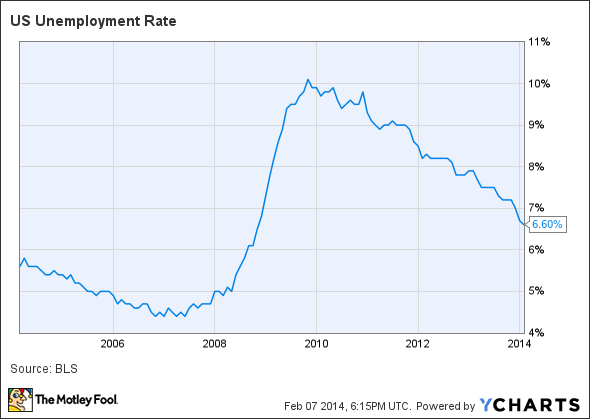 The market is up today as some investors believe the Fed will be less likely to continue to taper its long-term asset purchases if jobs growth continues to stay low. That's possible if the jobs market is actually getting weaker, but as it appears to just be a temporary lull from the poor weather I expect the Fed to continue to taper. With the central bank purchasing fewer long-term assets each month, I expect rates to stay above last year's level and profit growth to be challenged.

For me, the story remains the same. The economy continues to slowly grow, the jobs market is getting healthier, and the market is still overvalued.

What's an investor to do?
In any event, your investment strategy shouldn't be dependent on a few economic reports. Constantly educate yourself, find great companies, and invest for the long term.

3 Investments You'll Thank Yourself For by the End of 2023