At a time when many investors are high-tailing it out of positions in Coca-Cola (NYSE:KO), PepsiCo (NASDAQ:PEP), and any other stocks remotely associated with the declining U.S. soft-drink market, super-investor Don Yacktman is building large positions in the companies. Yacktman's investing acumen put his fund in the top 1% of its peers for 15-year trailing performance, as measured by Morningstar.

Last quarter, Yacktman's mutual fund increased its position in PepsiCo by 14% and in Coca-Cola by 8%; the additional investment combined for $441 million to bring the total market value of the fund's holdings of the two companies to $4.1 billion based on current prices. PepsiCo now represents the fund's biggest position -- a 10.8% stake -- and Coca-Cola its fourth-largest -- a 7.3% stake. Such confidence from one of the world's best investors over the last 15 years should make individual investors take a closer look at these two companies.

Why Yacktman likes Coca-Cola and PepsiCo
The first thing that Yacktman likes about the companies is that they are good businesses. Not long ago, he told Barron's:

[Coca-Cola and PepsiCo] have incredibly good business models. We are looking for businesses that have high returns on tangible assets, and they fit that profile.

Like Warren Buffett, Yacktman wants to buy and hold businesses that can reinvest cash at a high rate over many years. One indication of high returns on investment is the free cash flow generated as a percentage of tangible assets. Coca-Cola and PepsiCo both earn high cash returns on tangible assets. 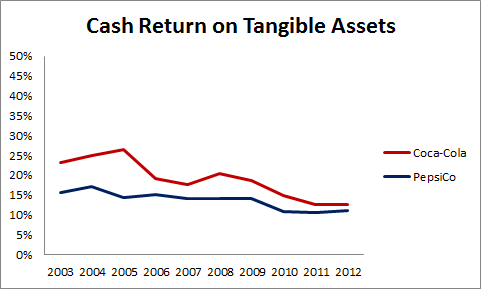 Coca-Cola and PepsiCo earn mid-teens-or-higher returns on tangible assets; for each dollar invested in operations, the companies get about $0.15 in annual free cash flow. Coca-Cola's return has dropped in recent years because it bought back its capital-intensive North American bottling operations; when it spins off the unit sometime in the next couple of years, its return on tangible assets should increase to above 20%. Most investors do not earn even 10% annual returns on their investments, so long-term investors in Coca-Cola and PepsiCo are best served when the companies reinvest as much cash as possible at a high rate of return rather than paying it out in a dividend.

The other half of Yacktman's investment reasoning is that both companies have higher risk-adjusted yields than are available anywhere else in the market. As he told Barron's:

We are, in effect, buying bonds, and if you can get something above your cost of capital and above your hurdle rate, then you ought to be buying.

Since Coca-Cola and PepsiCo earn high rates of return on assets, Yacktman is confident that the retained cash flow is worth more than if the companies paid it all out in a dividend. Thus, he believes the two stocks offer a higher rate of return than their free cash flow yields indicate.

At these prices, these companies are capable of putting up inflation plus more than 6%, maybe 7% returns per annum, on average, over the long term...If you figure inflation today is 2%, you are looking at returns slightly below 10% for these stocks.

Foolish takeaway
If you don't already follow Don Yacktman, you should. He applies a common sense approach to investing that enables him to outperform the vast majority of his mutual fund peers. He likes Coca-Cola and PepsiCo because they offer high-single digit annual returns with hardly any more risk than AAA bonds. These stocks won't make you rich overnight, but if held long enough, Coca-Cola and PepsiCo will compound your money at an enviable rate of return.