Recent earnings for McDonald's disappointed the market yet again. This occurred even though industry peers like Wendy's and Sonic beat expectations for their last few quarters. Before McDonald's can beat expectations, it first needs to address its biggest problem of all.

McDonald's (MCD -0.49%) fourth-quarter and full-year 2013 results marked the fifth-straight  quarter of disappointing sales. Operating results seem to have hit a plateau larger than the one in Tibet since Don Thompson took over as CEO in 2012 -- replacing the mastermind behind the early 2000's comeback, Jim Skinner. However, Don Thompson is not the biggest problem for McDonald's -- and, in fact, he is hardly to blame for all of the company's predicaments.

Recent outperformances by industry peers like Wendy's (WEN -0.73%) and Sonic (SONC) have only added pressure on McDonald's to keep up with the competition and execute quarterly. However, before McDonald's can beat expectations, it first needs to address its biggest problem of all -- being everything to everyone.

McDonald's fourth-quarter earnings and conference call
The key takeaway from McDonald's 2013 fourth-quarter earnings was the decline in domestic comp sales of 1.4%, while global comp sales fell 0.1%. For the year, McDonald's did see 2% increases in both revenue and net income of $28.1 and $5.6 billion, respectively. However, the conference call revealed that a 3.1% menu pricing increase for the year helped offset lost traffic.

In contrast, preliminary 2013 fourth-quarter earnings for Wendy's revealed that comp sales rose 3.1% for the quarter and 1.9% for the year. Likewise, Sonic reported strong first-quarter 2014 results at the beginning of this year with system-wide comp sales increasing 2.2%.

Is McDonald's taking on the world?
In 2012, McDonald's tried to increase profit margins when it revealed an Extra Value menu that wound up not doing so well with customers.

In 2013, a string of menu items were introduced to unrelated parts of the menu that included Fish McBites (January), Premium McWrap and Egg White Delight (April), Quarter Pounder changes (June), and the infamous Mighty Wings (September).

Recently, McDonald's revealed that it now wants to increase "coffee-driven visits" in a U.S. strategy that goes out to 2016.

Overall, these strategies appear to be taking McDonald's further and further away from core offerings like its Big Mac.

The fact that McDonald's said one of its top priorities was improving its coffee lineup, just a week after its earnings report, suggests that the company is still indecisive about its next move. 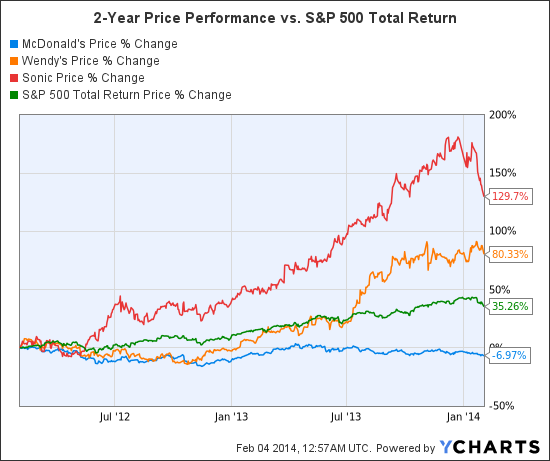 How many priorities can McDonald's realistically handle?
During the earnings conference call, McDonald's referenced numerous priorities: optimizing the menu, modernizing the customer experience, planned kitchen investments across all 14,000 U.S. locations, staffing improvements, and creating more of a coffee culture at McDonald's.

As with its admittedly overcomplicated menu that now has over 180 items, the company's priority list seems just as long.

A scientific control is often used to minimize the effects of variables other than the single independent variable being studied. This not only increases the reliability of the results from an experiment, it highlights exactly what works and what doesn't.

If improved coffee succeeded, but McDonald's also made its menu less complicated by removing breakfast items and thereby caused customer traffic to decline overall, was the improved coffee or the reduced breakfast menu a failure?

Where change may be helpful for McDonald's
Wendy's has been successful where McDonald's has not during the past year. Limited offerings like the pretzel burger helped Wendy's stock rebound and increased foot traffic. The company's short-term strategy that focuses on system optimization has led it to keep pace as it franchised 415  restaurants by the second quarter of 2014.

Sonic has also been enhancing its brand by introducing drive-in prototypes that meet the needs of different markets. For example, Sonic's new Buffalo, New York drive-ins will feature enclosed dining areas to meet weather requirements in the winter months.

It is estimated that McDonald's will invest $200 million in the upcoming winter Olympics, which includes TV spots and advertisements throughout the games. However, fast-casual king Chipotle has historically taken a much different marketing approach.

Chipotle relies mainly on billboards, radio, and word-of-mouth to advertise. It wasn't until the 54th Grammy Awards in 2012 when the company aired its first nationally televised commercial. Later in February this year, the company will break the mold again by starting an online show on Hulu called Farmed and Dangerous. The show is designed to entertain while also getting customers to think about what they eat.

McDonald's can capture several positives from Wendy's, Sonic, and even Chipotle. Both Wendy's and Sonic have focused on a few key strategies and they have been executing them well over the past several quarters. Chipotle has carefully thought out how it wants to market itself and the company continues to follow through by always being itself in the end.

Bottom line
Last month, NPD revealed that 70% of consumers won't try a new menu item. If this is the case, this study might foreshadow the path McDonald's is heading down if it continues to modify its overall menu on a regular basis with limited time offers or other specials while trying to be everything to everyone.

It's great that McDonald's recognized areas where it can improve. However, McDonald's also needs to focus on tackling a few big objectives, executing those, and then moving on to the next tasks. In football, an offense works best when every player is on the same page with a goal of accomplishing one specific task per play. Otherwise, the football never gets closer to the end zone and no progress is made.