Please ensure Javascript is enabled for purposes of website accessibility
Log In Help Join The Motley Fool
Free Article Join Over 1 Million Premium Members And Get More In-Depth Stock Guidance and Research
By Leo Sun - Feb 8, 2014 at 10:01AM

Microsoft just offered $100 credit toward the purchase of an Xbox One to U.S. gamers who “ditch” their PS3s. Does this desperate move indicate just how afraid Microsoft is that Sony’s PS4 will emerge triumphant?

Last week, Microsoft (MSFT -1.29%) offered U.S. gamers $100 credit toward the purchase of an Xbox One if they "ditched" (traded in) their Sony (SONY -1.08%) PS3s. This offer, which lasts until March 2, has raised the eyebrows of investors and gamers alike.

In a previous article using data compiled by GameSpot's GameTrax, I noted that only 10% of surveyed Xbox One buyers previously owned a PS3, compared to 28% of PS4 buyers who previously owned the Xbox 360. Those unbalanced conversion ratios indicated that Sony would gain an edge over Microsoft as the eighth generation console race progressed.

There's one question on everyone's mind: "Is Microsoft really that worried about competition from Sony's PS4?"

Meanwhile, the most recent sales figures from Vgchartz.com show that Microsoft has sold 3.37 million Xbox Ones, while Sony has sold 4.88 million PS4s. Both consoles, which were launched last November, are closing in on Nintendo's (NTDOY -0.12%) Wii U, which has sold 5.62 million units since November 2012.

There is now a trail of clues indicating that the gap between the Xbox One and the PS4 is widening:

The logic behind Microsoft's $100 trade-in offer
All of these clues indicate that sales of the Xbox One are slowing more than expected. What could offering a $100 trade-in rebate to PS3 owners accomplish? Let's crunch the numbers. 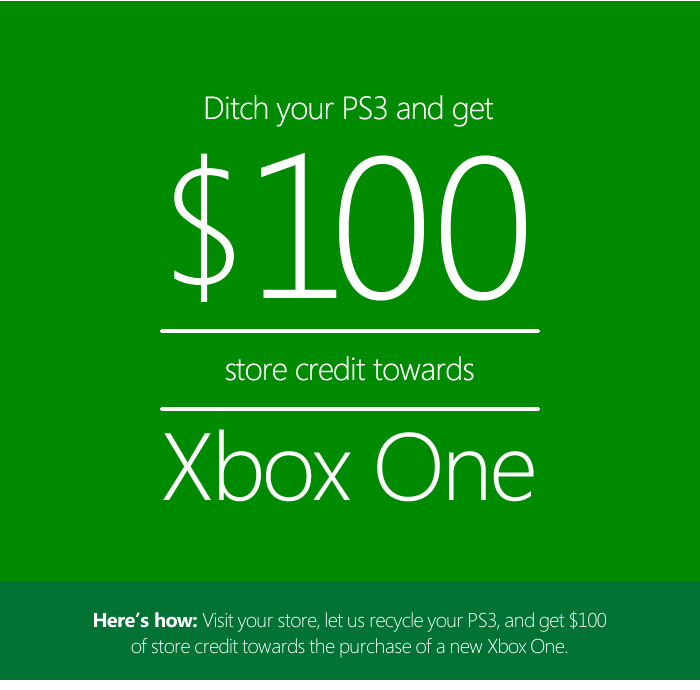 An Xbox One has an estimated manufacturing cost of $471 and sells for $499. A price cut to $399 would cause a loss of $72 per console, so that wouldn't be employed unless Xbox One sales completely stalled out.

Removing the Kinect ($75) and the headset ($10) could shave $85 off the production cost, which has led to speculation that the Kinect, at least, could be removed in a cheaper version later this year.

A pre-owned PS3 sells for $200 to $230 at GameStop (GME -7.89%). However, GameStop only pays $100 for a 500GB PS3 system. Therefore, all Microsoft is really doing is offering the same trade-in deal as GameStop, but using it as a publicity stunt to desperately boost its conversion rate of PS3 gamers.

Gamers who don't want an Xbox One can simply go to GameStop and trade in their used PS3 systems for $100 in store credit to reduce the price of a new PS4 to $299 instead.

While that's certainly an optimistic view of things, there are five huge problems with that theory:

Moreover, Titanfall doesn't look much different from Crysis, Halo, or most other modern shooters. The only thing that stands out about the game is its acrobatic freedom and seamless swap from ground-based combat to mech-based combat.

It's definitely pretty, but there's nothing so Earth-shattering about the title that makes it a "must buy" title for eighth generation consoles, especially without a dedicated single-player campaign.

I'm not sure why Microsoft believes that Titanfall could be the Xbox One's Halo, especially since Activision's (NASDAQ: ATVI) Destiny, from Halo developer Bungie, has a much better chance of claiming that title.

The bottom line
In conclusion, Microsoft's $100 PS3 rebate is just the latest in the company's new strategy of petty pokes against its rivals, and will do very little to boost Xbox One sales.

Encouraging gamers to "ditch" their PS3s isn't much different from its attack ads on Apple's (NASDAQ: AAPL) iPads using Siri's narration, or its "Scroogled" campaign against Google -- it's simply desperate, immature, and embarrassing.

Perhaps Microsoft believes that the rebates could hold it over to Titanfall's arrival, but I have serious doubts that it will be the Xbox One's salvation.