Social-network stocks have been battered, but elsewhere in Silicon Valley the tech world keeps getting bigger.

There was a lot to cover for tech investors last week, and this week is no different. Many of the tech world's biggest stories will continue to unfold for several weeks, but some headlines dominated the past few trading days, whether they involved unexpected earnings surprises, bold executive shakeups, or big money moves from your favorite tech companies. Let's dig into the biggest news of the past week now.

The fail whale cometh
Twitter (TWTR) had been flying high after its IPO thanks to a combination of high Wall Street interest and strong retail investor appeal, but that was largely undone by the company's terrible user-growth numbers for the fourth quarter. 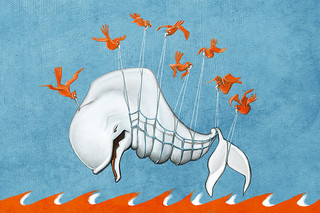 Not only did monthly active users barely grow from the third quarter, but Twitter's own made-up metric, "timeline views," also showed a decline from the third quarter, which means users are less engaged than they were -- in fact, they're now less engaged in the aggregate than they were in the second quarter even though there are 23 million more of them. At least Twitter's making more revenue per user, but that hasn't translated to the bottom line yet. The social network's stock lost almost a quarter of its value as a result of its earnings bomb, but there's an easy case to be made that it's still grossly overvalued.

It's not a good month for social-network stocks
Another social network also reported this week, but LinkedIn (LNKD.DL) didn't suffer as badly as its 140-character peer despite disappointing investors in its own way. The professional social network succumbed to the curse of high expectations, as its revenue projections for the quarter now under way turned out to be weaker than what Wall Street wanted, despite being 40% higher than the year-ago quarter's result.

While LinkedIn's adjusted EPS grew slightly year over year, its GAAP net income was weaker than 2012's on both a quarterly and an annual basis. However, LinkedIn's free cash flow remains strong, and its price-to-free cash flow ratio now stands at 158 -- not exactly cheap, but not as absurdly high as its P/E ratio has been.

An adventurous IPO
Big tech IPOs are back in vogue, as GoPro has reportedly filed "confidential" paperwork to go public this week. The maker of the popular camera for thrill-seekers -- Felix Baumgartner took a GoPro with him on a record-breaking freefall from 100 miles up last year -- is worth at least $2.25 billion based on a 2012 investment from China's Foxconn, and will likely hit the public markets at a significantly higher valuation.

Believe in yourself
The world's largest company can't find a better investment than itself. Apple (AAPL 4.86%) surprised the market by announcing, through the pages of The Wall Street Journal, that it had purchased about $14 billion of its own shares since releasing earnings two weeks ago. There are two ways to read this: Apple is sending the market a strong signal that there's now an effective floor on the price of its shares, or Apple can't find anything better to do with its great big gobs of money.

Fool contributor Ashraf Eassa takes a contrary position here by arguing that Apple should be concentrating on finding new avenues of growth rather than effectively plowing money back into itself. Are Apple's glory days over? This buyback might be the strongest signal yet that Apple has become a slow-and-steady value play rather than a growth superstar.

Game on!
Activision Blizzard (NASDAQ: ATVI) had one of its best days ever as a public company on Friday, after reporting market-topping results for its holiday quarter. The world's largest video-game maker is now more valuable than it's been in a quarter-century, according to numerous reports, thanks to the strength of Call of Duty: Ghosts on the next-gen consoles that made their debut this year.

Also important was news that Blizzard's flagship MMO World of Warcraft actually added subscribers on a sequential basis, which is something the company hasn't been able to say for some time. New games in the pipeline also excited investors, who chose to overlook the company's weak guidance for its in-progress first quarter in favor of taking the long view.

Tech on the rise
Energy stocks are slipping as tech companies continue to dominate the market's most-valuable rankings. On Friday, ExxonMobil briefly lost its spot as America's second most-valuable company to none other than Google (GOOGL 6.09%), which lost ground in late trading and now sits less than $2 billion in market cap behind the energy giant.

This is the second time ExxonMobil's lost out to a mobile superstar -- Apple's ascent to the top rung was huge news in 2012, and the iPhone maker remains comfortably in the lead after energy stocks slipped hard in 2013. Considering the rapidity of Google's rise and the weakness in ExxonMobil shares of late, it seems inevitable that Apple and Google will soon be duking it out for the top two spots. Can another tech company be far behind in the race for number three?

Alex Planes holds no financial position in any company mentioned here. Add him on Google+ or follow him on Twitter, @TMFBiggles, for more insight into markets, history, and technology.

The Motley Fool recommends and owns shares of Activision Blizzard, Apple, Google, and LinkedIn. We Fools don't all hold the same opinions, but we all believe that considering a diverse range of insights makes us better investors. The Motley Fool has a disclosure policy.

Why Salesforce Stock Was a Winner on Wednesday