Let’s discuss 3 key takeaways from Sanofi’s fourth-quarter earnings, and how competitors like Shire and Eli Lilly, and partners like Regeneron, could affect its growth in 2014.

Sanofi attributed its solid fourth-quarter bottom-line growth to strong sales of its long-lasting insulin Lantus, rising sales of its rare-disease treatments at its Genzyme unit, and a steady recovery in Brazil and China. However, weak performance from its vaccines and animal health units, exacerbated by unfavorable currency fluctuations, offset those gains. 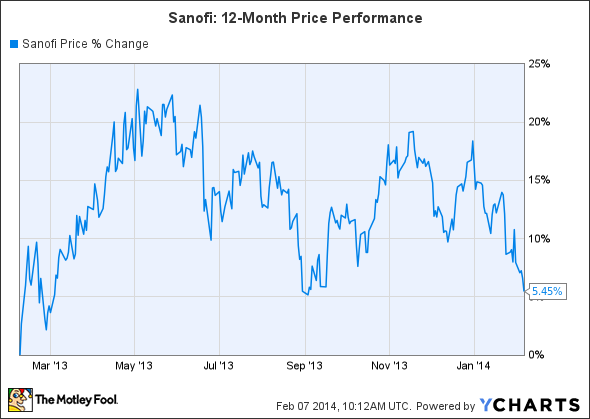 Sanofi has passed its dreaded "patent cliff" period (2011-2013), during which the company lost patent exclusivity of its top-selling drugs Plavix, Avapro/Aprovel, Lovenox, and Eloxatin, but some major challenges clearly remain.

Let's review three key things to know about Sanofi, and how rivals like Shire (NASDAQ: SHPG) and Eli Lilly (NYSE: LLY), and partners like Regeneron (REGN -1.06%) could affect its growth in the coming year.

1. The future of Genzyme
Sanofi acquired Genzyme for a whopping $20.1 billion in 2011. For the full year, sales at Genzyme rose 25.9% year over year to €2.14 billion ($2.91 billion), making it the company's fastest-growing business segment.

Of these treatments, Cerezyme, a treatment for Gaucher's disease, is clearly the most important to Genzyme's growth.

Gaucher disease is rare genetic disease that affects 1 in 50,000 to 100,000 people. The disease is caused by a lack of a certain enzyme that causes the accumulation of fatty acids in cells and organs.

Sales of Cerezyme rose 13.9% year over year to €688 million ($935 million) in 2013, but the problem is that sales appear to have peaked in 2008 at $1.2 billion. One notable challenger is Shire's Vpriv, which generated sales of $87.8 million in the third quarter -- a 17% jump from the prior-year quarter. While it's unlikely that Vpriv will ever overtake Cerezyme, it could steadily chip away at Sanofi's share of the Gaucher disease market.

Genzyme oral MS treatment Aubagio and the infused MS treatment Lemtrada are also having considerable trouble getting off the ground. Expectations for Aubagio are already low, with peak sales estimates around $620 million, since it has a less attractive side effect profile than Novartis' (NYSE: NVS) Gilenya and Biogen's (NASDAQ: BIIB) Tecfidera. As a result, peak sales estimates for Gilenya and Tecfidera are much higher, at $2.1 billion and $3.3 billion, respectively.

Meanwhile, Lemtrada was rejected by the FDA in December due to concerns about the structure of its clinical trials, although it has already been approved in 30 other countries.

The main problem, however, is that Lantus' U.S. patent will expire in February 2015. In December, Eli Lilly and Boehringer Ingelheim submitted a new drug approval (NDA) for LY2963016, their biosimilar version of Lantus, to the FDA.

Sanofi's response was desperate but tactical -- it sued Lilly for alleged patent infringements on January 31, triggering an automatic 30-month stay of approval by the FDA. In my opinion, Sanofi knows that it can't really win the lawsuit, but the delay could keep Lilly's biosimilar Lantus off the market until mid-2016. However, if Lilly wins the case before then, the 30-month delay will be cancelled.

This isn't the first time Lantus has been threatened by a potential competitor. Novo Nordisk's (NYSE: NVO) competing long-acting insulin, Tresiba, nearly broke into the U.S. market but was rejected by the FDA in February 2013.

3. Don't forget about Sanofi's investment in Regeneron
Many investors focus on Sanofi's growth in treatments for rare diseases and diabetes, but they often overlook Sanofi's 16% stake in Regeneron, which has rallied more than 60% over the past 12 months on robust sales of its eye treatment Eylea.

Sanofi and Regeneron are working together to develop a pipeline of fully human monoclonal antibodies for a wide variety of treatments. Two of the most promising treatments from their collaborative efforts are sarilumab and alirocumab.

Sarilumab is currently in phase 3 trials for rheumatoid arthritis. If approved, it could compete against blockbuster biologic treatments such as Johnson & Johnson (NYSE: JNJ) and Merck's (NYSE: MRK) Remicade, AbbVie's (NYSE: ABBV) Humira, and Amgen's (NASDAQ: AMGN) Enbrel. If approved, sarilumab is expected to hit peak sales of $3.1 billion.

Alirocumab is a new cholesterol treatment, which inhibits the production of an enzyme known as PCSK9, which is known to degrade the LDL ("bad" cholesterol) receptors on the liver that are responsible for maintaining LDL levels. Statins, which are widely used to treat high cholesterol, target a liver enzyme known as HMG-CoA to inhibit LDL production, but inadvertently raise PCSK9 levels instead. If alirocumab, which is in phase 3 trials, is approved, analysts expect it to hit peak sales of more than $3 billion.

Considering the blockbuster potential of these collaborations, Sanofi could raise its stake in Regeneron to 30%, which has prompted speculation that it might eventually buy the whole company outright (which Sanofi has repeatedly denied), as Roche (NASDAQOTH: RHHBY) did with Genentech back in 2009. Considering the blockbuster status of Eylea and its extremely promising collaborative pipeline, it might not be a bad idea.

The Foolish takeaway
In conclusion, Sanofi faces challenges ahead, but also has several longer-term catalysts that could eventually balance out its top-line growth.

Genzyme might be growing fast, but it still only accounts for 6.5% of Sanofi's top line. It will likely need to add a few more rare-disease or MS treatments to its portfolio to become truly significant to the company's revenue growth.

Investors should pay attention to the status of Lilly and Boehringer's biosimilar version of Lantus, which could sink Sanofi if it hits the market earlier than expected. Last but not least, I expect Sanofi to eventually increase its stake in Regeneron to 30% or more to tap into the blockbuster potential of sarilumab and alirocumab.

Leo Sun has no position in any stocks mentioned. The Motley Fool recommends and owns shares of Johnson & Johnson. We Fools may not all hold the same opinions, but we all believe that considering a diverse range of insights makes us better investors. The Motley Fool has a disclosure policy.