Please ensure Javascript is enabled for purposes of website accessibility
Log In Help Join The Motley Fool
Free Article Join Over 1 Million Premium Members And Get More In-Depth Stock Guidance and Research
By Jake Mann – Feb 9, 2014 at 9:42AM

Football's leaders often follow strategies similar to those used in the board room. Ted Sundquist, the former GM of the Denver Broncos, shared his top business lessons with me.

The NFL is one of the biggest businesses in the world. It makes more than $9 billion in annual revenue, and Forbes estimates each of the league's 32 teams spent an average of $240 million last season. As you might expect, football's most successful leaders often follow strategies similar to those used in the board room.

I talked to Ted Sundquist, the former GM of the Denver Broncos, about what he's learned from more than a decade of NFL experience. There are a few lessons that can be used by anyone in the business world.

Lesson No. 1: When searching for talent, pay attention to 'core makeup'
According to Sundquist, finding talent is "both an art and a science." From football teams to publicly traded companies, some are simply better at this than others. The best typically set a character type they're looking for, and find the top employees that fit that type, regardless of their exact job function. Taking Your Team to the Top, which Sundquist finished writing last year, discusses how NFL executives use this strategy.

"If you want a fast team ... you build speed throughout as a core component.... If you want an active team in the community ... you set character as a highly weighted [factor]." He says that this way, leadership can adjust its mission while still maintaining a standard "deemed essential to the identity of the team."

In the business world, companies will at times focus too much on the task required by the position to be filled and not ... the core makeup of the team member filling the position.... If [candidates] do not meet the standards of "who you are" as a business, then there is no reason to go forth with any further evaluation.

If an employee's underlying character is ignored, Sundquist says, "the job may be executed, but the problems that permeate off the individual ... ultimately affect the other members of the team."

Lesson No. 2: Make sure you have a mission
The GM told me that while interviewing for a job with an unnamed NFL team, he once asked its owner if he was prepared to supply the resources needed to win a Super Bowl. The owner's honest answer was, "Super Bowl? We don't say that word around here. Someone might hold us accountable and that would cause too much disruption."

As Sundquist points out, during his 16 seasons with the Denver Broncos, their mission "was to win a Super Bowl Championship each and every season."

Ted Sundquist with the Denver Broncos in 2002. Courtesy of The Football Educator.

"Everything we did," he says, "centered on completing that mission," and "everyone within the organization was keenly aware of how their efforts fit into the big picture." To him, a mission is crucial to any organization because without it, "employees would simply be lost in the ocean of objectives."

The mission statement, then, does three primary things, according to Sundquist: (a) It summarizes goals, (b) improves efficiency, and (c) maintains focus. These are usually constant no matter the business, whether the mission involves a brokerage trying to improve profit margins, a media company pushing for more page views, or a sports team searching for a championship.

Lesson No. 3: Develop your assets
That said, no goals can ever be reached if employee performance isn't maximized. Sundquist reveals his football experience taught him that the youngest generation of workers is in search of more than a typical job. He says most tend to want more from their leaders now, and that "the old ideas of 'give one up for the team' just don't resonate as they once did."

Younger players and employees want and need to know that they will be personally rewarded for their work, and if not, Sundquist has seen what can happen.

They begin immediately looking for an out when they feel the team and its leaders are not there to support them.... Without a clear direction ... these team members become complacent regarding their role toward mission accomplishment. In some instances, it takes only one downtrodden or disgruntled team member to destroy the efforts of the entire team.

Sundquist explains it is crucial that businesses "create an environment where all members feel as if they are ... seen as an investment rather than movable and disposable commodities." If this can be done, most begin to believe they are more valuable, and as a result, they work harder.

Lesson No. 4: Don't cram square pegs into round holes
This lesson's especially important for businesses after they undergo changes in leadership. When a company appoints a new CEO, or an NFL team hires a new head coach, many often clean house. But is this the best way to do things?

Sundquist isn't so sure, and believes any new leader should understand what talent they already have at their disposal. "Though at first glance they might not fit their old area of responsibility," Sundquist says, "they may have the qualities you're looking for to build a winner. Be willing to look outside of the box ... perhaps they fit better in a different position or department than the one they've toiled in."

Lesson No. 5: Execute your game plan
Lastly, Sundquist talked to me about execution. He says that you can prepare all you want, but the game plan must be standardized so everyone can understand it.

Taking Your Team To The Top chronicles how this lesson came to be:

I began to revamp the Denver Broncos' scouting process in the early '90s.... Evaluation reports were often as varied as 31 flavors of ice cream.... By instituting a standardized game plan, not only on the field, but also in the draft room, scouting evaluations suddenly began to focus on the needs and requirements of the team....The process was no longer tainted by individual emotion or bias.

At Denver, Sundquist gave everyone a "Scouting Bible" that detailed his game plan, and although most leaders might not call it that, any guide shares similar characteristics. 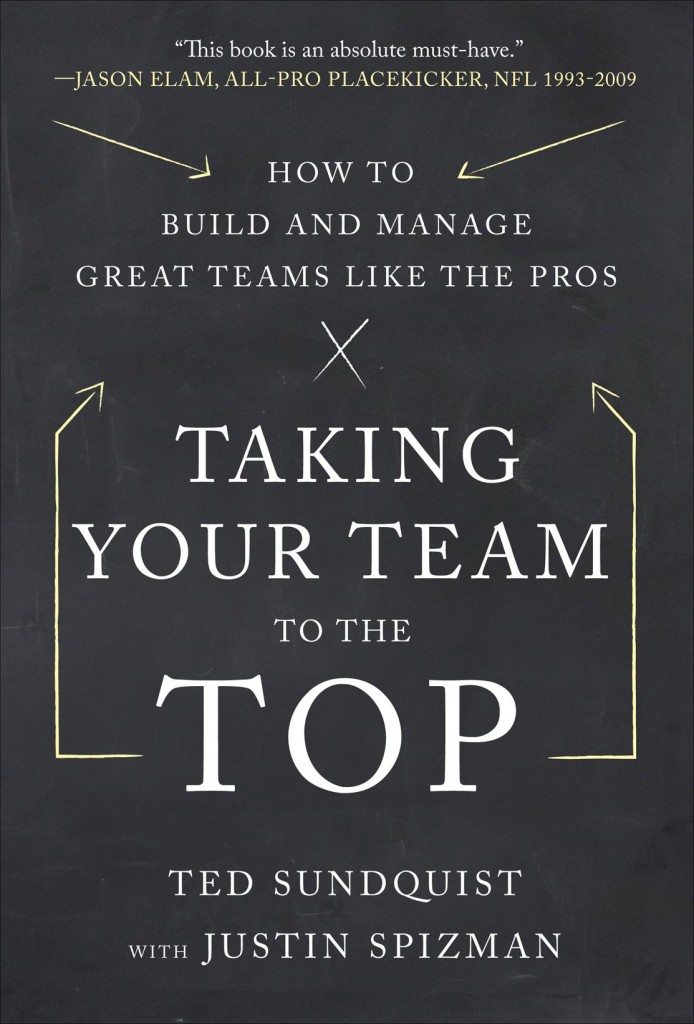 Courtesy of The Football Educator.

Final thoughts
Many kinds of organizations can learn a thing or two from Sundquist's experiences as a GM. The Miami Dolphins are one team I believe should pay close attention to Lesson No. 1, due to their ongoing issues with locker room chemistry.

Outside of the NFL, companies like Microsoft (MSFT -1.94%), Wal-Mart (WMT -1.93%) , and BlackBerry (BB -2.08%) have appointed new CEOs over the past few months, and I expect each will attempt to avoid cramming square pegs into round holes, as Sundquist puts it.

There are many other applications for these lessons, but they all boil down to one underlying truth: The strategies your favorite sports team uses to win games might be the same tactics you can use in your career, or for identifying winning companies and investments.

Jake Mann has no position in any stocks mentioned. The Motley Fool owns shares of Microsoft. Try any of our Foolish newsletter services free for 30 days. We Fools may not all hold the same opinions, but we all believe that considering a diverse range of insights makes us better investors. The Motley Fool has a disclosure policy.