Please ensure Javascript is enabled for purposes of website accessibility
Log In Help Join The Motley Fool
Free Article Join Over 1 Million Premium Members And Get More In-Depth Stock Guidance and Research
By Daniel B. Kline – Feb 9, 2014 at 8:45AM

Despite its popular Super Bowl commercial, RadioShack is struggling to find a business plan that connect with customers.

RadioShack (RSHCQ) is a brand in trouble, which the company more or less admitted by poking fun of itself during it Super Bowl commercial.

The ad, which featured appearances by '80s icons including Dee Snider, Erik Estrada, Hulk Hogan, Mary Lou Retton, and ALF, among others, mocked the chain for its decades-old styling. The commercial ended with the '80s stars dismantling a typical RadioShack and replacing it with a cleaner, less cluttered store.

Unfortunately, while anyone who has visited a RadioShack recently appreciates the idea that the chain needs an update, nicer retail displays and snazzier employee uniforms only solve a tiny piece of the problem. A much bigger issue is that whereas RadioShack was once the place for wires, batteries, cassette tapes, and other electronics miscellanea, that role has largely been made irrelevant by the Internet. Why buy an HDMI cable for $16.99 from RadioShack, when Amazon.com (AMZN -0.77%) will have it to you in two days for $6.97?

A tough job for any CEO

When Joseph C. Magnacca joined RadioShack as CEO about a year ago, the former Walgreen exec took the reins of a fading brand that was not only losing relevancy, it was losing money. Some of that could be blamed on the economy, but, RadioShack also faced increasing competition -- not just from online retailers, but from chains like Best Buy (BBY -1.41%), which began to stock more of the accessories (and at better prices) that had always been RadioShack's bread and butter.

"The price transparency within the consumer electronics sector makes it much harder for the company," said Scott Tilghman, an analyst at B. Riley & Co. in Boston to Bloomberg at the time of the CEO's hiring. "Merchandising remains a big challenge, handicapped by the company's small stores. I think it's a tough go for any executive."

How big a hole? 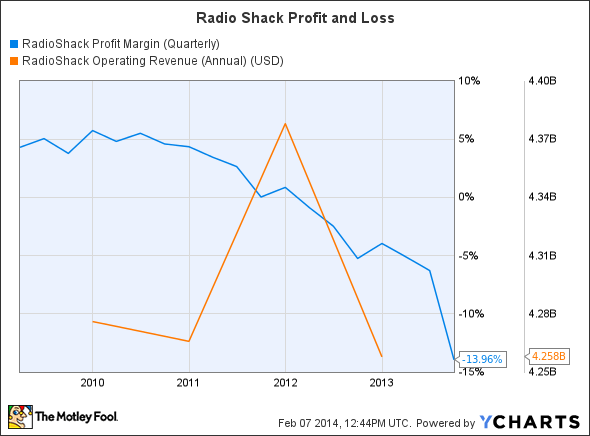 As you can see from the chart above, Magnacca, the chain's fourth CEO in three years, took over a losing company and, in his short time at the helm, has failed to turn it around.

Admitting your product stinks and that you're going to fix it has worked for others companies in the past. Most recently, Domino's (DPZ -0.68%) began a campaign in 2009 where it acknowledged that its pizza did not have the best reputation. In slowly rolling out changes, including a new pizza recipe, the chain managed to change its reputation and grow its sales.

The strategy, however is fraught with risks as, Domino's CEO Patrick Doyle told QSR Magazine at the time the strategy was launched.

"There was clearly no Plan B on this," Doyle says. "You can't go out with the communication strategy that we did and have that not work. If that doesn't work, there's no way to fall back from that. The confidence came from knowing absolutely 100% that we had a better pizza."

While the company is touting its new future, it's also making some tough choices. The Wall Street Journal reported Feb. 4 that the company plans to close 500 of its 4,500 stores. Those closings, which the company has not confirmed, would be in line with a statement Magnacca made in late 2013, which hinted at keeping a large footprint while also getting a little smaller.

"I think we're a 4,000-plus network," Magnacca said in a November interview with the WSJ. "My job is to make sure that we've got the market covered."

In addition to revamping its stores to give them a modern look, the company is launching new brand positioning based around the tag line, "It Can Be Done, When We Do It Together." According to a company press release, "the new positioning speaks to the brand's ability to collaborate with consumers to help them discover what is possible through technology."

Basically, RadioShack will be attempting to bring in customers on the idea that it has knowledgeable employees who can help bring consumers' ideas to life. That's a crowded market space with Best Buy pushing a variant of that idea with its Geek Squad service. It's also a gamble in that the campaign might attract people who want free advice and then use it to buy items online or at cheaper retail competitors.

The company is also freshening its merchandise, focusing on cell phones and gadgets like headphones and smartphone cases. That makes more sense than the company's previous mix of outdated accessories and cheap radio control toys, but it's a very competitive area already well-served by bigger retailers and the Internet.

RadioShack can make fun of itself and tell customers it has changed, and that may bring in some people to sample the "new" RadioShack. But if all that greets those customers is a better-looking store with improved merchandise and customer service that's like a tiny Best Buy with higher prices than Amazon, it's hard to see the brand making a major rebound. Hulk Hogan may disagree, brother, but these moves seem a lot like a quote from his commercial pal ALF. "Trust me on this one, I've been wrong so many times before."

Can Entrepreneurs and Inventors Save RadioShack?

Why RadioShack Can't Close Stores, Even Though It Should

How the Internet of Things Can Save RadioShack