Big Lots, Dollar General, and Family Dollar are fighting it out in a difficult market, but which is a better investment?

Discount retail remains a busy market segment irrespective of the economic environment. When the economy is struggling and consumer confidence is low, discount retailers are preferred destinations for their "value for money" deals. Let's take a look at Big Lots (BIG 3.67%) and the value it holds for investors when stacked up against other discount retailers like Dollar General (DG -0.14%) and Family Dollar Stores (FDO.DL).

Analyzing Big Lots
Big Lots has had a roller-coaster ride despite recording top-line growth, and it has been a laggard as compared to peers as shown in the chart below. 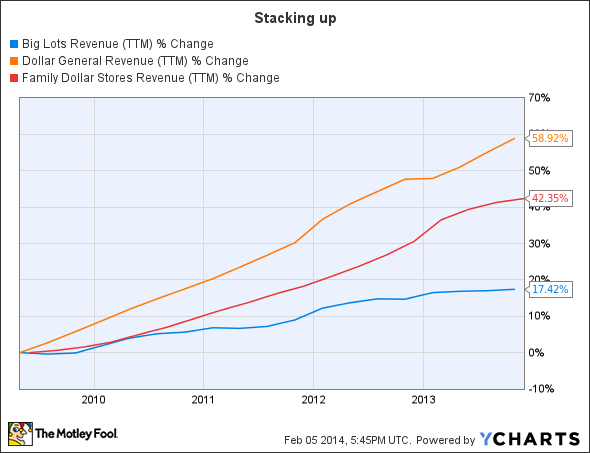 Whereas fueling revenue growth by investing in new stores is good, if the comps aren't improving, then it means that the company is not connecting well with its target customers. Instead, that company is probably resorting to capital-intensive means to drive top-line growth.

In the third quarter, the U.S. and Canadian comps declined by 2.5% and 0.9%, respectively, as compared to the comparable period last year. Its consolidated comps declined 2.5% versus the year-ago quarter.

Worse, Big Lots offered a very conservative outlook going forward. For the fourth quarter, it expects revenue to decrease 6%-8% while comps are expected to decline in the low-to mid-single digit range. This was enough to spook investors. As a result, the stock has taken a terrible beating on the market since then, losing almost 33% from its peak.

Big Lots' consolidated adjusted loss per share came in at $0.16 in the previous quarter. Going forward, Big Lots has decided to exit the non-profitable Canadian market in order to bolster its chances of competing with bigger industry rivals like Target, Wal-Mart Stores, and Dollar General. Big Lots is also trying to focus on bolstering areas such as e-commerce and its omnichannel capabilities, but as evidenced by its muted guidance, these initiatives aren't going to be adding up favorably any time soon.

What are peers up to?
On the other hand, Dollar General has been on a roll and leads the pack when it comes to revenue growth over the past five years. Whereas Big Lots suffered a comps decline across all of its markets, Dollar General registered comps growth of 4.4% in its third quarter. In fact, every week in the quarter displayed positive comps growth. Both traffic and average ticket size increased for the 23rd consecutive quarter, and this shows that the company is connecting well with its consumers.

On the heels of traffic-fueled comps growth and the opening of 577 new stores during the first nine months of 2013, third-quarter sales increased 10.5% over last year to $4.4 billion. Dollar General's market share in the consumables segment has increased steadily throughout the past 52-week period, as per Nielsen data for October. This is important because the consumables category accounts for about 75% of total revenue. Going forward, Dollar General is confident it can achieve 10% to 10.5% revenue growth versus the previous fiscal period on the back of 4% to 4.5% year-over-year comps growth.

Family Dollar's revenue growth over the past five years has been more than twice that of Big Lots' as shown in the chart above. However, recently, it seems to be struggling. Comps stayed flat against the company's earlier expectations of 2% growth. Management isn't optimistic for 2014. Comps are expected to decline in the low-single digit range during the first quarter. Family Dollar is expecting earnings in the range of $0.65 to $0.75 a share for the first quarter and between $3.80 and $4.15 per share for fiscal 2014.

Bottom line
Of the three, it looks like Dollar General is in the best position due to its comps growth and aggressive expansion. The company is gaining market share in the important consumables category and looks set for further growth. Big Lots could prove to be a good investment as well, but investors should wait for the company to return to positive comps growth.

Meetu Anand has no position in any stocks mentioned. The Motley Fool has no position in any of the stocks mentioned. Try any of our Foolish newsletter services free for 30 days. We Fools may not all hold the same opinions, but we all believe that considering a diverse range of insights makes us better investors. The Motley Fool has a disclosure policy.

Why DouYu Stock Was Up Earlier Today