Industrial giant 3M is seeing good growth in its largest segments, and its outlook is for better conditions in other segments.

A mega-cap industrial like 3M (MMM 1.20%) is never going to escape being tied to global economic growth. However, 3M shareholders can expect the management to generate every piece of operational efficiency and growth that it can out of its sprawling empire. Fortunately, 3M's management is doing a pretty good job of it in the middle of a slow global economy.

3M reports mixed geographic results
A company of 3M's market size and geographic reach will never see all of its parts firing on all cylinders at the same time. In its fourth quarter, it was the turn of its emerging market results to come in with disappointing results. In particular, Latin America was weaker than expected with just 2.2% growth in constant currency. Meanwhile, Asia-Pacific grew 3.3% in constant currency.

In a reversal of trends in recent years, the U.S. and the Europe, Middle East, and Africa, or EMEA, region came in with 4.5% and 3.4% organic constant currency growth, respectively. Both figures are higher than those for the emerging markets. In other words the current market dictum of "developed world good, emerging world bad" was neatly replicated in 3M's results. I

The market has stressed about emerging markets of late, and in particular about South America. For example, white goods manufacturer Whirlpool (WHR 1.50%) has been aggressively sold off on fears over its Brazilian exposure. Indeed, its management recently forecast that the Latin American region appliance industry would be flat in 2014, but it expected to grow revenue thanks to gaining market share. Weak conditions in Latin America are an issue for Whirlpool, because it generated a third of its total segmental profits (before corporate eliminations) in its last quarter.

Venezuela and Argentina have a significant amount of political and currency risk right now -- in fact currency effects turned reported growth in 3M's Latin America and Asia-Pacific regions into negatives. They are also concerns for 3M, but management outlined that the two countries are responsible for less than $200 million in revenue each. This is a small figure compared to 3M's 2013 revenue of $30.9 billion.

Furthermore, when questioned on the subject of Venezuela and Argentina by an analyst on the conference call, CEO Inge Thulin replied, "I think there's event risk that could put the exposure from an earnings perspective into the $0.03 to $0.04 a share range." It's hardly a significant figure when compared with 3M's forecast of EPS of $7.30-$7.55 for 2014.

All told, 3M's revenue outlook was reduced. At the outlook meeting in December, its forecast for growth in the region was 8%-11%, but in the recent conference call this was reduced to "along the lines of the low end of that range of 8% to 11%". However, the full year EPS outlook was kept the same. 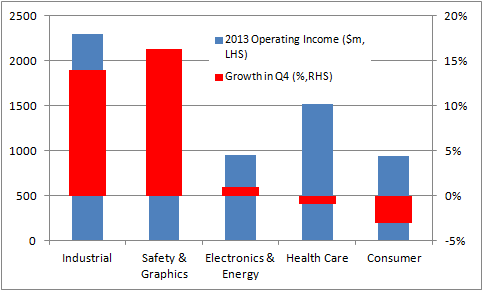 The good news is that its two largest segments are growing the most, and overall operating income was up an impressive 9.4%.

Moreover, the manufacturing sector can take heart from 3M's industrial results. Its industrial division generates 46% of its sales from adhesives and tapes and abrasives; products usually seen as dependent on short cycle orders, and therefore a good indicator of current manufacturing conditions.

Interestingly, the electronics and energy segment is expected to grow at 2%-6% this year, pretty much in line with the overall company guidance of 3%-6% in sales growth. 3M's plans involve shifting revenue toward energy within the segment. Safety and graphics is doing well and may see some upside if commercial construction improves in 2014, while consumer revenue was up against a tough comparison of 9% organic growth in 2012.

Roles reversed in health care
The health care segment is the standout, because the geographical dynamics are reversed here. A slew of companies, from medical device company Covidien (COV.DL) to the medical division of General Electric (GE 0.22%), have reported that emerging market spending on health care remains strong, while developed market spending is moderate at best. GE reported flat health care orders in its last quarter while Latin America and China orders were up 15% and 8%, respectively.

Such conditions reflect the greater necessity for austerity measures in the developed world, while the emerging world needs to increase the quality of its health care provision. Covidien is one of the best health care plays in this regard, because its solutions are relatively low ticket and many of them help hospitals to reduce costs. Moreover, Coviden is expanding aggressively in the BRIC countries. Similarly, 3M reported 10% growth in developing countries in the fourth quarter.

The bottom line
In conclusion, Latin America was a disappointment but 3M kept its full-year earnings guidance constant. Moreover, its management initiatives, such as its enterprise resource planning roll out and continued investment in research and development, promise to continue to improve operational efficiencies and generate growth in the future.

It's a well-run company that looks set for the magic mega-cap formula of single-digit-revenue growth with double-digit-earnings growth for the next couple of years. On a current P/E of more than 19 times earnings, it's not very cheap, but it has decent growth prospects and a 2.7% dividend yield, as I write. Provided that the economy holds up in 2014, the stock can do well.