Yahoo! may be working to develop its own search engine and saying goodbye to Microsoft's Bing partnership. Will Yahoo! alone be able to remain competitive against Google in the search engine arena?

Yahoo! (NASDAQ: YHOO) is rumored to be planning a return to the search market, currently dominated by Google (GOOGL -0.14%). Yahoo! is said to be working on two projects that will allow the company have its own search engine.

Yahoo!'s aspirations to have its own search engine suggest that the company may have gotten tired of its long-term search and advertising contract with Microsoft's (MSFT -0.92%) Bing, which currently provides Yahoo's organic search results and related search advertising. However, capturing a bigger share in the fierce search market may prove to be difficult, as Google is hovering around 67% market share, thanks to its unique search technology and massive network of advertisers. Why does Yahoo! want to get back in the search engine game? 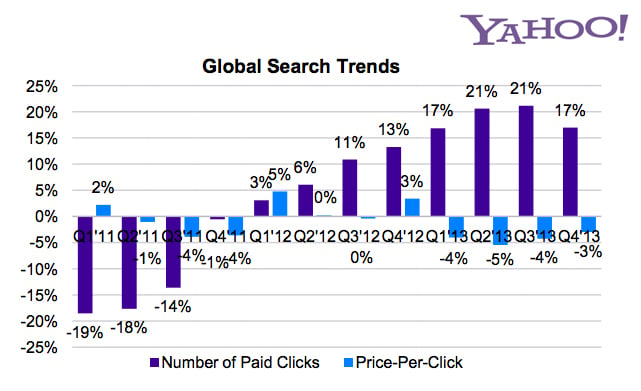 The Microsoft-Yahoo search ad deal
In 2009, Yahoo! partnered with Microsoft Bing in order to get scale advantages in the war against Google. The deal with Microsoft handed over control of Yahoo!'s organic results to Bing. As a result, the combined advertising marketplace made up of Yahoo!, Bing, and other syndicated partner sites -- including Facebook and CNBC -- allowed Yahoo! to indirectly control 29% of the online search market in the U.S.

To make matters worse, in the past few quarters, Yahoo! has experienced decreasing rates in the number of paid clicks, price per click, and price per ad sold in its search engine business unit. Moreover, despite the decrease in price per ad sold, the number of ads sold has not seen a meaningful increase in the past two years. It increased by 3% in the latest quarter. According to comScore, Yahoo!'s share in the U.S. search market fell 0.4% from November to December.

From now on
Aware of the fact that the partnership with Microsoft isn't delivering, Yahoo! may be developing a full search engine that's oriented to mobile, according to popular tech columnist Kara Swisher.

This is a big risk for the company, which gets roughly 31% of its total revenue from search. If Yahoo! manages to get out of the search partnership with Microsoft, it will have to fight alone against Google, which has more technological and scale advantages than any other competitor in this field.

On the tech side, Google spends far more in search technology and data mining than any other search engine. The company actively supports university research related to search technology across the globe. It has teams in China, Australia and North America whose only mission is to build and maintain relationships with universities. More important, on the business side, Google has built a huge database of publishers -- in Google AdSense -- and clients -- in Google AdWords -- in order to control most of the supply and demand in the global search market.

To compete against Google, it seems Yahoo! will need to develop something quite unique in terms of technological features, and at the same time, target a very specific market segment, like developing a search engine optimized for a certain kind of smartphones.

Final Foolish takeaway
Yahoo! may be building its own search engine to prepare for the end of the partnership with Microsoft's Bing, which will expire on April 1. On one side, it's important to note that the partnership was not successful in stealing market share from Google. But on the other side, Yahoo! will soon be on its own against Google.

This is a big risk, considering that roughly 31% of Yahoo!'s revenue comes from search, and that Google has plenty of scale and technological advantages. In this difficult context, in order to release a successful search engine, Yahoo! may need focus on a specific market segment, apart from developing unique technology.

Adrian Campos has no position in any stocks mentioned. The Motley Fool recommends Google and Yahoo!. The Motley Fool owns shares of Google and Microsoft. Try any of our Foolish newsletter services free for 30 days. We Fools may not all hold the same opinions, but we all believe that considering a diverse range of insights makes us better investors. The Motley Fool has a disclosure policy.