ExxonMobil's market-cap duel with Apple has come to an abrupt end. Another tech giant has pushed Exxon down to third place.

ExxonMobil (XOM -0.35%) and Apple (AAPL -1.96%) have been playing their own game of thrones in recent years. One of these stocks holds the largest market cap on the stock market, followed by the other, since 2011. It's an epic battle to stir the blood and quicken the pulse -- if you keep an eye on such market metrics, at least. 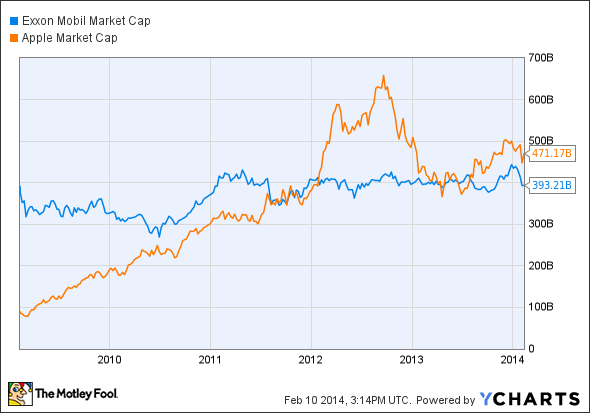 But things have changed. Coming up from behind, Google (GOOGL -1.02%) has claimed the second place in the market-cap race, pushing Exxon down to the third spot. Exxon remains the largest market cap on the Dow Jones Industrial Average (^DJI 0.45%) because neither Apple nor Google belong to that exclusive index, but now it's only the third most valuable business on the stock market. 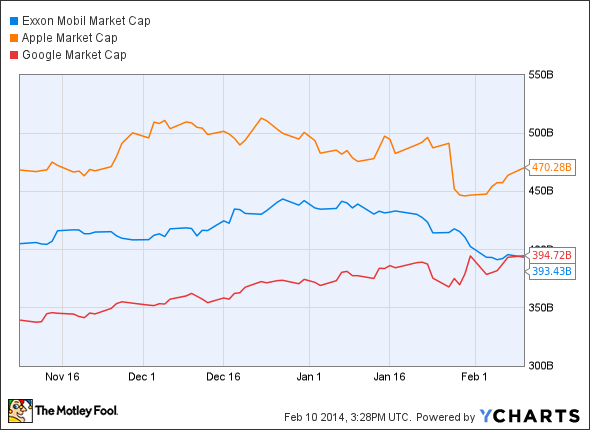 So what's behind this shift at the top? A couple of things.

Google shares went through some hard times in recent years, trading behind the Dow between 2010 and 2013. Not for a lack of business performance, mind you, but investors kept compressing Google's valuation multiples for several reasons. 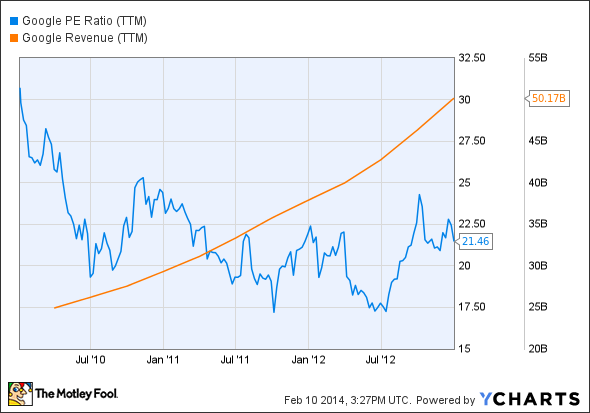 For one, Apple always played the more profitable hand in the mobile wars, leaving Google and its Android platform the lion's share of sales but only table scraps of profit. This is how Apple claimed the very top spot in the market cap marathon, and a key reason why Google didn't join the cap leaders.

Moreover, Google skeptics take a dim view of the company's business model in general. The barriers to entry in online search and advertising seem vanishingly low; surely, Google must be ripe for replacement by the next hungry upstart with a better idea?

But as it turns out (and don't call me Shirley), Google isn't exactly resting on its laurels. Big G's own research keeps the eponymous search engine relevant despite the best efforts of technology leaders and upstarts alike to topple the apple cart. Google's advertising machine has no equal so far.

And when serious threats do materialize, Google isn't afraid to haul out the wallet and buy its way to online dominance. YouTube is a classic case study of this strategy, and the $3.2 billion Nest Labs buyout shows that Google remains committed to protecting its future by any means necessary.

In 2013, Google investors started giving the stock some credit for this long-term vision, and the rest is market history. Google shares have gained 52% over the last 12 months while the Dow only climbed 13% higher.

Of course, Exxon has underperformed the Dow recently, with only breakeven returns over the last year. Oil prices have slowed down their once-unstoppable skyward climb, and the developed world is starting to get comfortable with the idea of using less black gold.

Fellow Fool Travis Hoium calls Exxon one of the worst Dow stocks for 2014, suggesting that the oil giant may not be involved in that old race with Apple for the foreseeable future.

With Google on an undeniable upward trajectory and Exxon slowly fading, it's time to get used to technology stocks ruling the market again. And neither one of the top two stocks is likely to join the Dow anytime soon.