VF Corp (VFC 1.72%) has an impressive accomplishment to its credit -- it has raised its dividend for the last 25 years. It also had a great 2013, much like its peer Phillips-Van Heusen (PVH 2.51%), and both have outperformed Ralph Lauren (RL 2.21%), which is another player in this space. Let's take a look at the underlying business of VF Corp and see how it stacks up against its peers.

A closer look
VF Corp is a global leader in branded lifestyle footwear and apparel. It owns more than 30 brands including popular ones like The North Face, Vans, Wrangler, Timberland, and Lee, among others. It is this diversity of brands and a global presence that have enabled the company to consistently perform well and this is reflected in the chart below. 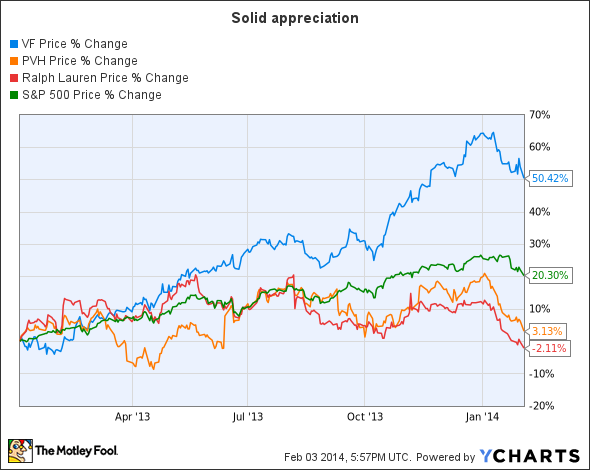 VF Corp continues to fire on all cylinders. In its estimate-beating third quarter, it clocked revenue of $3.3 billion, 5% more than the year-ago quarter . Revenue growth was fueled by strong performance in all global regions and across both its wholesale and direct-to-consumer, or DTC, businesses. The performance at brand levels was also excellent with 14 out of the top 15 brands growing on a global basis. On the heels of robust revenue growth, earnings per share came in at $3.89 to beat the consensus estimate.

VF Corp's five-year growth plan focuses on four powerful strategic actions: leading through innovation, connecting with consumers, serving those consumers directly, and expanding geographically. The company laid out this plan in June of last year, and since then it has been executing well.

For example, in the third quarter, the international business contributed 40% of total revenue and the DTC business contributed 19% of revenue, with all results trending up and tracking well against the company's five-year goals. Going forward, this plan will be a good long-term growth driver.

Innovation and marketing driving growth
As far as VF Corp's innovation is concerned, Thermoball is a great example. The product has already had a very strong sell-through in the DTC channel. The company is rolling out an exclusive in-store concept at 300 Dick's Sporting Goods locations that features Thermoball as a part of an overall brand shop in its seasonal outerwear pad. Other examples of innovative products include the two new Pro Skater shoes. VF Corp's innovative product pipeline will remain a good growth driver going forward.

VF Corp also aims to connect with its target consumers through a Never Stop Exploring campaign across mediums that include TV, print, digital, and in-store. This emotional brand campaign aims to personalize the meaning of outdoor exploration and the company is confident that this will intensify its connection with a wide range of North Face consumers and help sustain the growth momentum of its outdoor and action sports segment. The outdoor and action sports division represented 60% of third-quarter revenue.

The company has also paid off the $400 million in debt associated with the Timberland acquisition. VF Corp acquired the Timberland brand two years ago in a $2 billion deal that created a $10 billion apparel & footwear giant focused on outdoor and action sports. The company is celebrating the brand's 40th anniversary as a way to connect consumers and fuel the growth of this brand going forward.

Are peers better?
It's not just VF that shops for growth. PVH's Warnaco Group acquisition was one of the main growth drivers in its third quarter. As a result of this acquisition, the high-margin Calvin Klein North America retail business registered more than twofold growth as sales rose to $799.7 million from $319.6 million in the comparable quarter a year ago.

PVH's strategy for growth also focuses on boosting sales of high-margin items across the globe. In line with this, PVH has inked deals with Axis Golf to market and distribute IZOD brand products across Australia, New Zealand, Fiji, and other South Pacific islands. In addition, PVH has also struck a joint-venture deal with Gazal to expand the Calvin Klein brand's reach across Australia, New Zealand, and the South Pacific nations and islands.

Ralph Lauren is a clear laggard among the three. However, it has also done well during the economic recovery, growing revenue every year since 2011 . Its better-than-expected second-quarter results were fueled by improved performance across its wholesale and retail businesses. As a result of improved sales, Ralph Lauren's earnings came in at $2.23 per share, better than what analysts had expected. However, as a result of margin contraction, this was 2.6% lower than the company's earnings in the year-ago quarter. The company expects improvement in the third quarter with revenue growth of 8%-10%.

Bottom line
Of these three, VF Corp looks best placed for the long run. Ralph Lauren's weak performance makes it worth avoiding for now, while PVH is quite expensive with a P/E ratio of 38.74. In comparison, at a P/E of 21.6 VF Corp is considerably cheaper. Its innovative pipeline and marketing moves should ensure long-term growth, making it a good buy.