At first glance the earnings at Huntington Bancshares Incorporated weren't what many had hoped for, but when compared to Fifth Third Bank and KeyCorp, there is one critical reason why.

With the dust settled on earnings seasons, there is one major takeaway from Huntington Bancshares (HBAN -0.83%) every investor should take note of.

Banks like Huntington are in an interesting place. At last count, it was the 37th largest bank in the US by assets, meaning it often has to be selective about its growth opportunities, and doesn't operate on nearly the same scale and magnitude of some of its principal competitors.

But when you consider almost 80% of its deposits are held in Ohio and Michigan, there is no denying Huntington is a regional bank in the truest sense of the word.

And while banks everywhere were reporting a dramatically better year in 2013 compared to 2012, that unfortunately wasn't the case for Huntington, as it actually saw a decline in net income on the year.

First glance may be deceiving
"We are pleased with our year-end results, which demonstrate again that our strategies are working," said Huntington Bancshares CEO Stephen D. Steinour, of the results in the fourth quarter. "Huntington's performance in the second half of 2013 demonstrates strong business momentum, positioning us well for 2014."

But a quick glance at the bottom line of income growth at Huntington certainly leaves something to be desired when compared to other Ohio-based peers KeyCorp (KEY -0.91%) and Fifth Third Bank (FITB -1.45%):

Yet buried at the bottom of its earnings release Huntington shows the biggest reason for its drop in income resulted from its mortgage banking operations, where income plummeted by 34%, or nearly $64 million in 2013: 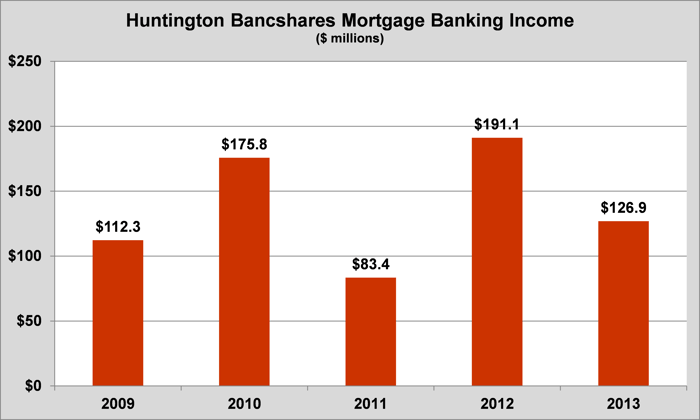 Compare that to KeyCorp where the percentage drop was larger (52.5%), but the $40 million to $19 million drop could largely be classified as inconsequential relative to its $1.8 billion in noninterest income. And while mortgage banking also dipped at Fifth Third, from $845 million to $700 million, the decline of 17% was less dramatic.

What to make of it all
The reality is, as a result of the refinancing boom that swept the country in 2012, Huntington was a major beneficiary. This translated directly to the bottom line income of the company, and was one of the key reasons its total net income rose 18% from $543 million to $641 million in 2011 to 2012.

Yet at the same time, the exact opposite happened in 2013, and the fall in net income was almost entirely attributable to shrinking mortgage banking income as shown in the chart below:

The mortgage business is a significant part of Huntington, and its drop shouldn't be discounted, but the big decrease in earnings is more the result of a great 2012 than a poor 2013.

Patrick Morris has no position in any stocks mentioned. The Motley Fool owns shares of Fifth Third Bancorp, Huntington Bancshares, and KeyCorp. We Fools may not all hold the same opinions, but we all believe that considering a diverse range of insights makes us better investors. The Motley Fool has a disclosure policy.