Boeing disappointed the market with its guidance, but its order book and airplane delivery rates are the key to its performance in 2014.

There are two key questions that Foolish investors will be asking after Boeing's (BA 0.26%) latest results. The first is what is its order book going to look like in 2014? The second is whether its disappointing earnings per share, or EPS, guidance of $7.00-$7.20 for 2014 signals a slower delivery schedule or not?

Boeing's order book prospects in 2014
Essentially, Boeing's orders are a proxy for global economic growth. However, they are also guided by industry fundamentals. The good news is that the commercial aviation sector is in better shape than it has been for many years. For example, in December the International Air Transport Association, or IATA, increased its forecast for airline profitability in the coming years. 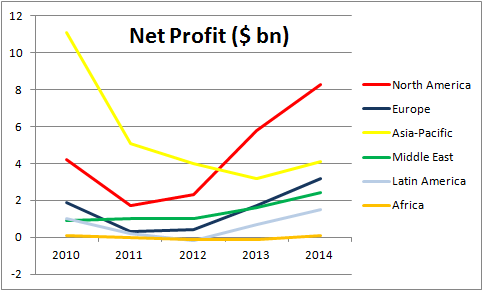 North America is expected to lead the way, and every other region is expected to increase profits, too. All of which marks a remarkable turnaround for an industry that struggled to make money in previous years. Indeed, this is a crucial point for Boeing, because there is a strong relationship between airline profitability and its orders. 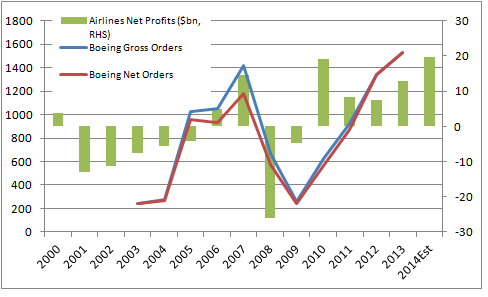 Second, the difference between gross orders (blue line) and net orders (red line) represents orders that were cancelled in the year of the order. This graphic nicely illustrates that airlines will cancel or defer orders if the economy slows. In other words, you can't just listen to Jim Cramer screaming about the strength of  Boeing's order book and conclude that the company is immune from the economy.

Third, the industry is dealing very well with oil prices being around $100. In fact, Boeing is experiencing increased demand from airlines wanting fuel-efficient aircraft.

Boeing's delivery rate
Orders are one thing, and Boeing's ability to make money from them is another. On the evidence of analyst questions on the conference call, its earnings and cash flow forecasts for 2014 were a bit of a disappointment. Going into the call, analysts had a target of around $7.60 in EPS for 2014, but Boeing's management guided toward $7.00-$7.20. It's never good news to see a company guide lower than the market -- and the stock was promptly sold off on the news -- but Foolish investors need to appreciate that airplane delivery rates can be very lumpy.

In addition, Boeing has had widely publicized production problems with its 787 Dreamliner in the past, and it's understandable if its management feels the need to be conservative in its forecasting. Having achieved record deliveries of 648 in 2013, management predicted that it would deliver 715-725 planes overall in 2014. Within this figure, Boeing expects 110 deliveries of its 787 plane; a figure below its intended run rate of 10 deliveries every month for the 787. Indeed, Boeing is trying to manage as transition in increasing production from seven to 10 planes with the program, and this aspect of its production seems to carry the greatest risk for the company.

Boeing's 737 is a mid-range, narrow-bodied aircraft that represents the workhorse of many airlines worldwide. In fact, it contributed 1208 of its 1531 orders in 2013. Boeing is looking to increase its production rate from 37 a month to a rate of 42 by the end of the year. It certainly needs to keep its 737 customers happy, because it faces increasing competition from Bombardier's (BBD.B 2.85%) new CS100 plane and from its traditional rival, the Airbus A319. Bombardier has aggressive plans for the CS100 ; however, it is facing production difficulties of its own after having to push back the date when it enters service to the second half of 2015, from its original estimate of 2014. This is obviously good news for Boeing and Airbus.

The bottom line
All told, Boeing looks set for a good year, but faces execution risk due to its plans to ramp up production on the 787 and 737. It's an inevitable consequence of the pressure to increase deliveries of ever more sophisticated aircraft. In order to stay up-to-date, Foolish investors should monitor Boeing's delivery reports, which are lovingly detailed on its website, and look out for the ramp-up to 10 a month for the 787, and 42 for the 737. Meanwhile, if the global economy holds up, then airline profitability will too, and Boeing can expect strong orders in 2014.