Eagle Rock Energy Partners (NASDAQ: EROC) is making a monumental shift in business strategy, moving from a midstream/upstream hybrid model to a pure-play upstream oil and gas producer. This means investors holding on to its unit need to familiarize themselves with the new core operating business. Here are three charts that will help investors understand the numbers that matter.

Production mix
Investors need to know what kind of production to expect going forward from what is now a pure-play exploration and production company. Eagle Rock now has 350 billion cubic feet equivalent of natural gas weighed reserves, which should produce at the current rate for about the next 13 years.

In the following chart comparing Eagle Rock Energy Partners to some similar-sized peers, we see that the company's production is fairly balanced. 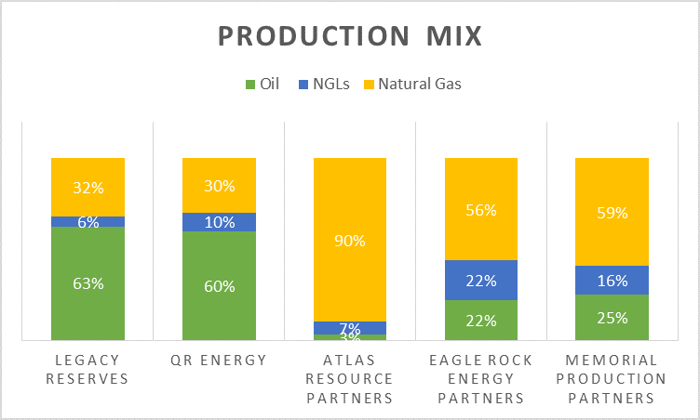 Eagle Rock's production and reserve mix is pretty equally weighted between liquids and gas, though it does skew toward natural gas. While the company isn't as oil rich as QR Energy (NYSE: QRE), neither are anywhere near as natural-gas heavy as Atlas Resource Partners (NYSE: ARP).

That said, investors can expect this mix to shift over time, so this is an area to keep an eye on. Atlas Resource Partners, for example, has been taking advantage of cheap natural gas prices to aggressively add to its natural gas reserves. Meanwhile, QR Energy's most recent deals have been for oil properties. Eagle Rock Energy Partners might become more aggressive on the acquisition front, as its deal to shed the midstream business will free the company's balance sheet up so that the company can pursue new deals.

In addition, the company's drilling program in Oklahoma will organically add liquids-rich reserves and production. Its development is focused in the area known as the SCOOP. Investors will want to keep an eye on this area to see if there is a noticeable shift toward liquids in the company's production mix.

Locked-in cash flow
With the company's distribution being cut in the past, investors will want to be sure that its future payout offers some sort of stability. The following two charts should ease those fears. 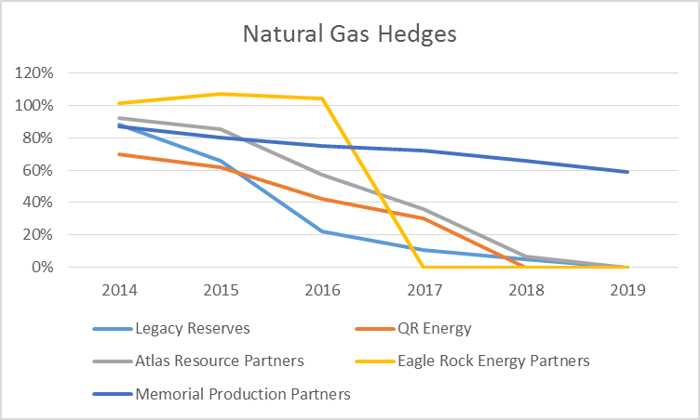 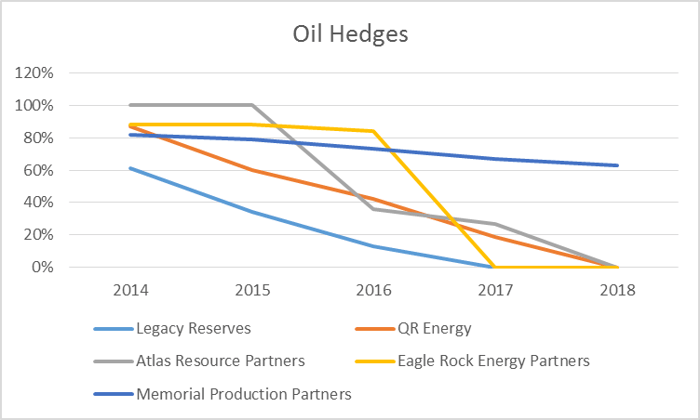 This last chart shows again how conservatively hedged Eagle Rock's oil is relative to its peers. The company's hedges run longer and for a higher duration than most of its peers. This is especially true when looking at oil-rich QR Energy. Falling oil prices could hurt QR Energy in the future as it hedges a much lower percentage of its volume than Eagle Rock.

Investor takeaway
Eagle Rock Energy Partners investors have endured a rocky couple of years. Volatile commodity prices hit the company's midstream business as Eagle Rock didn't have enough fee based revenue locked in to keep its distribution on solid ground. That shouldn't be a problem going forward, as the company's production is pretty well balanced and the cash flow is locked in by a strong hedging portfolio.