Please ensure Javascript is enabled for purposes of website accessibility
Log In Help Join The Motley Fool
Free Article Join Over 1 Million Premium Members And Get More In-Depth Stock Guidance and Research
By Daniel B. Kline – Feb 11, 2014 at 3:26PM

As the most romantic holiday of the year approaches, a new survey shows that your partner might be more willing to part ways with you than with his or her mobile phone.

With Valentine's Day approaching, research conducted by Harris Interactive suggests that you should skip the flowers, candy, and lingerie and get your partner a new smartphone … or, if you can afford it, a car.

The data, as reported by Statista in the infographic below, shows that 26% of Americans said they could not live without their mobile phone while only 20% said they wouldn't survive without sex. The winning entry in the poll was food with 73%, but realistically, that choice violates the spirit of the question as it's a factual answer. Without food for a year, you literally would die, but the same could be said for air or water, which did not make the list.

Still, after discounting the general silliness of the survey, the survey does offer good news for companies selling cars, Internet access, computers, televisions, and mobile phones. 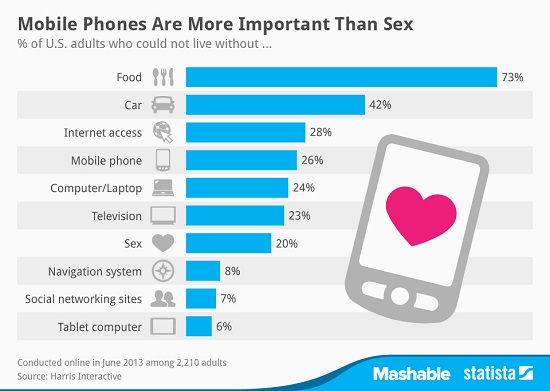 You can't cuddle with your phone

The good news (for the phone industry) may be that people actually are more satisfied with their phones than they have been.

In a May 2013 survey, the American Customer Satisfaction Index found that satisfaction in the wireless phone industry is improving. The index noted that wireless service providers in total landed at 72 (out of a 100-point scale). According to the survey, the wireless phone industry reversed a two-year trend of declining customer satisfaction with a 2.9% gain. Despite matching its 10-year high, wireless service remains well below the national ACSI average.

"Barriers to switching, including contracts with cancellation fees, make the wireless industry less competitive," says ACSI director David VanAmburg. "ACSI research shows that customer satisfaction is almost always lower when consumers have less choice and more headaches when it comes to switching to another seller."

And while marriage is not directly tied to sex, research firm GfK Roper conducted a survey for Divorce360.com, in which 75% of married people said they are happy at least three-quarters of the time (which is the survey's definition of a good marriage). So although around 50% of marriages will end in a divorce, marriage has roughly the same satisfaction rate as mobile phones.

Phones are getting cheaper

There are plenty of obstacles that could prevent an interested party from having sex, but cost is pretty much the only thing that can stop someone who wants a mobile phone from having one. And even that is becoming a lower barrier. AT&T (T 1.01%) slashed its family plan prices in early February, which is likely to lead to its competitors eventually following suit.

The biggest pricing impact in the mobile phone industry is not the big players, but smaller ones looking to force their way into the market. As reported by USA Today, Los Angeles-based FreedomPop — which in October rolled out a low-end smartphone and free basic service for voice, text, and data — has introduced unlimited voice and text plans for $4.58 a month, much less than big boys AT&T, Verizon (VZ 0.26%), Sprint (S), and T-Mobile (TMUS -0.85%) charge.

The FreedomPop plan offers either a Samsung Galaxy SII for $159 or an HTC Evo 4G for $119 with an annual plan that includes unlimited voice and text as well as 500MB of data for $6.67 a month (paid all at once). Pay for two years in advance and the cost drops to $4.58 a month.

And yes, FreedomPop is not, and may never be, well-known, but it's a sign of where the industry is going.

Really want to score? Buy your partner a car

With 42% of people saying they could not live for a year without their car, perhaps the best path to ensuring you won't have to unwillingly give up sex is to buy your partner a car. Consumer Reports, which conducts a yearly survey of owner satisfaction, found that in 2013, owners of the Tesla (TSLA -1.14%) Model S gave it the highest owner-satisfaction score the magazine has seen in years: 99 out of 100.

After all, for some, Valentine's Day is all about scoring.