Education Management flunks out of the market's favor, Overstock.com goes on sale, and ExOne can't print up a better price.

No one wants to own a stock that's falling, but if you invest long enough, it's inevitable -- even the best investors have had their share of stinker stocks. But just because a stock is hurting today doesn't mean it's bound to drag your portfolio down forever. It's important to distinguish between stocks that are on their way to oblivion and those that are simply waiting for the right piece of news to soar again.

Today we'll look at three of the stocks with the worst losses on the market over the past month of trading. They might have just become great investments, but the reasons for their collapse might also have made them too dangerous for your portfolio. We won't know until we dig deeper, so let's get right to it.

Education Management
It's been a wild ride for Education Management shareholders, who started off with a stock worth about $5 last spring and rode it up to more than $16 by late fall, only to watch it crash back toward $5 through the end of the year. The for-profit educator's 45% haircut over the past month is only part of the hideous two-thirds drop its stock has suffered since Halloween: 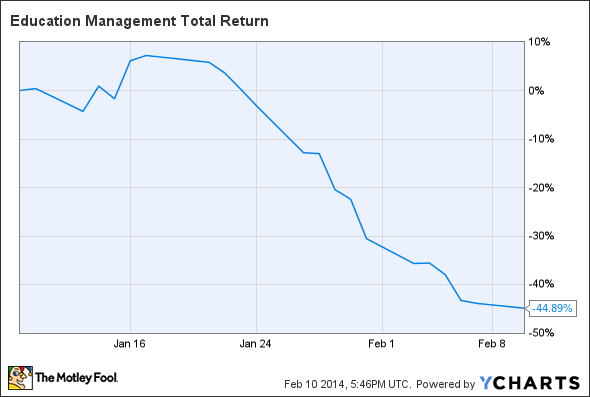 It didn't help that the company issued an ugly slate of forward guidance while simultaneously posting a barely-there profit for its fiscal second quarter on the back of tanking student enrollments. Total enrollment is now 22% below where it was three years ago, but at least the numbers appear to be stabilizing. Will Education Management's smaller student body be enough to support its new share price? That will depend on a few factors, not least of which is an ongoing federal crackdown on for-profit education and its abysmal graduation rates. There might be a bounce in the future, but no one can yet say if it will be durable.

Overstock.com
The market was excited about this discount e-tailer for much of 2013, but investors are over Overstock.com this year after getting sideswiped by weak earnings for the all-important holiday quarter: 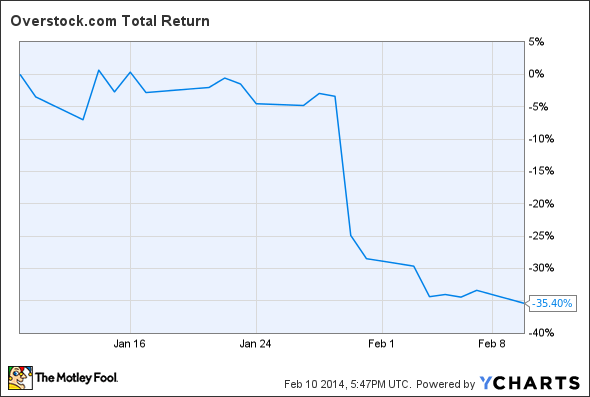 Fool contributor Michael Lewis dissected the company's earnings report, and found that Overstock.com wound up spending far more on sales, marketing, and administrative costs than it had expected after several setbacks on search engines and in courtrooms. He noted that the company's forward P/E of 21 is attractive relative to a certain supersized but barely profitable e-tailer, but it's also worth noting that Overstock's price-to-free-cash-flow ratio is a relatively minuscule 6.9. Will that hold up over the course of 2014, especially considering that an uptick on this metric neatly corresponds with a big one-time bump in net income as a result of a tax credit? Perhaps not -- but it's the one stock on this list that doesn't look to be beset by significant threats before it arrives at real profitability. That makes it worth a second look for bold investors, if for no one else.

ExOne
Tiny 3-D printing company ExOne has enjoyed a bounce over the last couple of days that pushed it down to third place for this month's worst losers. It's hard to keep 3-D printing stocks down, but there's a valid argument that ExOne never should have reached its ridiculous valuation in the first place; the company's price-to-sales ratio is still more than 15 after the drop -- well above average for the tech world. You could blame sector leader 3D Systems (DDD -2.63%) for precipitating the drop with its profit guidance downgrade, but the reality is that ExOne did this to itself when it reduced its revenue guidance for the full year: 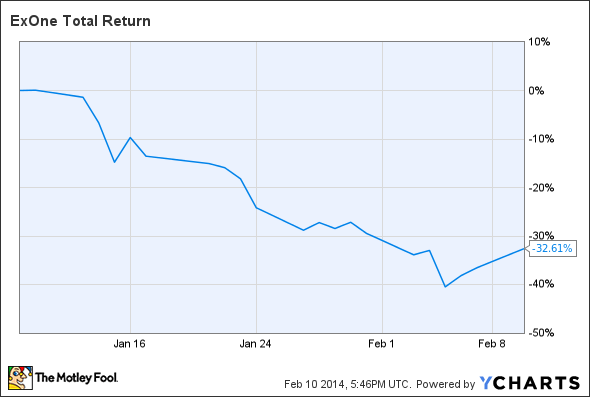 The Motley Fool has been extremely bullish on the entire 3-D printing industry for more than a year, but you can exclude me from that optimism -- I think the sector is inflated by expectations of boundless growth from investors who refuse to consider the possibility of tougher competition. ExOne and the rest of its 3-D printing peers have yet to prove that they won't be left behind by industrial giants with deep pockets as their core technologies lose patent protection.