Please ensure Javascript is enabled for purposes of website accessibility
Log In Help Join The Motley Fool
Free Article Join Over 1 Million Premium Members And Get More In-Depth Stock Guidance and Research
By Brandy Betz – Feb 11, 2014 at 11:30AM

Green Mountain Coffee Roasters has showed its strength in aligning big-name partners -- and SodaStream should worry.

Green Mountain Coffee Roasters (GMCR.DL) and Coca-Cola (KO 0.02%) announced a new partnership on Wednesday that centered around a forthcoming cold-beverage version of the Keurig brewers. The news sent shares of both companies soaring and competitor SodaStream's (SODA) shares on a wild ride. Green Mountain's cold brewer won't come on the market until next year, but the Coca-Cola deal already offers what's most important to Green Mountain: licensing partnerships.

The 10-year deal will make Green Mountain Coffee Roasters the exclusive partner for single-serve cold-beverage products based on Coca-Cola's brands. Those K-Cups of soda will work in the Keurig Cold machines expected to launch next year. To sweeten the deal, Coca-Cola is set to have 10% ownership of Green Mountain through the acquisition of about $1.25 billion in stock, with the deal set to finalize in March.

Coca-Cola has the advantage of getting to the Keurig Cold table first and receiving a nice bit of stock as repayment. Green Mountain's continued ability to woo partners should have SodaStream nervous.

Green Mountain's licensing reliance
Green Mountain Coffee Roasters makes most of its money from the K-Cup pods, not from the actual brewers. In the company's first-quarter report, the packs segment accounted for more than 67% of total revenue after a year-over-year sales growth of 8% compared to a 1% loss for brewers. But Green Mountain has slowly lost market share since its K-Cup patent expired in September 2012. 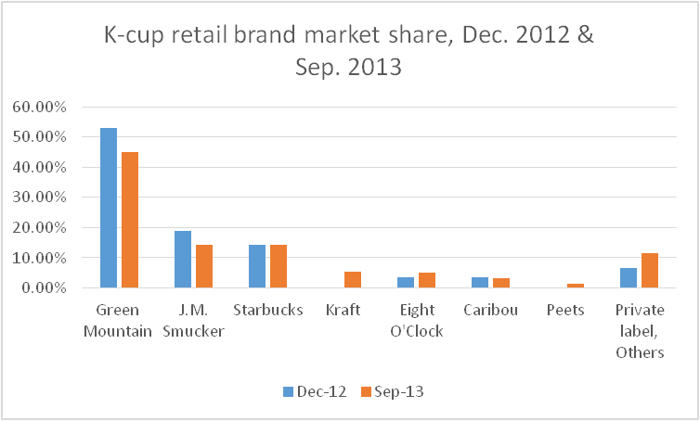 Green Mountain knew that private-label offerings would explode once the K-Cup patent expired. That's why the company has focused on locking in big brand names to long-term, exclusive contracts. As shown in the chart above, Green Mountain has licensing deals with J.M. Smucker, Starbucks, Eight O'Clock, and Caribou. So the company was involved with nearly 80% of the K-cups on the market in September 2013.

The Coke deal is a major way to kick off licensing agreements for the next generation of the Keurig machine, and Green Mountain will surely court other big-name brands in the future. It's a deal that will benefit both sides as well if the Keurig Cold proves a strong seller. But should SodaStream fear the impending competition?

SodaStream slip?
The details of Keurig Cold's construction remain under wraps, but the machine will produce cold beverages with the option of carbonization. This puts the product into competition with SodaStream. SodaStream's most high-profile brand partners include Crystal Light and Kool-Aid; however, the soft drink syrup offerings more closely resemble the off-brands available at the supermarket.

Green Mountain could also best SodaStream in how the Keurig Cold provides the carbonation. SodaStream uses proprietary carbon dioxide canisters that will carbonate about 60 liters. Customers then need to purchase a refill canister for around $15. If Green Mountain was able to cheapen the process, the Keurig Cold could appeal to more budget-conscious consumers.

Foolish final thoughts
Details on the Keurig Cold will start trickling out as launch time approaches, but Green Mountain has once again showed its strength in aligning the biggest players in the beverage business. SodaStream has every reason to worry.