A 25-year old eBay employee was at the heart of eBay's rebound. Here's his story and where eBay is headed from here.

It's no secret that eBay (EBAY -1.68%) has struggled during the past decade to fend off competition from e-commerce rival Amazon (AMZN -1.78%). While Amazon was developing new and inventive ways of attracting more shoppers to its site, eBay was resting on its laurels. Unlike Amazon, eBay lacked complex search technology, which ultimately made it more difficult for users to find and purchase products on eBay.com.

The online marketplace's stock suffered as a result. As you can see from the chart below, eBay's share price inched along over the past decade, while Amazon's continued to climb higher. 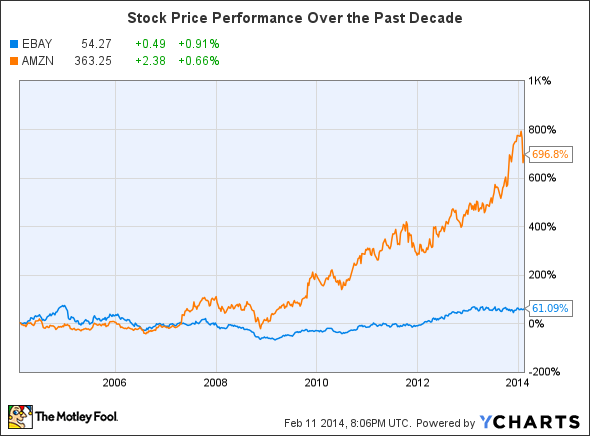 Nevertheless, eBay is finding new life in the global e-commerce space thanks, at least in part, to one guy: Jack Abraham.

Meet eBay's kid innovator
Okay, he's not an adolescent. However, he's also not a 50-something eBay-lifer either. Meet Abraham, the 27 -year old mastermind behind eBay Now, a service that lets eBay customers find local products from nearby brick-and-mortar retailers and have them delivered in about an hour. The e-commerce giant currently offers the service in Chicago, Dallas, New York City and Brooklyn, NYC Queens, and San Francisco.

eBay acquired Abraham's start-up, Milo, for $75 million in 2010. At the time, Milo was a website that featured real-time product inventory for more than 50,000 U.S. retailers. After being purchased by eBay, Abraham was brought on board to integrate Milo's technology. Today, eBay Now is a critical piece of the company's competitive strategy to beat Amazon at its own game.

You see, Amazon has been testing same-day shipping in select cities around the country for some time now. However, as eBay rolls out its eBay Now product in more areas in the year ahead, it could give the global commerce company a key advantage over its rival. However, that's only the start of it.

Team Six
After being summoned by eBay's CEO John Donahoe for a special meeting on innovation, Abraham found himself frantically organizing a top secret team that would bring his big idea to life. During the meeting, Abraham proposed creating a special feed, similar to Facebook's News Feed, which would show eBay users new products for sale from retailers and brands that they follow, according to Business Insider. Donahoe loved the idea. He told Abraham to develop it further and eBay would support him with whatever resources he needed as long as he kept the project a secret.

Abraham didn't waste any time. Astonishingly, he was able to circumvent the corporate politics and bureaucracy that often comes with a company of eBay's size. He quickly put together a team of six people and flew everyone to Australia the next day to begin working on a prototype. Why Australia? He felt the team would work faster and more privately at a far away locale.

As for the group, they decided to call themselves Team Six.

Making eBay history
Two weeks in Australia in 2012 turned out to be just what the doctor ordered. In a meeting with eBay's CEO John Donahoe following Team Six's return, Mr. Donahoe laughed and said to Abraham, "Jack, I think this could be the future of eBay," according  to Business Insider. He was right.

Today, Abraham's feed is the focal point of eBay.com. In fact, since its launch last year eBay's homepage has boosted sales and increased user engagement, according to Business  Insider. On top of this, it also taught Donahoe a valuable lesson about the importance of innovation. Abraham doesn't work at eBay anymore, because he left to pursue his other ideas. However, Donahoe hasn't been shy about appointing forward thinking start-up-types to top executive positions.

Andy Palmer, for example, was one of the people on Team Six and today he's the director of product management for eBay's homepage. For the record, he too is still in his twenties. Looking ahead, one of the ways eBay will continue to innovate is by acquiring fresh start-ups and bringing their founders onboard. Donahoe is also innovating the way eBay works with retailers.

Big box retailers including Target (TGT -1.80%), Home Depot, and Macy's, all have stores on eBay.com today. This positions eBay as a "technology partner" to retailers, according to Donahoe . As you can see from the screen shot above, Target even runs ads on eBay's homepage. This type of collaboration has helped transform eBay from an online auction site to a full blown shopping site where customers can find the latest deals on their favorite designers.

The bottom line is this: Without innovation technology companies, such as eBay and Amazon, would die . Fortunately, eBay finally seems to be evolving, which should help it better compete against rivals in the future.

1 Year After Its IPO, Duolingo Is Proving the Bears Wrong