Please ensure Javascript is enabled for purposes of website accessibility
Log In Help Join The Motley Fool
Free Article Join Over 1 Million Premium Members And Get More In-Depth Stock Guidance and Research
By Ashraf Eassa – Feb 11, 2014 at 10:00AM

With Mobile World Congress coming on up, Intel gets another chance at bat.

One of this Fool's biggest criticisms of Intel's (INTC -1.11%) smartphone strategy has been the company's inability to get competitive parts to market in a timely fashion. There's always been a problem, whether it's an issue with the actual system-on-chip or with the modem -- Intel was very late with its LTE modem -- and it has limited the company's traction in smartphones in a big way. At the upcoming Mobile World Congress, the company has an opportunity to prove that its smartphone efforts aren't a complete failure.

Merrifield wasn't designed for large phones
It's clear that Intel was very much aping Apple (AAPL -1.96%) with its next-generation Merrifield smartphone product. The design is a dual-core, likely with the same GPU block from Imagination Technologies (NASDAQOTH: IGNMF) that Apple is using in its A7 chip, although probably clocked higher. These all point to Intel trying to do a chip very much in the spirit of what Apple did with A7. Unfortunately, Intel is very much shooting behind the duck here, as the world moved on to larger phablets that support higher-power envelopes and larger die sizes.

That said, there's a true litmus test
Even in a world where phablets are the norm -- and it's likely that even Apple will move to large-screen phones this year -- there is still a market for small smartphones. In fact, the market is large enough that Apple still smashes records with its iPhone sales, Samsung (NASDAQOTH: SSNLF) dutifully rolls out "Mini" editions of its Galaxy S flagships, and many others still supply 4-inch-class phones. It is these phones that Intel will likely be targeting with its Merrifield platform. 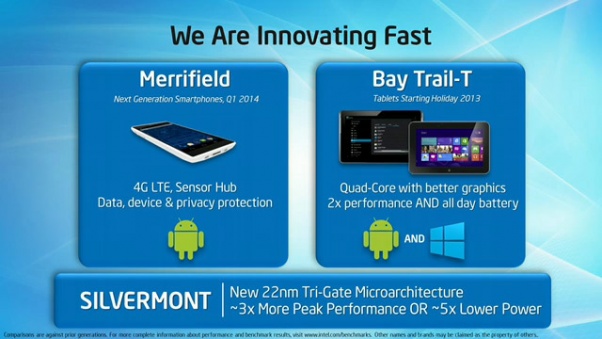 If Merrifield is successful, then investors should see Samsung, HTC, LG, or Motorola announcing a higher-end, but smaller device with the chip. That means unless Intel is able to show a real design win with one of these major players -- and not third-tier designs such as the Safaricom Yolo and the Xolo -- the platform will join Medfield and Clover Trail+, the two previous smartphone platforms from Intel, in the failed-design graveyard. So, keep an eye out at Mobile World Congress.

Foolish bottom line
At the end of the day, tablets will end up simply compensating for the decline in PCs, while smartphones represent the real opportunity for growth. The total addressable market is very large -- about 1 billion smartphones were sold in 2013 -- and the opportunity to drive incremental silicon value via tighter integration is very real.

With a modem, connectivity, and other goodies integrated on-board, the chip vendors can capture more value per chip sold and, thanks to a very high unit-volume market, there's a lot of revenue to be had for the companies that can afford it. Can Intel capitalize on this opportunity? In theory, the answer should be a resounding "yes," but we'll see just how far it got this year at Mobile World Congress.