Please ensure Javascript is enabled for purposes of website accessibility
Log In Help Join The Motley Fool
Free Article Join Over 1 Million Premium Members And Get More In-Depth Stock Guidance and Research
By Lee Samaha - Feb 11, 2014 at 7:35AM

Johnson Controls has good exposure to the automotive and commercial construction markets. Both these sectors are likely to outperform if the global economy improves as expected.

Most of the companies reporting in the industrial sector have seen a similar kind of narrative around their recent results. The general story is of some softness caused by a weather-affected fourth quarter, but the underlying conditions are seen as positive. Paradoxically, automotive and building products supplier Johnson Controls (JCI -1.30%) disappointed the market, because the bad weather was expected to boost its results more than it did!

Johnson Controls, but can't control the weather
There wasn't a lot wrong with Johnson's latest results, but the market sold off its shares nonetheless. One of the market's issues seems to be that its power solutions segment results were not as strong as expected. Although, the segment is called power solutions, its end market exposure is actually to the automotive market. For example, the segment generated 75% of its unit sales to the automotive replacement market in 2013, with the other 25% going to original equipment manufacturers, or OEMs.

A quick look at Johnson's 2013 segmental sales and income reveals that power solutions is its highest-margin segment. 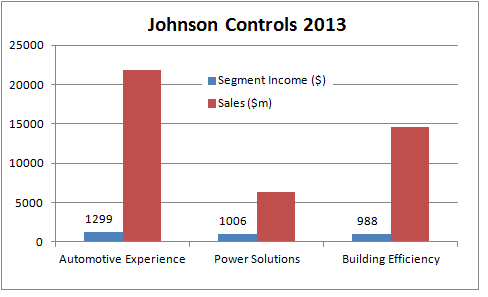 Moreover, given the extremely cold weather in the States, investors were entitled to expect a strong set of results in the first quarter. Indeed, auto-parts retailer O'Reilly Automotive (ORLY 0.35%) (a Johnson customer) reported that its comparable same store sales growth came in at 5.4% in its fourth quarter; a figure above its guidance of 3%-5% growth.

In actuality, Johnson did report good numbers, but the power solutions segment may have disappointed for a few reasons:

Looking ahead, it's reasonable to expect the December trends to continue, especially if O'Reilly Automotive's guidance is a good indicator. O'Reilly's forecast for comparable same store sales growth for the first quarter is for a healthy looking 4%-6% increase.

Building efficiency and automotive experience
Johnson's fortunes in 2014 will be guided by the outlook for automobiles (production and aftermarket) and construction markets. A look at first-quarter income by segment demonstrates some varied performance in its segments.

After adjusting for divestitures and foreign exchange affects, sales in the building efficiency segment were down 2%. There is no doubt that the commercial construction market in the U.S. was weak in 2013, but Johnson's residential and light commercial business grew 11% in the quarter. North America systems and service only contributed 30% of building efficiency sales in 2013, but it was responsible for more than 51% of the segments income. In other words, North America matters.

Johnson's management was cautiously optimistic on the outlook for the North American heating, ventilation and air conditioning, or HVAC, market in 2014. This is pretty much what competitors in the HVAC space, like Lennox International (LII 0.68%), also said recently. In its recent conference call, Lennox's management predicted that North American HVAC residential shipments would be up mid-single digits, while shipments in the commercial HVAC market are only expected to be up low-single digits.

Frankly, it looks like Lennox and Johnson are giving moderate commercial HVAC outlooks, because current conditions are not strong. However, if the residential market continues to improve then the pressure for more commercial construction to be built up around the new housing will only increase.

Turning to the automotive experience segment, Johnson is seeing the benefits of strong global automobile production and its favorable positioning within the marketplace. Indeed, its North American revenue was up 11% versus an industry production increase of 5%, while European revenue was up 9% versus 2% for the industry. Essentially, Johnson finds itself exposed to the car manufacturers that are gaining share. Going forward, China will be crucial to the segment's prospects. China sales grew 33% in the last quarter and made up $1.9 billion of the segments total of $5.8 billion. China's economic prospects are uncertain in 2014, but current conditions are favorable in the auto industry. 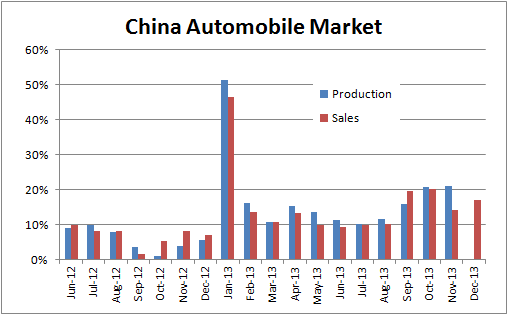 The bottom line
Johnson looks well placed to perform well if the global economy improves as expected in 2014. On the positive side, the company's exposure to ongoing strength in automobile production and upside from a possible improvement in commercial construction make it attractive. On a more negative note, cyclical exposure also brings cyclical risk, and Johnson needs to improve its cash flow generation.

Management forecasts around $1.6 billion in free cash flow for 2014, and this would represent around 4.4% of its current enterprise value. As attractive as the company is, it's hard to argue that the stock is a great value, unless you are convinced that its end markets will strengthen in 2014.

Lee Samaha owns shares of Lennox International. The Motley Fool owns shares of O'Reilly Automotive. Try any of our Foolish newsletter services free for 30 days. We Fools may not all hold the same opinions, but we all believe that considering a diverse range of insights makes us better investors. The Motley Fool has a disclosure policy.

Down Between 9% and 42%: 3 Top Dividend Stocks That Are Too Cheap to Ignore