‘Lightning Returns: Final Fantasy XIII’ is a polarizing title that shows how much Square Enix’s flagship Final Fantasy franchise has changed over the past 27 years. Will this over-expansion of the franchise cause the series to implode?

As a bizarre bonus, Square Enix is also offering a Lara Croft costume for Lightning as a bonus DLC for both Xbox 360 and PS3 gamers:

I'll be blunt with my opinion of Lightning Returns -- Square Enix needs to seriously slow down before it obliterates its beloved 27-year-old franchise.

To understand what's wrong with Square Enix's current approach to Final Fantasy, we need to take a look back at the origin of the series.

Where it all went wrong...
The original Final Fantasy for the 8-bit Nintendo (NTDOY) Entertainment System was so named because it was considered Square's last-ditch effort at making a dent in the video game industry.

It was a surprise hit, thanks to its slick marriage of Western and Japanese role-playing game ideas of the late 1980s. The franchise matured by Final Fantasy IV (1991), which was released as Final Fantasy II for the 16-bit Super NES in the United States. Final Fantasy IV's storyline was notably much more linear than its predecessors.

However, Final Fantasy became a true video game blockbuster with Final Fantasy VII (1997) for the original Playstation, one of the most expensive games ever produced at the time with a whopping production budget of $45 million ($64 million adjusted for inflation).

The reason for that massive budget was the extensive use of CGI in the game's cutscenes and backgrounds. Although those flashy cutscenes possibly helped Square sell 9.7 million copies of the game for the Playstation, Square got the wrong idea -- it thought that CGI was the key to the future of Final Fantasy.

An obsession with CGI leads to more linear storylines
This all culminated in Final Fantasy X (2001, PS2), which was arguably a single long corridor in which the player walked forward, loosely participated in battles, and watched very long cutscenes.

The player no longer had any real control over the "role playing" experience -- he or she was simply forced to watch a movie while occasionally pushing a button to advance.

In fact, Square and Sony were so obsessed with the idea of CGI films that they released Final Fantasy: The Spirits Within in 2001, a box office bomb that only grossed $85 million on a production budget of $137 million.

In 2003, Electronic Arts (EA -1.11%)/Bioware's Star Wars: The Knights of the Old Republic redefined what Western gamers expected from console RPGs -- the freedom of choice, multiple endings, and better overall replay value. Bioware's Mass Effect (2007) and Dragon Age (2009), along with ZeniMax/Bethesda's The Elder Scrolls and Fallout 3 (2008) widened that gap further.

That gap resulted in the steady loss of Western gamers during the fifth console generation (VII-IX) but the franchise regained some Western gamers after Final Fantasy XIII became the first single-player title in the series to hit the Xbox 360.

However, no title after Final Fantasy VII has ever matched the 1997 hit's sales:

One of the new company's first releases, Final Fantasy XI (2003), represented a new step for the series -- for the first time, it became an MMO (massively multiplayer online) RPG. The reason was obvious -- MMOs, with their monthly fees, were more profitable than single-player games.

That same year, Square broke the unwritten rule that each Final Fantasy title was a self-contained tale.

It started to make sequels and spin-offs to several of its popular titles, and the results were all over the map. Here's a partial list, excluding Japan-only mobile titles and remakes of earlier games:

While none of these games were total failures, the existence of so many main series sequels, spin-offs, and remakes was a radical departure from the straight path that the series had taken from Final Fantasy I to Final Fantasy X. 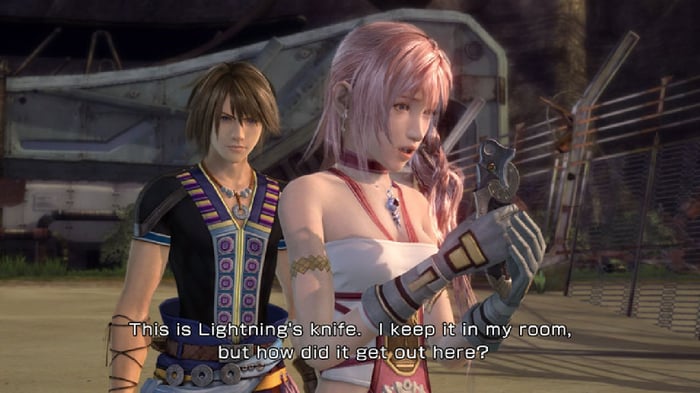 Simply put, these extra games cheapen the series and confuse gamers. It's the exact same doomed path that Capcom (NASDAQOTH: CCOEF) took its Rockman/Megaman franchise -- it grew from a straight numbered series into an expanded universe of games like Megaman Legends and Megaman Battle Network, until it all became so cluttered and confusing that Capcom nearly "killed off" the character in 2011.

Over the past decade, Square Enix's Japanese shares have fallen more than 14%. Last May, president Yoichi Wada, who had led the company since the original merger, resigned after the company slashed its full year net profit forecast from ¥3.5 billion ($34 million) to a loss of ¥13 billion ($127 million).

To understand just how far Final Fantasy drifted from its sci-fi RPG roots under Wada's watch, take a look at this moment of absurdity from the introduction of Final Fantasy X-2:

Although Square Enix does not report sales of its individual franchises, we can estimate that the 10.3 million copies of Final Fantasy XIII and XIII-2 sold (as reported by the industry) generated roughly $515 million to $618 million (based on a retail price of $50 to $60) in overall revenues between 2009 and 2011.

Square Enix reported sales of ¥147.98 billion ($1.45 billion) in fiscal 2013, which means that Final Fantasy titles still account for a significant percentage of its top line.

Therefore, fans of Final Fantasy and Square Enix investors should hope that the company's new CEO, Yosuke Matsuda, takes better care of the company's top-selling franchise than his predecessor did.

The bottom line
Of course, that's not to say that there isn't a market for Lightning Returns or any of the upcoming Final Fantasy spin-offs. Just as The Elder Scrolls is a distinctly Western RPG, Final Fantasy is still the yardstick by which all other Japanese RPGs are measured.

However, Square Enix's obsession with expanding old and new titles, and especially its illogical love of Lightning, could burn out the beloved franchise. As much as people criticize Activision Blizzard's (NASDAQ: ATVI) dilution of Call of Duty, Square Enix has followed the exact same path.

Final Fantasy, in my opinion, needs a franchise-refreshing reboot that takes the game back to its roots, similar to what Konami (NYSE: KNM) did to its cluttered Castlevania universe with the critically acclaimed Lords of Shadow in 2010.

What do you think, fellow gamers? Is the current trajectory of Final Fantasy titles sustainable, or is it doomed to burn gamers out? Please share your thoughts in the comments section below!