Republic Airways Holdings Inc. stock fell as much as 10% on Tuesday, after investors panicked about an update to the company's guidance.

Many Republic Airways Holdings Inc. (NASDAQ: RJET) shareholders were spooked by an investor update the company issued on Tuesday morning. Republic announced that it will remove 27 small regional jets from its fleet this year, which will reduce pre-tax income by $18 million-$22 million. This news helped send the stock down as much as 10% to a new 52-week low. 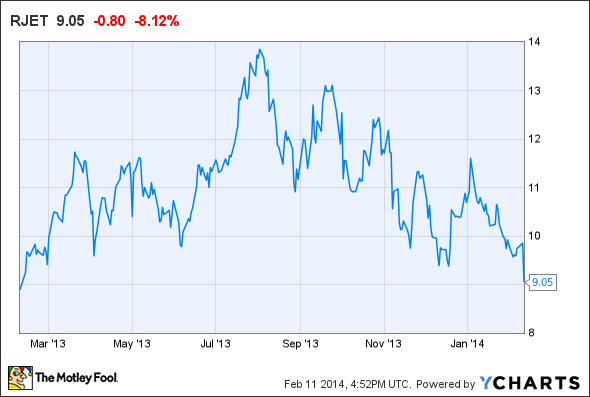 For long-term investors, this is much ado about nothing. The combination of high oil prices and more rigorous FAA rules for pilot training and rest are making small regional jets obsolete. However, Republic is actually very well positioned among the regional airlines as small regional jets represents a small fraction of its total capacity.

The pilot crunch
For several years, regional airlines like Republic and SkyWest (SKYW 0.11%) have been dealing with weak demand for small regional jets (those with 50 or fewer seats). In the last few years, Republic restructured its 50-seat jet subsidiary, Chautauqua Airlines in order to get it back to breakeven.

SkyWest has had similar trouble with its ExpressJet subsidiary, which is heavily weighted toward small regional jet flights. A few months ago, SkyWest President Brad Rich stated that ExpressJet was still losing money and would probably lose money again in 2014.

All in all, the long-term outlook for small regional jets is dim. Delta Air Lines (DAL 1.13%) has moved aggressively to get rid of most of its 50 seat jet fleet. United Continental (UAL 0.28%) and American Airlines (AAL 0.56%) are following in Delta's footsteps, albeit at a slower pace.

However, the small regional jet crisis was exacerbated by the implementation of new FAA pilot rules last month. The new rules require more rest for pilots, which in some cases has forced airlines to hire additional pilots just to maintain their schedules. Moreover, the rules now require 1,500 hours of flight experience for commercial airline co-pilots, up from just 250 hours previously.

This has created a "pilot crunch". Larger carriers are hiring pilots away from regional airlines, which have much lower pay standards. Meanwhile, regional airlines have a much smaller pool of potential new pilots to choose from. This problem was one of the factors that caused United to shutter its Cleveland hub on relatively short notice.

Republic's fleet plan change in context
At its annual meeting last September, Republic Airways noted that it had contracts for 41 small regional jets expiring in 2014. At the time, the company expected to negotiate short-term extensions to keep all of those planes flying. Even with those planes remaining in service, small regional jets would have represented just 14% of Republic's capacity this year, down from 17% of its 2013 capacity.

By the time of Republic's Q3 conference call in November, CEO Bryan Bedford was backing away from the original fleet plan guidance. He warned investors that Republic might need to cut back on flying small regional jets in order to economize on pilot labor, as it is in the midst of rapidly expanding its fleet of more profitable 76-seat jets.

As noted above, this will reduce pre-tax income by $18 million-$22 million. This is not because the small regional jet operations were profitable, though; it more likely reflects the cost of aircraft rent or depreciation for planes that will now be grounded.

However, this cost will be offset by the growth of Republic's more profitable large regional jet operations. In Q3 -- the most recently reported quarter -- Republic earned pre-tax income of $26.6 million, excluding special items, on revenue of $338.6 million. That represents a pre-tax margin of 7.9%.

Republic's large regional jet operations will expand significantly this year due to the phase-in of a big contract with American Airlines. By the end of Q3 2014, Republic will operate 159 large regional jets, representing more than 20% year-over-year growth in the company's most profitable flying. This should fully offset the $18 million-$22 million cost of grounding more small regional jets.

The long-term picture
Republic Airways still looks like a good long-term investment, as it now trades for less than eight times earnings. Republic's small regional jets are nearly 12 years old on average, which means that most of them will come off lease or become fully depreciated soon. Even before then, Republic may be able to sell or sublease some of these planes to mitigate its losses.

In fact, Republic should come out of 2014 with profit roughly stable year over year and even less exposure to the rapidly declining 50-seat-jet market. SkyWest and other regional airlines that have higher relative exposure to small regional jets have far more to lose.

Adam Levine-Weinberg owns shares of Republic Airways Holdings. Adam Levine-Weinberg is short shares of United Continental Holdings. The Motley Fool has no position in any of the stocks mentioned. We Fools may not all hold the same opinions, but we all believe that considering a diverse range of insights makes us better investors. The Motley Fool has a disclosure policy.