Annaly Capital Management will reveal its quarterly and year-end results on February 25. Here's what I'm watching.

One of the most popular high-yielding stocks in the market, Annaly Capital Management (NLY -2.43%) recently announced it will reveal its fourth quarter and year-end results for 2013 after the market closes on February 25. To say this announcement will be closely watched by Annaly's shareholders is an understatement.

After profits (and dividends) eroded for much of the past year, shareholders will be looking for any sign of a turnaround, or at least signs of stability.

Janet Yellen and her team at the Fed have an exit plan.

It isn't all bad, however. The unstable and spiky interest rates that caused Annaly's profits to erode this year seem to be stabilizing. Annaly's management decided to use less leverage in order to ride out the volatility and to have more buying power to take advantage of opportunity once the dust settles.

Now that the Federal Reserve has provided some clarity on where its monetary policy is heading, the company should have more actionable opportunities for profit in the near future.

Another interesting occurrence since the share price has dropped is the flurry of insider buying that has taken place. In fact, since August, there have been nine separate insider purchase transactions of up to $3 million each and absolutely no insider selling. This tells me management is so optimistic things will turn around, they're willing to put more of their own money in.

What analysts are expecting
The consensus of analysts expects Annaly to report $1.12 in earnings for 2013, with $0.27 coming from the fourth quarter. However, more interesting is the range of estimates. Of the nine analysts who cover the company, estimates for this past quarter range from $0.16 to $0.36. This uncertainty is part of the reason that Annaly trades for just about 85% of its book value.

What I'm expecting
It would be foolish (and not in a good way) to try to predict what Annaly's fourth-quarter results are going to look like. What's more important is for Annaly to shed some more light on its future plans, particularly its strategy to turn things around in 2014. The consensus is calling for $0.28 per share for the next two quarters, which could on the low side, as it takes into account interest rate instability and Annaly's currently low usage of leverage.

Use the 12% rule
When trying to get a read on what may happen with Annaly, it is helpful to consider what I call the "12% rule." Annaly's share price generally gravitates so that the dividend payments produce a 12% annual yield. 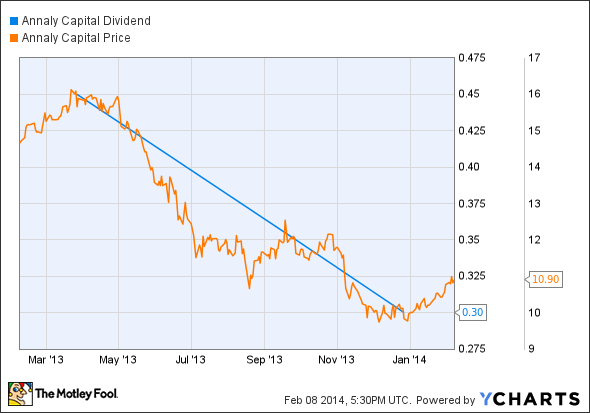 Looking ahead
At the company's current stock price of right around $11, it appears that the market is torn between an expectation of a $0.30 or $0.35 dividend payment going forward. Once clarity on the company's profits and future expectations is given, shares should gravitate toward either the $10 or $11.67 price points.

4 High-Yield Dividend Stocks to Stay Away From
376%