It’s been a brutal 12 months for Arena and VIVUS, which respectively sell the obesity drugs Belviq and Qsymia. Can these two beaten-down stocks bounce back in 2014?

Here's some good news -- America isn't the most obese nation in the world. The bad news is that America still ranks second behind Mexico, according to a United Nations report last July. About 31.8% of American adults are still classified as obese, compared to 32.8% in Mexico.

At first glance, those ominous numbers hint at a blockbuster market for a new generation of obesity drugs, such as Arena's (ARNA) Belviq and VIVUS' (VVUS) Qsymia, the first new obesity drugs approved by the FDA in 13 years.

The FDA has been wary of obesity drugs since the Fen-Phen (fenfluramine/phentermine) disaster in the 1990s, when fenfluramine, an appetite suppressor, was implicated in heart valve disease, pulmonary hypertension, and cardiac fibrosis. Fenfluramine was withdrawn from the U.S. market in 1997.

Lackluster or blockbuster?
How well did Belviq and Qsymia actually fare? This chart is worth a thousand words: 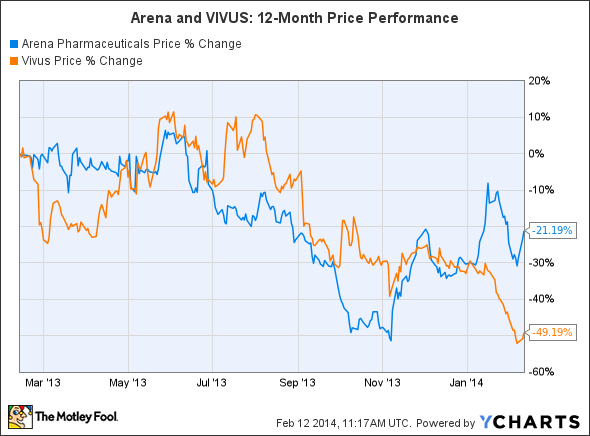 Although Arena (ARNA) has held up better than VIVUS (VVUS) over the past 12 months, sales for both drugs simply weren't that impressive:

Arena (ARNA) and VIVUS (VVUS) bulls share a similar thesis -- sales will eventually pick up thanks to free samples, positive word-of-mouth among physicians and patients, and stronger distribution partnerships with insurers and pharmacy benefits managers (PBMs).

The bears believe that analysts overestimated the demand for obesity drugs, and bad memories of Fen-Phen will keep doctors and patients away from the drug. Moreover, VIVUS' (VVUS) well-publicized management problems -- swapping three CEOs in three months, the resignation of company President Peter Tam, and a proxy battle against a majority shareholder -- all severely undermined investor confidence.

The biggest problem that both drugs face is trust. If Arena (ARNA) and VIVUS (VVUS)  fail to convince doctors, patients, and insurers of the safety of Belviq and Qsymia, Wall Street's peak sales estimates could soon be revised downwards.

On January 14, VIVUS (VVUS) announced a new partnership with health care insurer Aetna. The partnership will integrate VIVUS' (VVUS) Qsymia into a pilot program to evaluate the benefits of prescription medication in weight loss. Aetna's program will be offered to self-insured plan sponsors, and participants will receive a membership to Aetna and CarePass' Lose It! weight loss assistance mobile app. This is VIVUS' (VVUS) second attempt at reaching mobile users, following the launch of its mobile fitness app in March 2013 which doubled as an advertisement for Qsymia.

On February 10, Arena (ARNA) and Eisai (ESALY -1.00%) announced a new agreement with PBM CVS Caremark (CVS 0.92%), which the companies claim could help Belviq reach over half of all Americans. CVS (CVS 0.92%) is the second-largest PBM in America after Express Scripts, and the second-largest retail pharmacy chain after Walgreens.

Shares of Arena (ARNA) jumped more than 7% after the announcement. However, the impact of the CVS Caremark (CVS 0.92%) deal could be overrated, considering that VIVUS (VVUS) also holds similar agreements with Express Scripts and its subsidiary Medco Health Solutions.

Why Arena could be a better longshot than VIVUS
Here are two more realistic positive catalysts for Arena (ARNA) instead -- the eventual approval of Bel-Phen (a combination of Belviq and phentermine), stronger promotional efforts from Eisai (ESALY -1.00%), better insurance coverage, and its approval in additional countries.

Although Bel-Phen sounds uncomfortably similar to Fen-Phen, the FDA considers phentermine (also an appetite suppressant) safe. Eisai will conduct a 12-week study of Bel-Pen throughout the year, with results expected by the fourth fiscal quarter of 2014.

Meanwhile, Eisai (ESALY -1.00%) has doubled its global Belviq sales force to 400. Arena (ARNA) expects insurance coverage to expand from 40% of cost to 50% by next month, resulting in cheaper prescriptions. Eisai (NASDAQOTH: ELASY) has also submitted the drug for approval in Brazil and Taiwan.

While these catalysts won't make Belviq a guaranteed blockbuster, Arena (ARNA) is definitely on more solid ground than VIVUS (VVUS), which lacks a large pharma marketing partner like Eisai (ESALY -1.00%).

The brutal fundamentals
Although Arena and VIVUS are both unprofitable, speculative stocks, we should still compare their fundamental health.

VIVUS (VVUS) appears to be a fundamentally cheaper stock, primarily due to its steeper price decline, but Arena (ARNA) is on much firmer fundamental ground -- it has a much lower debt-to-equity ratio and a positive operating cash flow.

The Foolish takeaway
In closing, both Arena (ARNA) and VIVUS (VVUS) remain risky bets for 2014, but Arena (ARNA) remains a better choice than its conflict-ridden, financially unstable rival. Arena's (ARNA) new partnership with CVS (CVS 0.92%), stronger marketing efforts, and possible new approvals for additional indications and countries could all help the company recover this year.

Leo Sun has no position in any stocks mentioned. The Motley Fool recommends and owns shares of Express Scripts. We Fools may not all hold the same opinions, but we all believe that considering a diverse range of insights makes us better investors. The Motley Fool has a disclosure policy.