iWatch speculation is rampant. With Apple (AAPL -2.54%) CEO Tim Cook promising on multiple occasions that Apple will be launching products in new categories this year, the activity in the Apple rumor mill suggests that the rumored iWatch will likely be one of these new categories. But how big is the market for wrist wearables?

Apple's iPod nano was the first Apple device that could be worn as a watch.

Rapid growth, but not rapid enough
Estimates peg 2013's shipments of smartwatches at about 500,000 units. That number is a rounding error when compared to an estimated 1 billion smartphones shipped worldwide in 2013. But the "smart band" category is about to get a significant boost, according to a new study from Canalys. The trajectory, Canalys estimates, may look something like this. 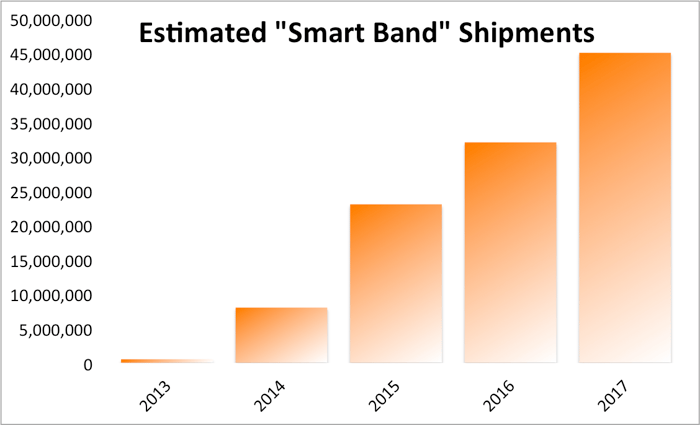 Only 2014, 2015, and 2017 figures in the above chart were estimates by Canalys. 2013's estimates were based on estimates of the year's smartwatch shipments from various sources. The 2016 estimate was derived as a reasonable figure to come between 2015 and 2017.

While the trajectory looks nice, it's really nothing to get Apple investors excited. In fiscal 2013, Apple sold 150 million iPhones. Eight million smart band global units in 2014 and then 23 million in 2015 for all manufacturers combined would be a major disappointment for Apple investors if Apple does launch an iWatch in 2014. Every new major category that Apple entered since the Mac, including the iPod, iPhone, and finally the iPad, has driven record adoption rates. Global adoption of this magnitude would make it impossible for the iWatch to see more rapid adoption than the iPad.

The estimate, Canalys says, includes the assumption that Apple and Google (GOOGL -2.51%) both launch smartwatches this year. Even more, it assumes Samsung launches a successor to its first Galaxy Gear smartwatch and that other Chinese players enter the market, too.

Canalys, apparently, isn't as bullish as Morgan Stanley's Katy Huberty. Huberty predicts that if the iWatch is not supply constrained Apple could sell 58.5 million iWatch devices in its first year of availability. With an average selling price of $299, that's $17.5 billion. That figure would outperform Apple's first-year iPad figures of $12 billion, helping Apple keep its excellent track record of new product categories intact.

Is Canalys underestimating Apple?
It wouldn't be the first time research firms like Canalys have underestimated Apple's potential in a new category. Pre iPad launch estimates were laughably low compared to Apple's actual first-year sales. Apple expert Horace Dediu outlines the problem with estimating the potential of a new category from the Cupertino-based company:

The speed with which products are introduced and scaled is phenomenal so it is more important than ever to see beyond the trajectory of existing products into the pattern of the introduction of new product categories.

In this regard markets are a reflection of common sense rather than uncommon wisdom.

Apple CEO Tim Cook seems to believe there is potential in the category. At All Things Digital's D11 conference in May 2013, Cook said he saw the wearables category as "a very key branch of the tree." In reference to wearables, he said that he thinks "the wrist is interesting. The wrist is natural." But he argued that the category needed some disruption: "There are a lot of problems to solve in this space. ... It's ripe for exploration." Perhaps if Apple is launching the iWatch it will be disruptive enough to give Canalys' estimates a boost? Or does the iWatch promise very little upside to investors as Canalys seems to predict?