Apple isn't priced as if its business is sustainable. But what if the market is wrong? What if Apple possesses a monstrous economic moat?

Apple's (AAPL 0.11%) gross profit margins have been a hot topic during the last several years. Like a rollercoaster, they soared to levels unheard of in electronics hardware, and then plummeted downward. What's most surprising, however, is the level at which they have stabilized. It only takes two charts to illustrate Apple's intriguing gross profit margin story.

The first chart is the rise, fall, and then stabilization of Apple's gross profit margins. 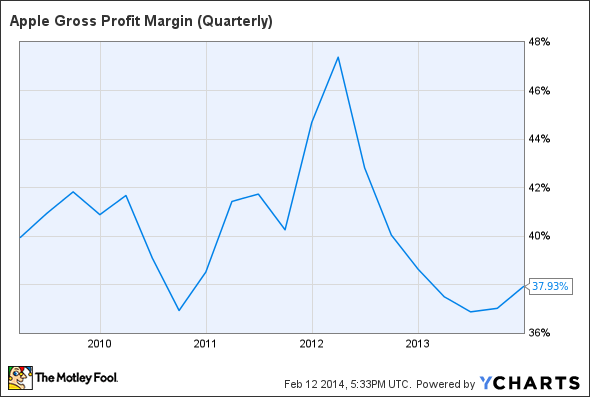 The entire ride has been emotional. The levels Apple reached when its gross profit margin was at its best were surreal. The decline was sudden. And now, the stabilization is happening at astonishingly high levels. 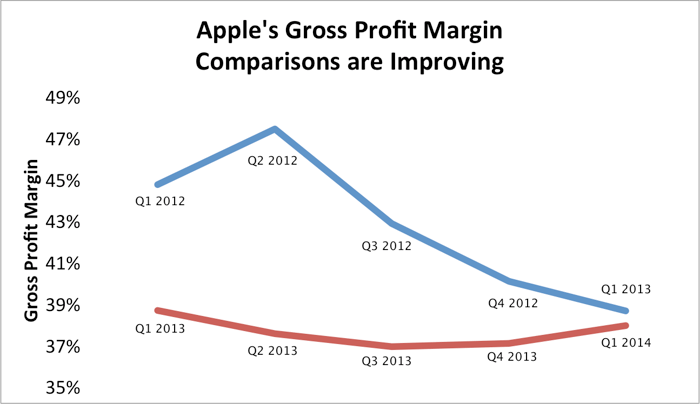 How can Apple stabilize gross profit margins at these remarkable levels?

The facile explanation fails to do Apple justice
Basic business school concepts would suggest that Apple's monstrous gross profit margins around 38% are not sustainable. The rationale goes like this: In a market economy, competitors will vie for Apple's hefty profit margins until they finally get a slice of the scrumptious pie.

To the credit of basic business school concepts, however, professors would be quick to argue that a competitive advantage may do the trick in keeping competitors at bay. Warren Buffett refers to this concept as an economic moat. Imagine a moat around a castle -- the wider and deeper the moat, the better. Common sources of moats include network effects, intangible assets, cost advantages, switching costs, and efficient scale. While Apple certainly possesses advantages from several of these camps, its greatest advantage isn't articulated so simply.

Apple's greatest advantage is found at the overlap of its hardware, software, services, and networks. Its greatest advantage is found in Apple's "inter-dependent network of assets," as Asymco's Horace Dediu has said. When Apple's comprehensive and unique assets are combined, they create a valuable and sustainable system that is incredibly difficult for competitors to imitate.

Dediu sums it up best:

The iTunes stores, Apple's services and Apple Retail are easily ignored because they are not "profit centers" but I believe they are a key component to the sustainment of these margins. ...In other words, the iPhone and iPad enjoy margins not just because they are new and well designed. But also because they form part of a ecosystem. The key word is 'system'. The user buys into a system not just what the device embodies.

Naming competitors that have potential to compete effectively with Apple in one or two given areas of its business isn't difficult, but naming a competitor who can rival Apple's entire ecosystem of inter-dependent assets is incredibly hard.

Apple's margins are monstrous because its moat is monstrous.

But this poses a dilemma: If Apple's hefty gross profit margins are, indeed, sustainable, then why isn't the stock priced as if this is the case? Is Apple a buy?