Last week, Medidata Solutions Inc (MDSO) came out with earnings that appeared excellent, and yet the stock lost about 20% of its value. Is this something investors should really worry about? As someone who bought  shares in August of last year, I'm not too worried; read below to find out why.

First, a quick primer
If you're new to the company, here's an elevator pitch for what Medidata does: the company offers cloud-based software that helps pharmaceutical companies navigate the process of collecting, running, and disseminating data for FDA trials.

As the process itself is rather laborious, Medidata's core offering -- dubbed Rave -- helps streamline the practice and has the potential to save millions in record-keeping costs. Not only is this good for Medidata and pharmaceutical companies, but the public in general, as companies can still reap the same profit but at lower price points.

A quick check on revenue growth
As a company that's relatively young and investing in itself, I'm much more concerned with revenue than earnings growth (more on earnings later). For 2013, the company showed that its products remain popular and are currying favor in the industry.

Not that that translates into growing revenue, but growth that has been accelerating for years now. 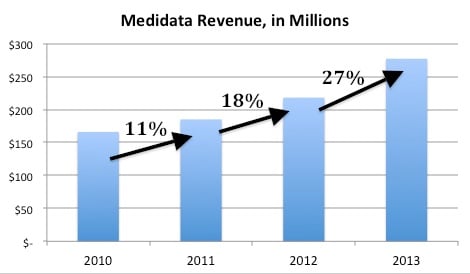 Digging deeper
But revenue growth alone isn't what convinces me this is both a solid stock and a solid company. Over the past year, Medidata retained 100% of its major pharmaceutical enterprises, and 98% of all customers -- that's impressive, and it shows how valued Medidata's technology is. In addition, the company grew its customer base to 397, which is up 13% from the same time last year.

But perhaps the most interesting trend for investors to watch is the number of drug companies that are purchasing multiple products from Medidata. As there are only so many players within the pharmaceutical field, investors should keep an eye on this if they want to know where revenue growth will come from.

Medidata only began keeping track of this information in late 2012, but since then, the company has had no trouble in convincing customers that its additional offerings are worth the money. 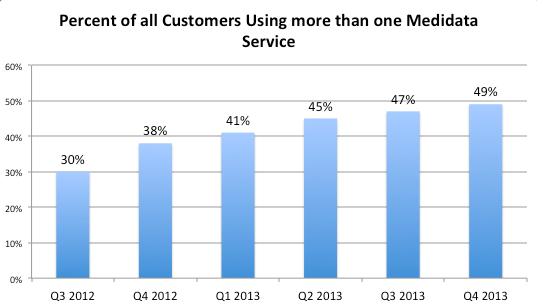 Keep in mind that these are quarterly, not annual, numbers. By doing a little bit of math, we can see that Medidata has grown the number of customers using more than one product by 56% per year. Again, that's very impressive.

Most importantly, the focus remains on the long-term
So why, then, did the company's stock shrink so much? Much of it has to do with the fact that management forecasted virtually flat earnings per share in 2014. Of course, for a stock trading at roughly 70 times earnings, its easy to see why that could ding shares.

But for long-term investors, there's a lot to like. Medidata's gross margins aren't shrinking, they're expanding -- from 71.3% for 2012 to 74.7% for 2013. The earnings shortfall is actually coming from reinvestment in the business.

As CEO and founder Tarek Sherif stated in the company's conference call, "we are firm believers that spending on innovation has the potential to generate the best returns for building future value." Of course, anyone can say that, but Sherif's company has lived that out, and there's no reason to think it won't continue doing so.

Brian Stoffel owns shares of Medidata Solutions. The Motley Fool has no position in any of the stocks mentioned. We Fools may not all hold the same opinions, but we all believe that considering a diverse range of insights makes us better investors. The Motley Fool has a disclosure policy.

Buy This Dividend Growth Stock and Forget About It

Is Invitae in Danger of Running Out of Money?
351%