Phil Knight owns nearly 20% of Nike stock. Should you follow Knight into this great Dow stock, or is he owning too much of his own company?

High insider ownership is often a sign of a great investment. If a company's leaders are putting serious cash into the business by owning a big chunk of shares, they probably believe in the stock's long-term value -- and will align their business strategies with the best interests of shareholders.

Only seven of the 30 Dow Jones Industrial Average (^DJI 0.10%) member stocks have more than 1% of their shares in insiders' hands. But when it snows, it's a blizzard. Say hello to Nike (NKE 1.29%) Chairman and co-founder Phil Knight, who owns a stunning 19.5% of Nike stock all by himself.

Phil Knight, surrounded by the shoes that built his legacy. Image source: Nike.

Knight's Nike shares aren't the same as the Class B shares you might buy on the open market. The bulk of his Nike holdings are in the form of Class A shares, a special ownership class that directly elects three-quarters of Nike's board of directors without giving Class B owners a say in the matter.

Knight owns just 15,480 Class B shares, but also 97% of the 178 million Class A stubs. Each Class A share is convertible into a single common Class B share at will, so Knight could go this way if he ever wanted to liquidate his controlling position. 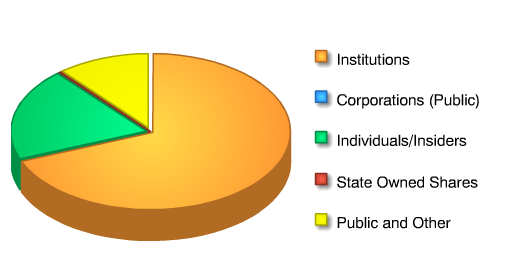 This extreme insider position might be off-putting to some investors. But Phil Knight isn't some greedy micromanager coming into Nike with self-serving profits on his mind.

He started the company to meet the needs of actual athletes -- like himself, a just-graduated varsity middle distance runner for the University of Oregon Ducks. Knight has taken Nike from selling shoes out of his green Plymouth at local track meets to a dominating brand with a $$66 billion market cap and $26 billion in annual sales. Nike became a member of the Dow's hallowed halls last year -- all under Knight's guidance.

This is the kind of long-term manager you should actually root for owning a massive chunk of his own company. Knight is a proven winner and successful business developer, and exactly the guy you'd want on your side when owning a consumer-focused stock such as Nike.

Knight's large position was a key consideration when Tom Gardner recommended Nike to Motley Fool Stock Advisor subscribers four years ago. The stock has more than doubled since then, beating the market by 43%. This insider-owned Dow stock has served Tom Gardner's followers very well.

These 2 Stocks Weighed the Nasdaq Down Friday

2 Cloud Stocks Rising Up on Friday