Results for Ford's performance in Europe last month are out. Spoiler alert: They look really good.

If there's one aspect of Ford's (F 0.46%) business that frustrates investors beyond belief, chances are it revolves around its Europe region. It's been a constant drag on earnings for years and, quite frankly, most investors are tired of it.

However, despite the gloomy market results and billions of profits flushed down the drain, Ford continues to trudge through the doom and gloom. The folks at the Blue Oval continue to launch newer and better products in the region in hopes that when the market does turn around, it'll be very well positioned to take advantage of additional car buyers. The good news for investors is that the strategy appears to be working.

By the numbers
Ford's sales in the 20 key European markets the company tracks surged 9.2% to 80,800 vehicles last month, compared to January 2013 -- nearly double the industry growth of 4.7%. Further, all of Ford's key metrics improved in January; its total market share, retail share, and commercial vehicle share all moved higher.

Digging into the specifics, Ford's share of the total vehicle market was 7.5%, an increase of 30 basis points. The company's retail market share improved 40 basis points to 7.8% and was the 12th consecutive month of growth. Ford's commercial vehicle share reached its highest level since 1998 and improved 90 basis points to 10.4%, according to the company.

"Our sales and share growth -- particularly in the higher value retail segment of the market -- speak to the strength of our new vehicles and products," said Roelant de Waard, Ford of Europe's vice president of marketing, sales, and service, in a press release. "We've launched 11 new vehicles over the past 15 months, and we'll launch more than 10 additional new vehicles in 2014 alone."

One key new vehicle to watch will be the Mondeo, or the Fusion as we know it, as it could have a large impact on sales in the region. Historically, smaller vehicles such as Ford's Focus and Fiesta have sold very well in Europe, but the Mondeo is a larger vehicle. Despite its larger build, the vehicle has done extremely well in the U.S. because it brought a more aggressive, coupe-like, style to a typically bland segment -- expect a similar success story in Europe.

Bright spots
One of the bright spots in Ford's figures can be found in its largest European market: the U.K. Ford's sales in the U.K. pushed 11% higher, which contributed to a gain of 60 basis points in market share for a total 15.3% piece of the market pie.

Another bright spot can be found in Ford's sales mix. Fleet sales are very profitable, but sales to rental companies can lower margins and drag residual value through the mud. Last month, Ford grew its retail and fleet customer sales by 4%, contributing 78% of the company's total sales (6% more than the industry average), which is a healthier and more profitable sales mix. On the other end of the equation, Ford's sales to rentals and dealer registrations, which are typically less desirable, declined to 22% of total sales, down from 28% in 2013.

Further, one statistic that should have investors hopeful for the company's future in the region is that 43% of all sales last year were all-new or significantly refreshed models -- the company is building a better brand image that will set itself up for success in Europe during the back half of this decade. 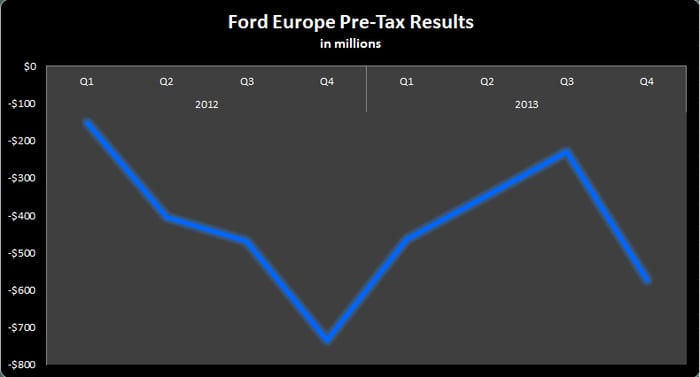 Bottom line
Make no mistake: Europe is still a profit black hole. More than a billion dollars will likely be sucked from Ford's bottom line before all is said and done and the region returns to profitability. However, expect much progress to be made this year, and expect the company to deliver profits sometime in 2015 -- and then it's all downhill with launches of new vehicles leading the way to reverse Ford's most challenging global region.