Using the lessons Bruce Henderson, ex-CEO of Boston Consulting Group, we look at how the infrastructure-as-a-service market is likely to change in the coming years.

In 1976, Bruce Henderson -- then CEO of the Boston Consulting Group and a renowned management guru -- had an insight that isn't talked about enough. Mr. Henderson made the observation that stable, competitive markets often have just three major competitors.

Market shares for these "Big Three" tend to align in a 4:2:1 ratio -- meaning that the industry leader will double the market share of its nearest competitor, which in turn does twice as much business as the next-to-nearest competitor. It's supposed to be a naturally occurring phenomenon of mature industries.

Why does that happen?

We don't exactly know. Remember that Mr. Henderson was in the consulting business, not academia, so his ideas aren't fully fleshed out into a comprehensive theory. In all fairness though, a recent follow-up study by BCG -- in partnership with Chapman, Claremont, and Rutgers Universities -- looked at 10,000 companies in over 450 industries. The report reads:

Our analysis allows us to confirm that Henderson's hypothesis was indeed valid when he conceived it: it accurately described the market share structures current at the time and trends in a wide range of industries. We can also confirm that the rule of three and four has remained a predictor of the evolution of industry structures in "stable, competitive" industries.

It seems to me that "'stable, competitive' industries" is simply a euphemism for three companies that don't want to shoot themselves in the foot. What I mean is that just getting the competition down to three big players must have been a grueling road of messy mergers and expensive acquisitions. Having earned a top spot through aggressive expansion, most firms then turn the attention to protecting their sales volume, creating the holding pattern that Henderson is talking about.

But I'm getting off topic; my point is that The Rule of Three and Four does work in reality. For example, when Enterprise bought Vanguard in 2007, it "set in motion competitive dynamics implicit in the rule of three and four." By 2011, here's what the industry looked like: 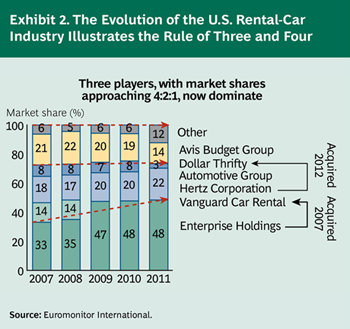 It's obvious that Henderson's phenomenon accurately models the market relationship between Enterprise, Hertz, and Avis, but as investors we're interested in predicting the state of an industry, not simply describing it. That's where it gets tricky, because not all industries will evolve this way. The key is a business environment that tolerates a high degree of consolidation, is relatively free of regulation, and has high barriers to entry.

Right now, Amazon.com (AMZN -1.40%) is the undisputed leader in providing infrastructure-as-a-service (IaaS). No "Big Three" exist in IaaS yet; it's just Amazon and then the rest. Through its non-retail arm -- Amazon Web Services -- the company established an early foothold in a relatively young and lucrative industry. It provides online data storage and increased processing power to clients that would otherwise have faced enormous upfront costs in setting up and running their own servers.

It's a no-brainer for most business owners. On one hand is the expense and hassle of maintaining your own hardware, whereas on the other is the ease and efficiency of outsourcing to specialists.

And the industry is only getting bigger.

During the last quarter AWS brought in about 6% of total revenues compared with 4.7% just a year earlier – all this despite aggressive price cutting. According to a Gartner report, Amazon has more market share than the next 15 competitors combined. "AWS is a thought leader…. It has the richest IaaS product portfolio, and is constantly expanding its services and reducing its prices," writes Gartner.

Anyone familiar with Amazon knows that this is what the company does. It crowds out smaller rivals through quality service and razor-thin margins. But Gartner did have some good news for Amazon's rivals. Apparently the secret to long-term survival in the IaaS market might be as simple as going niche, seeing as the only other market leader identified was Outsourcer CSC, a firm favored by traditional IT departments.

Will the IaaS industry follow The Rule of Three and Four?

I really don't see why not. There's no wave of antitrust litigation against Amazon, regulations for IaaS are few and far between, and Amazon's ability to price out its mid-size competitors will discourage other companies from entering the industry. Yes, Amazon is the king of the jungle right now, but there's ample room for a number two and three. Originally I pegged Google (GOOGL -0.94%) as an obvious contender because IaaS is a logical extension of its business model and the company has deep enough pockets to fight Amazon on price.

But Mr. Henderson's insights convinced me that the tag team of Verizon (VZ 0.81%) and Oracle (ORCL -0.26%) is a far better play. He famously wrote that "if a firm is outside the top three, it should attempt to improve its position through consolidation or by shifting the basis of competition," (my emphasis). Right now, the basis of competition is price, but only because new developments haven't been taken into account.

Verizon's huge win over the FCC recently shattered our concept of net neutrality. As a result, Internet service providers like Verizon can manipulate the quality of service between content producers and end users. Netflix is a great example. If Verizon and AT&T wanted to compete with Netflix, they can now tip the Internet speed in favor of their own websites and no regulatory agency has the power to stop them.

So why stop at just Netflix? Most cloud computing vendors promise that the cloud will have a maximum downtime of 0.05%, but that could prove difficult if Verizon starts slowing access to those websites. The basis of competition will move from price to reliability.

This makes Oracle a winner by association. Not only does it benefit from the net neutrality decision by working so closely with Verizon Terremark, but the company also isn't restricted from partnering with other vendors. In fact, customers can also access Oracle's database services through AWS!

Like Outsourcer CSC, Oracle's enterprise editions appeal to IT departments that like to retain some control over their operations. And now, even data centers located on-site can be moved onto the cloud, adding flexibility as a selling point. That's also why pricing is on a per-hour basis. It's entirely about giving customers the opportunity to tailor the product and pricing to suit their particular needs.

All in all, I just don't see Amazon continuing to dominate this industry in the way it has been. Investors shouldn't under-appreciate the seismic power shift that took place when net neutrality got struck down.

By virtue of these changing dynamics, the market will gravitate toward a Hendersonian-style structure, with two of the top spots yet to be claimed. Having removed the level playing field, I'd say this is now Verizon's game to lose.

Gaurav Seetharam has no position in any stocks mentioned. The Motley Fool recommends Amazon.com and Google. The Motley Fool owns shares of Amazon.com, Google, and Oracle. We Fools may not all hold the same opinions, but we all believe that considering a diverse range of insights makes us better investors. The Motley Fool has a disclosure policy.