This company may be undervalued by the market.

Abaxis (ABAX) fell sharply after reporting disappointing results last month. However the recent recovery suggests the market is beginning to realize that the cause for the "dismal" results (the CEO's words)  is most likely a one-off occurrence rather than the start of a trend. 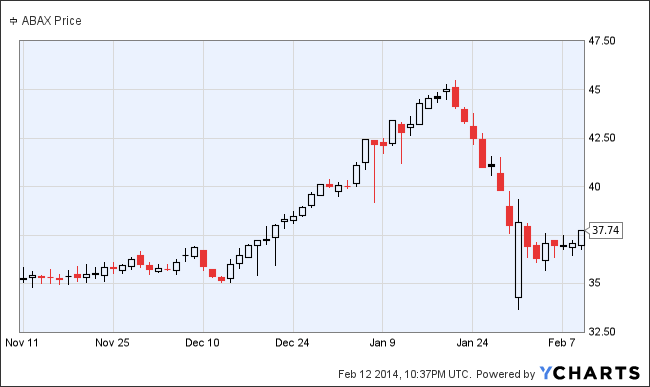 Abaxis supplies point of care blood analyzers to the medical and veterinary markets, where the demand is fairly inelastic. Moreover, its compact yet complete system can be operated with minimal training and perform multiple types of tests, as well as provide results in minutes with clinical laboratory accuracy .

In the quarter ended in December, revenue decreased 18% primarily due to lower sales in the core veterinary market segment (79% of revenue ) as a result of excess inventory in the distribution channel, an unfavorable comparison from two large stocking orders in the prior period, and transition of its medical sales to partner Abbott.

The news wasn't all negative as international sales increased 13% in the quarter ended in December  and operating cash flow increased 4% in the nine months ended in December, . The latter continued the trend of consistent free cash flow growth shown in the chart below. Moreover, the balance sheet remains strong as cash and investments increased by $17.1 million to $112.4 million while there is less than $1 million of debt .

The steady top and bottom line growth shown in the chart below should rebound for the following three reasons.

First, management said that the inventory problem should be resolved within two quarters when it expects increased purchases from its veterinary distribution partners due to higher demand .

Second, the previously mentioned new distribution agreement drove a 30% decrease in sales and marketing expenses (which only accounted for 21% of revenue compared to 25% in the prior period ), as this allowed Abaxis to substantially reduce its U.S. medical sales force. Moreover, the planned sales force expansion by Abbott should drive additional revenue growth .

Third, profitability should increase for a number of reasons. For example, next February minimum royalty payments for one of its tests go away, which should lower costs. While an attempt to improve manufacturing efficiencies backfired by actually raising costs, management corrected this problem so costs should come back down .

Shareholder-friendly management
The history of buybacks and special dividends should encourage shareholders during this transition period. In the nine months ended in December, Abaxis repurchased $3 million of stock after the board approved a $12.3 million buyback increase in July 2013 and $30.3 million since authorizing the program in August 2011. In December 2012, Abaxis declared a special cash dividend of $1.00 per share for a total payout of $22 million . While a regular quarterly dividend would probably be appreciated more by investors, another special dividend is a real possibility given the growing cash balance and may provide a similar annual yield. Moreover, in April 2013 the board let a shareholder-unfriendly poison pill expire .

Although Heska recently reported a small profit , EBITDA (earnings before interest, taxes, depreciation, and amortization) for the trailing 12 months is still negative compared to $31 million for Abaxis. Moreover, the gross and operating margin of 42% and 0% , respectively, is significantly lower than the 47% and 11% for Abaxis . Furthermore, Abaxis has a history of eating Heska's lunch. For example, in May 2009 Abbott terminated a distribution agreement with Heska  and signed one with Abaxis .

However, Heska and Idexx should both benefit from the same overall trend of increased spending on pet care. Moreover, Heska also recently completed a sales restructuring that should improve results going forward.

Idexx Laboratories (IDXX -2.01%) is significantly more attractive than Heska given its larger size and strong recent performance (e.g., higher revenue and margin, recurring revenue ). Moreover its greater market and product diversity provide increased revenue stability and position it to benefit from the persistently high demand for milk and animal safety.

Although the stock trades at 20 times EBITDA, this is actually a modest discount to the multiple of 24 for Abaxis.

However this is not a relative value play against Idexx. Rather, Abaxis is more of a special situation with its unique catalysts. Moreover, the high relative multiple should come down once revenue and EBITDA rebound.

Bottom line
Investors striving to be more like Warren Buffett should ask themselves what he would do in a situation like this. I think that he would view the temporary inventory problem as an opportunity to build a long term position at a favorable price because he knows that the largest gains are made by being greedy when others are fearful.