Activision-Blizzard has announced good news on two different fronts. World of Warcraft subscriber count has started to grow again after more than a year of declines, and the publisher is adding a third studio to its Call of Duty franchise in order to boost its quality. Electronic Arts' technical problems with Battlefield 4, along with this announcement, may keep Call of Duty on top for a long time.

Activision-Blizzard (NASDAQ: ATVI) faced two big problems with its business over the past year. First, the massively multiplayer online role playing game World of Warcraft has been bleeding subscribers, each of who pay a monthly fee, which threatens one of the company's biggest cash cows. Second, sales of the annual Call of Duty games have been declining after peaking a couple of years ago, with reviews of the game following the same trend. Activision's recent earnings report brought with it good news on both fronts and along with a promising pipeline of new games, 2014 is shaping up to be a good year for Activision. Competitor Electronic Arts (EA 0.50%) may not be so lucky.

World of Warcraft grows again
World of Warcraft, first launched in 2004, is a global phenomenon. Over 100 million unique accounts have been created since the game launched, and while the current subscriber base of 7.8 million is well below its peak, the game remains incredibly popular.

The fourth quarter was the first time in more than a year that the World of Warcraft subscriber base has grown, suggesting that the game's subscriber numbers have started to stabilize. Various expansion packs over the years have added content to the game, and Activision plans to increase the pace at which those expansions are released. For the first time, the company is working on two expansion packs simultaneously, with the hope that less time between updates will help maintain the subscriber base.
With millions of subscribers paying a monthly fee, World of Warcraft represents a big source of revenue for Activision. The subscriber growth is good news for the company, and the increased pace of expansion pack releases is something that likely should have happened years ago.

Call of Duty gets a quality boost
The Call of Duty franchise has been suffering from a quality problem. Two development studios were formerly responsible for the games, with each having two years of development time, and releases were staggered so that each year would see a new game in the franchise.

The problem with this is that two years is not enough time to both create a triple-A game and add enough new features to distinguish the new game from the previous game in the series. New Call of Duty games began to look very similar to previous games, and both their sales and review scores started to decline. While Call of Duty has remained the best-selling franchise for the past five years, its quality has undoubtedly taken a hit.

In its earnings report, Activision announced a solution to this problem. The company will now use three development studios to work on the franchise, which allows each team to have an additional year to complete their respective version. This extra year will provide enough time to add new features and polish, and it should help freshen the Call of Duty experience for gamers. The first Call of Duty game to be developed by the new third studio, Sledgehammer Games, will be released in 2014.

This is big news, and it shows that Activision understands that the franchise will die if its quality is not maintained. While Call of Duty: Ghosts was the second best selling game of 2013, behind an entry in the infrequently updated Grand Theft Auto series, it is unlikely that its sales will come close to the peak levels of 2011's Call of Duty: Modern Warfare 3.

A strong pipeline
Activision plans some big releases for 2014, and these should help drive both revenue and earnings higher. The first Call of Duty game on the three-year development cycle will release in 2014, and Activision CEO Bobby Kotick has stated that this year's entry in the series will be "one of if not the best" Call of Duty games ever. A new entry in the Skylanders series, a franchise that has now produced over $2 billion in revenue, is set for release in 2014 as well. Skylanders games interact with physical toy figures, sales of which are included in the $2 billion figure, and approximately 175 million toys have been sold since the franchise was started. In 2013, SWAP Force was the number one kids game, according to Activision, and a repeat performance in 2014 is very possible.

The biggest 2014 release for Activision may be Destiny, an online open-world first-person shooter from the same studio responsible for the Halo series. Destiny has the potential to be one of the best-selling games of the year, and Activision estimates that the game is on track to have a record number of pre-orders for a new franchise. Destiny could end up becoming Activision's next billion-dollar franchise, a lofty but very achievable goal. 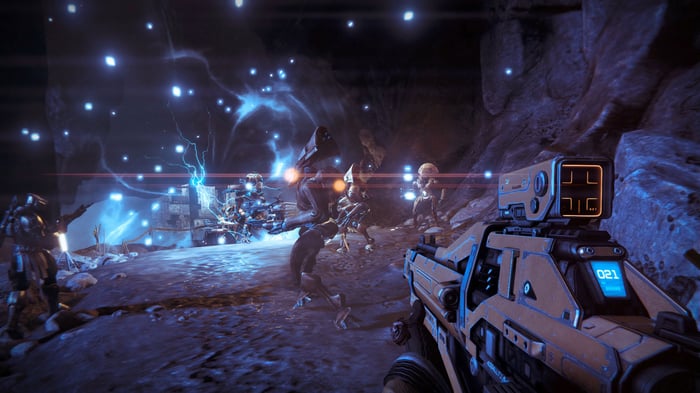 Competitor Electronic Arts also has some big releases planned for 2014, but the company's Battlefield 4 problems don't inspire a lot of faith in its execution. Titanfall, an online first-person shooter, is set for release in March, and the game is expected to be a hit. Another big release for the company is The Sims 4, an update to the wildly popular Sims franchise. EA has a big year ahead of it, but a repeat of the Battlefield 4 debacle could derail things very quickly.

The bottom line
Activision seems to have fixed two of its biggest problems -- declining World of Warcraft subscriber count and Call of Duty quality issues -- and along with the potential billion-dollar Destiny franchise, 2014 looks like it will be a far better year for the company than 2013.