Baidu joined the Tizen Association to work closely with manufacturers. Can it fend off threats from Qihoo 360?

On Thursday, the Tizen Association, led by Samsung (NASDAQOTH: SSNLF) and Intel, announced 15 new partners./Baidu (BIDU -0.28%) was among the names included, and indicates the company is taking further steps to establish itself on mobile devices where it faces fierce competition from Qihoo 360 (QIHU.DL).

Baidu is among several Chinese companies working with Samsung on the Linux-based mobile OS. As Chinese smartphone makers try to differentiate themselves in the crowded Google (GOOGL -0.94%) Android market, Tizen may provide an answer.

The fragmented Chinese app store landscape
Google is essentially locked out of the Chinese market, and Android users are left to third-party app stores to find games and apps. Qihoo 360's mobile assistant and Baidu's 91 Wireless are each among the most popular app stores in the country, but there's still plenty of market share to be had, especially as the market expands.

To capture more market share, Baidu introduced what it calls "light apps." Basically, they're web apps that users can open straight from search results without having to install anything. To counter Baidu, Qihoo rolled out the ability to "open in app" directly from its mobile search results. If the user doesn't have the app installed, they're given the option to download it through Qihoo's mobile assistant.

Each company is attempting to leverage the strength of their search engines, which Baidu has typically had a commanding share of. However, Qihoo's entry into the market in 2012 has gained significant share in the last 18 months. In Qihoo's third quarter conference call, management claimed it had 22% of China's search traffic share.

Baidu may be looking to establish a strong position in Tizen, in order to make its products the default for mobile devices from certain manufacturers. This would help bolster its market share in both search and app downloads.

This is the approach Google has taken with its Android operating system, and led it to capture 93.3% of U.S. mobile search revenue in 2012. Working closely with Tizen Association handset manufacturers, including Samsung, Huawei, and ZTE, will strengthen its ability to gain market share in the fragmented market.

Keep the profits rolling
Both Baidu and Qihoo saw significant advances in share price over the past year as more Chinese consumers come online through mobile devices. Baidu is expected to improve revenue more than 40% in 2013 while Qihoo is expected to double its revenue. 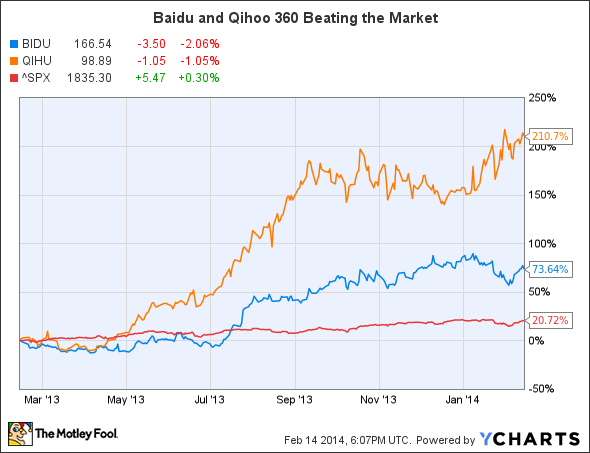 Baidu's profits are expected to remain flat in 2013, however, as the company spent heavily on competing in mobile through acquisitions and internal R&D. Comparatively, Qihoo is expected to grow profits significantly, with analysts expecting $1.42 per share in earnings per share for 2013, 77.5% growth over 2012.

Baidu is expected to return to growth in 2014, but Qihoo might grow even faster. Currently, the market is valuing Qihoo's growth relatively high, assigning it a forward P/E ratio of 44. Comparatively, Baidu is trading for a minuscule forward P/E of just 4.2. With Baidu expected to grow earnings 31% next year and 25% over the next five years, the company looks like it could provide serious value to investors.

A tie-up with other Tizen Association manufacturers could boost the companies profits further, but it may still have to spend heavily to maintain its position in the competitive and fragmented mobile market. Not to mention, Qihoo is attacking the companies lucrative desktop search business as well.

Can Tizen take on Android?
I've written in the past that it's risky for Samsung to cut ties with Android, but it could establish the OS in the low-end market. This is the market experiencing the most growth, especially in developing markets like China, and one where manufacturers are increasingly looking to differentiate their products. The same strategy may appeal to Huawei, ZTE, and other Chinese phone makers.

Samsung is seeking to gain more control over its biggest business segment, and Tizen may be what it needs to get it. At the same time, Baidu may find preferred positioning on Tizen devices by working closely with some of the largest phone manufacturers in China. This would be a big win for the company as it fends off competition like Qihoo 360, and further establishes its position in mobile.