Be skeptical of CEOs, but do it for the right reasons.

Investors have every reason to be skeptical -- and they should be. No one cares about your money more than you.

But not everything is as nefarious as it may seem. In some cases, what appears questionable at first glance may have shareholders' interests at heart.

A growing divide
On a recent conference call for Fifth Street Finance (NASDAQ: FSC), CEO Len Tannenbaum lauded the company's shareholder friendly efforts. In particular, he highlighted that Fifth Street would not ask shareholders for the right to issue shares below net asset value.

It's one of a few BDCs that haven't asked for permission to do so. Neither Main Street Capital (MAIN) nor American Capital (ACAS) asked its shareholders to approve such a measure, either.

Some did. Prospect Capital (PSEC -0.97%) and Triangle Capital (NYSE: TCAP) have repeatedly asked shareholders for permission to issue shares at a price under book value.

What's the big deal?
Issuing shares below net asset value can dilute the wealth of existing shareholders. If a company reports NAV of $10 per share, selling shares at $5, for example, destroys $5 of wealth for each share sold.

You wouldn't sell a $10 bill for anything less than $10. So why would a BDC ever want to sell shares for less than NAV?

The skeptical answer is to make managers wealthier. Most BDC managers aren't paid based on returns. They're paid on assets under management. Selling shares under book value increases the assets under management and thus the potential fees a BDC manager can earn. Logic follows that managers then have an incentive to work against shareholders to issue new shares, regardless of their price, to beef up AUM.

Except, by and large, this doesn't happen.

A brief history
It's interesting that American Capital would find itself in a list of BDCs that didn't ask for the right to sell shares at less than net asset value. American Capital has been spending more than $100 million per quarter buying back its own stock at prices under NAV, so it makes sense it wouldn't ask to sell shares now.

But if you look back to 2009 and 2010, it was issuing shares below book value. That's what kept it afloat during the financial crisis.

American Capital fell on harder times than most BDCs. As a heavy investor in equity and mezzanine (read: higher-risk) debt, its portfolio didn't hold up as well as its rivals. Its net asset value plunged, and its share price fell faster. In a long series of events, American Capital issued shares largely to stay solvent as lenders swirled like vultures around the company's assets. 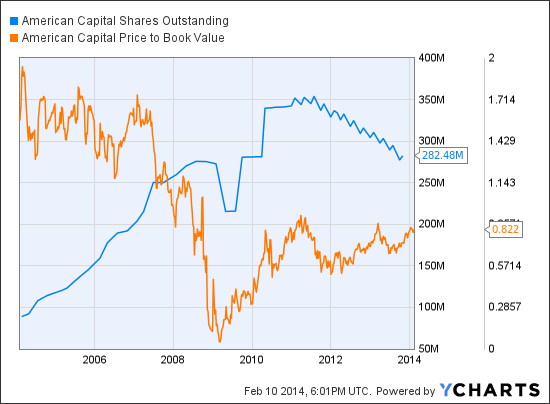 Sure, American Capital diluted shareholders, but one could argue that, without dilution, shareholders would have lost everything. All else equal, losing something is better than losing everything.

Looking a little deeper
Fifth Street Finance can't and won't issue new shares under book value. American Capital has no reason to ask for the right, since it's buying back its own shares quarter after quarter. Main Street Capital likely sees little reason to bother, since shares traded above book value for all but a very brief period in 2008 and 2009, when it was actively buying back its stock.

Triangle Capital and Prospect Capital want the flexibility to issue shares at less than NAV. Both will require more careful scrutiny from investors, but failing any big plan to dilute shareholders, merely asking for the right to issue shares below NAV is a nonevent.

Jordan Wathen has no position in any stocks mentioned, and neither does The Motley Fool. We Fools may not all hold the same opinions, but we all believe that considering a diverse range of insights makes us better investors. The Motley Fool has a disclosure policy.

Are Buyouts the Next Step for These High-Yield Stocks?

How to Draw an Activist Investor