Take-Two Interactive (TTWO -5.34%) had a much better 2013 than its rival video game publishers. But you wouldn't know that by comparing the companies' stocks. Despite massively outperforming profit and sales expectations -- and releasing the year's biggest game in Grand Theft Auto V -- Take-Two is trailing industry giants Electronic Arts (EA -2.31%) and Activision Blizzard (NASDAQ: ATVI). So what does the company need to do to finally win some respect from Wall Street?

In the video below, Fool contributor Demitrios Kalogeropoulos tries to answer that question, arguing that Take-Two could use another major franchise in its portfolio, if just to smooth out the wild volatility in its business that is giving shareholders whiplash. 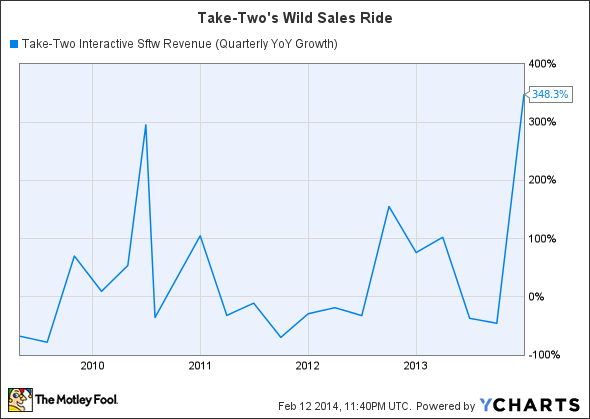 The good news is that the company is using its latest quarterly sales upswing to bulk up on resources, pointing to the potential for some big new property launches on the way. That's why investors should watch closely for updates on the company's game pipeline for 2014 and beyond, which Take-Two should announce in the coming months.