Please ensure Javascript is enabled for purposes of website accessibility
Log In Help Join The Motley Fool
Free Article Join Over 1 Million Premium Members And Get More In-Depth Stock Guidance and Research
By Daniel Miller – Feb 15, 2014 at 10:00AM

You never would have guessed 10 years ago which industry would be producing arguably America's greatest product ever.

Who would have guessed a decade ago that perhaps America's greatest product would be a vehicle? Not even a full-size truck or gas-guzzling SUV, which Detroit was known for -- but a passenger car, and an electric vehicle at that!

If you had placed that bet with Vegas 10 years ago, you would be set for a handsome reward thanks to California's futuristic automaker Tesla Motors (TSLA -6.81%) and its Model S, which has the potential to revolutionize the automotive industry. In fact, Tesla's Model S is so far ahead of its time that the company producing it welcomes -- nay, it encourages -- competition for the sole fact that it would speed up America's adoption of electric vehicles.

Here's the scoop and, if you haven't seen a Tesla vehicle on the road yet, why it might be a household name in the coming decade.

It's a bird! It's a plane! It's ... a supercar?
Quite honestly, fans and critics alike aren't sure how to classify Tesla's groundbreaking Model S. Some call it a luxury car; some call it a sports car; others rightfully call it an electric vehicle -- and in reality, it's a combination of all three.

Tesla's Model S defies stereotypes. If you haven't had the pleasure of riding in a Model S, or seeing one in action, picture a standard electric vehicle -- can you imagine it racing 0 to 60 mph in about 4 seconds? For sake of a comparison, consider that a 2001 Lamborghini Diablo VT 6.0 does 0 to 60 in a similar 4.2 seconds. I'd go out on a limb and guess that most didn't picture that image when thinking of a standard electric vehicle, although that's what the Model S is capable of.

Tesla has convinced its critics that the young start-up automotive company has built a winner. Consumer Reports claims the car is "off the charts" while giving the Model S a 99 out of 100 score in the magazine's test -- one of the highest scores ever. Motor Trend unanimously voted the Model S as its 2013 Car of the Year. The cherry on top was that the National Highway Traffic Safety Administration, or NHTSA, put the car at the top of the list in every safety subcategory and gave the car a new combined record of 5.4 stars in its overall Vehicle Safety Score, according to Tesla's press release.

Even the interior lives up to what you'd expect from a vehicle trying to revolutionize the automotive industry. The first thing you'll notice is the humongous 17-inch touchscreen with capabilities to perform plenty of vehicle or application tasks. Spend a few minutes researching the Model S and you'll find it lives up to just about any measure you can find.

The next hurdle
While the Model S is far ahead of its time, that might be the biggest challenge. The infrastructure in America isn't ready for the Model S to be purchased by the mass audience and range anxiety surrounding the electric vehicle is a common theme for potential owners. That anxiety is becoming less of an issue these days. In addition to plugging the vehicle in your garage overnight, Tesla is aiming to put a supercharging station, which can charge the vehicle's battery halfway in 20 minutes, on every corner to make electric vehicles as viable as the industry standard internal-combustion engine.

However, Tesla's story will take time to complete. That's why Tesla is inviting competition from industry juggernauts such as Ford (F -5.83%), General Motors (GM -5.64%), Toyota (TM -2.29%), and anyone else. In fact, Tesla even helps supply some parts to its competitors for their electric vehicles!

Tesla is in the early stages of its entire story and plans to ramp up production of its Model S, priced at roughly $70,000, to set the stage for its much more affordable third-generation electric vehicle -- one that will surely be produced in an America with a larger and more complete electric-vehicle infrastructure. That could be the vehicle that changes the way we view transportation, and that could make Tesla a household name over the next 10 years.

As the Telegraph stated a couple of years ago, "In the future, this new Tesla Model S electric car might just be remembered alongside the Mini or the Ford Model T as an automotive game-changer." Even the folks on Wall Street are convinced about Tesla's potential: Check out what the young company's stock has done over the past five years, specifically the past 12 months, as production of the Model S has ramped up. 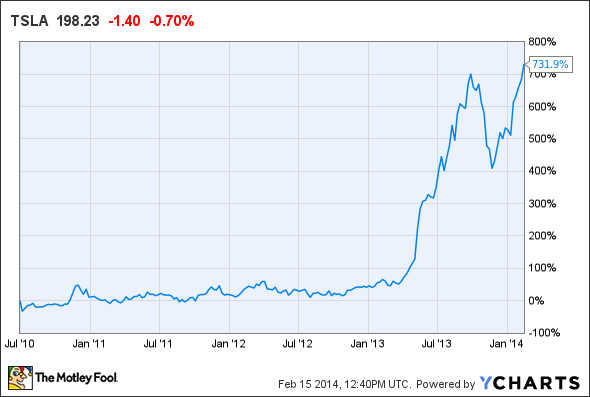 Daniel Miller owns shares of Ford and General Motors. The Motley Fool recommends Amazon.con, Ford, General Motors, and Tesla Motors and owns shares of Amazon.com, Ford, and Tesla Motors. Try any of our Foolish newsletter services free for 30 days. We Fools don't all hold the same opinions, but we all believe that considering a diverse range of insights makes us better investors. The Motley Fool has a disclosure policy.