The world's largest payments processor keeps growing, but Visa (V) is starting to pick up a few competitors.

Investors love stocks that consistently beat the Street without getting ahead of their fundamentals. The best stocks offer sustainable market-beating gains, with robust and improving financial metrics that support strong price growth. Does Visa Inc (V -2.15%) fit the bill? Let's take a look at what its recent results tell us about its potential for future gains.

What we're looking for
The graphs you're about to see tell Visa's story, and we'll be grading the quality of that story in several ways:

What the numbers tell you
Now, let's take a look at Visa's key statistics: 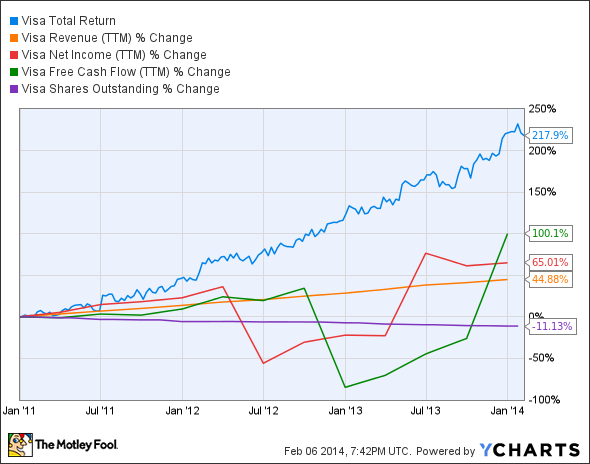 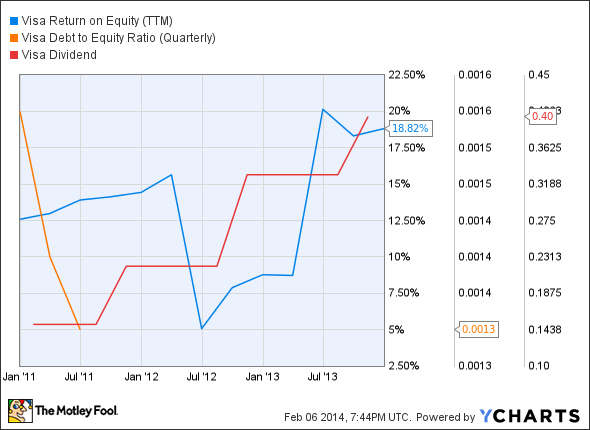 How we got here and where we're going
Visa comes through with flying colors, as it has racked up eight out of nine possible passing grades -- one of the best scores ever awarded to such a large company. Its only failing grade occurred because share price growth has outpaced gains in Visa's net income. However, Visa has boosted dividend payouts by a large amount over the past three years while keeping its cash flow payout ratio at a relatively low level, and it could still earn a perfect grade next year with minimal alteration of its current strategy. But can Visa continue to outperform in the future? Let's dig a little deeper to find out.

Visa recently reported better-than-expected revenue and earnings in its latest quarterly results on the back of rising payments volume growth and strong dollar exchange rates. The company also repurchased nearly 5.5 million shares for $1.1 billion in the first quarter of fiscal 2014, which helped buoy Visa shares. Fool contributor Jeremy Bowman points out that Visa benefited from JPMorgan Chase's agreement to move a number of MasterCard (MA -2.40%) customers to Visa's roster, but this alone wasn't the reason for Visa's rise.

According to the World Bank, global GDP is expected to grow by 3.2% in 2014, a much better clip than last year's 2.4% growth rate, and this higher growth is expected to hold up until 2016. Rival card issuer American Express (NYSE: AXP) tends to grow its aggregate billings 4.5 times as much as U.S. economic growth, which makes it and other card issuers a sort of leveraged play on improvements in the American economy.

Fool contributor Dan Carroll notes that U.S. consumer spending grew by 3.3%, above the overall 3.2% growth in GDP for the fourth quarter. As a result, Visa raised its full-year guidance for 2014 to project double-digit growth in both earnings and revenue.

Visa and MasterCard have also finally put a long-running legal battle behind them by agreeing to a $5.7 billion settlement over interchange fees. This allows Visa to concentrate on what might be another major legal battle with Target and other megaretailers, as several of the world's largest retailers rejected the settlement and its forced waiver of any future rights to sue.

Amazon.com (AMZN -3.03%) is one of the retailers to reject the settlement, and it also has plans to create its own branded Kindle-based checkout system. Should the famously disruptive and notoriously low-margin e-tailer figure out a way to develop its own payments network, it could seriously undermine Visa's growth in the United States -- and that's only one of several ambitious new payment-processing technologies now in development.

Beat the Dow Jones With This Unstoppable Dividend Stock
366%