The packaged-foods market is bustling in the U.S. for a variety of reasons, such as consumers being faced with paucity of time, not to mention rising commodity prices. Companies have been trying to increase market share by innovating or acquiring businesses based on changing consumer tastes and preferences. For example, there's a new generation of consumers who are attracted to natural food and snacks.

J&J Snack Foods (JJSF -0.60%) has been growing through acquisitions, while ConAgra Foods (CAG 1.78%) and Kellogg (K 1.12%) are innovating and adding new products. J&J has been on a shopping spree in order to fuel growth. Has this worked in its favor? Let's take a look.

J&J's moves
J&J has been consistently shopping for growth. It bolstered its churros business by acquiring California Churros in 2010. Churros sales have been moving north since then and in fiscal 2013 increased a whopping 22%. In 2012, J&J acquired Kim & Scott's Gourmet Pretzels. Kim & Scott's pretzels are made of natural ingredients, and this positioned the company to attract a new generation of consumers who are enticed by the "health halo" surrounding these products.

J&J also acquired New York Pretzel in October to strengthen its pretzel segment. In the first quarter, this acquisition led to an increase in soft-pretzel comparable sales of 2%, leading to 21% year-over-year growth. Going forward, this acquisition should be a solid growth driver.

On the back of these acquisitions, J&J's strong fiscal 2013 continued into the first quarter of fiscal 2014. As fellow Fool Jeremy Bowman writes, "J&J's report was short but sweet." It beat analyst expectations on revenue and earnings, delivering 6% year-over-year revenue growth and a record 22% year-over-year gain in net earnings.

Going forward, J&J will hunt down additional acquisitions for the cash that it generates from business. It is also continuing to invest in plant capacities and efficiencies for future growth.

Competitive position
Over a period of five years, J&J has outperformed the market and peers, as shown in the chart, with gains being almost twice those of its nearest competitor, ConAgra Foods. 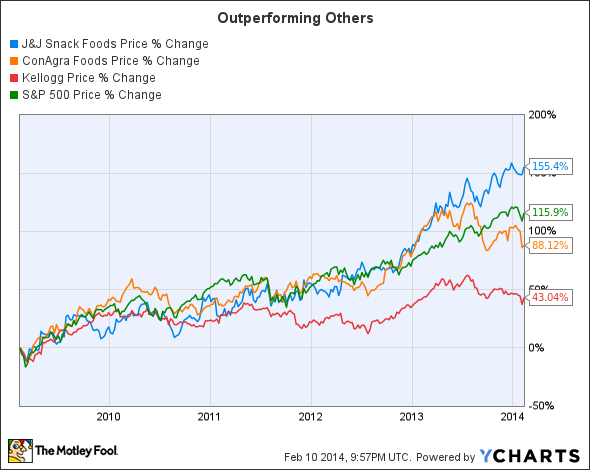 Though ConAgra might trail on the Street, it leads the pack in terms of five-year revenue growth. ConAgra's top-line growth has also been fueled by acquisitions, in addition to other strategies. For example, after a 20-month takeover ordeal, it finally acquired Ralcorp Holdings, making ConAgra the largest private-label food manufacturer in the U.S. 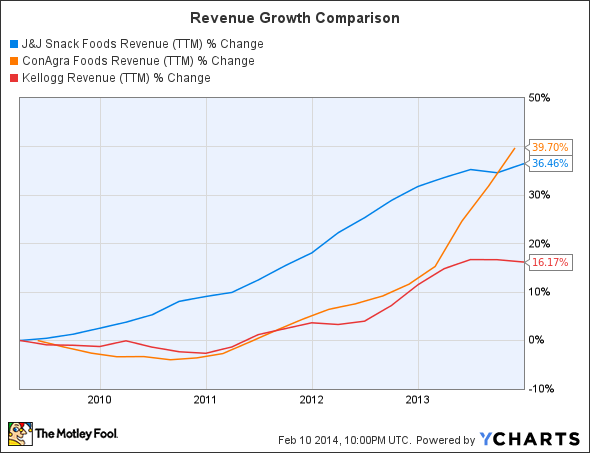 The Ralcorp acquisition presents good long-term prospects, with management having reiterated its view of $300 million in synergies for fiscal 2017. In addition, this acquisition will add $0.25 per share to earnings in fiscal 2014. As a result, ConAgra reaffirmed its earnings-per-share guidance of $2.34 to $2.38 for the fiscal year.

Whereas the growth of private labels may have peaked, as per Nielsen data, around 46% of consumers shop more for private-label brands when food prices rise. Retailers also push private-label brands and store brands, as these products offer margins that are 10% to 15% higher than national brands like Kellogg, as per analyst estimates.

Kellogg has been struggling due to declining cereal sales. The new generation of consumers who are enticed by the "health halo" of organic- and natural-food products are switching to healthier options. Accordingly, Kellogg has taken the path of innovation in order to stir demand for its products and win back customers.

For example, for fiscal 2014, Kellogg has a pipeline of new product introductions,  such as the new Special K Chocolate Almond, Krave cereal, Touch of Fruit Mini-Wheats, Bear Naked granola, and new Kashi cereals, including three varieties of Organic Promise, all of which are GMO-free.

Kellogg's fiscal fourth-quarter revenue declined 1.7% year over year due to another quarter of soft sales in the U.S. In 2014, it expects 1% organic revenue growth and 1%-3% adjusted EPS growth, as sales of its new products begin.

Takeaway
J&J Snack Foods is recording good revenue and earnings growth, and is making the right sort of acquisitions. The company's focus on churros and pretzels has fueled its growth, and investments toward improving efficiency should boost future margins. Meanwhile, Kellogg is aiming for a turnaround, and its new products should help. ConAgra also looks like a good bet after the Ralcorp acquisition, which has fueled revenue growth to a great extent. It also has a dividend yield of 3.2%, which is identical to Kellogg's.

Hence, investors should definitely look at these packaged-food manufacturers to benefit from industry growth.