One of the best things about being a long-term investor is that the law of gravity doesn't have to apply to good stocks. What goes up doesn't necessarily have to come back down. But some stocks can still fly too close to the sun, singing investors who bought in at too dear a price. When we're talking about momentum stocks, one investor's long-term winner could be another's warning sign, so it's important to separate the hype from the truth to find out just why a stock is really soaring today, and whether it can keep rising tomorrow.

YRC Worldwide
It has been a wild year for YRC shareholders, who experienced a sharp drop in early January after the Teamsters union rejected a contract with the trucking company, only to enjoy a rebound by month's end after the two parties reached an agreement. That was the key issue bedeviling debt-weighted YRC, which has rebounded now that bankruptcy no longer seems inevitable: 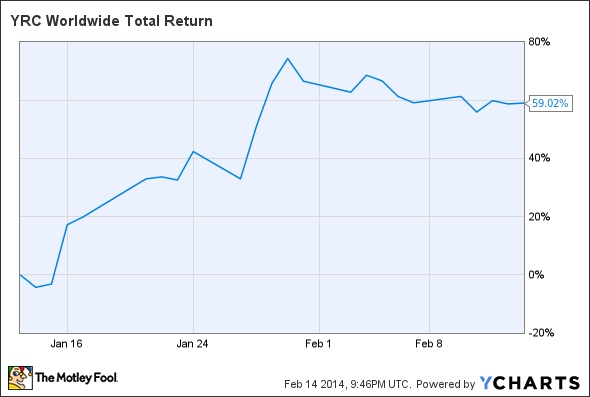 Fool contributor Rich Smith offers the rundown on YRC's recent efforts -- the company has now refinanced a total of $1.4 billion in onerous debt and thus reduced its massive interest payments by between $40 million and $50 million a year -- incidentally, the high end of this estimate is only slightly smaller than YRC's trailing 12-month negative free cash flow. A little more belt-tightening work might even make the trucking company free-cash-flow positive, which it hasn't been since the financial crisis. This would go a long way toward restoring YRC's former market cap, which has fallen by 90% since 2005.

BioAmber
BioAmber has been publicly traded for less than a year, but it's rewarded patient IPO-day investors with a 65% total return, much of which has occurred in the past three months. The largest move of its recent surge took place in late January, after BioAmber signed a contract with Vinmar that will guarantee 100% sales of the output from a planned 100,000-ton bio-based BDO plant for 15 years: 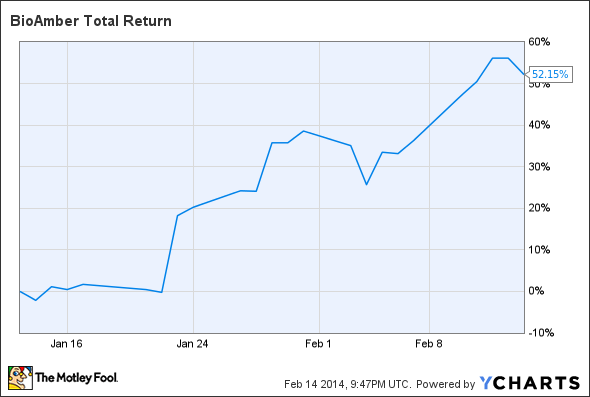 BDO is used to create a range of plastics and is also used to make clothing, and the global market for this chemical was estimated at $4 billion in BioAmber's press release. However, 100,000 tons is going to account for only a fraction of this market, which is estimated to produce "billions of pounds" -- let's call it 4 billion, or 2 million tons -- according to a DuPont (DD) press release that announced the first commercial-scale production of bio-based BDO a year ago. BioAmber's 100,000-ton plant would account for roughly 5% of that global market, equal to roughly $200 million a year using these admittedly very vague numbers available. Today's market cap isn't that far from fully valued for a company that won't reach full production on these promised numbers for several years. Any upside from here seems likely to come from a rapid ramp-up in other production efforts beyond this one big plant.

Green Mountain Coffee Roasters
It's rare to see a company of this size move so much higher so quickly, but investors couldn't help themselves after news broke that the single-serve coffee champ had signed a 10-year agreement with Coca-Cola (KO -0.05%) to produce licensed Coke products for the upcoming Keurig Cold machine. Coke also invested $1.25 billion in a 10% stake of Green Mountain, which now looks like a great deal, as 10% of the company is now worth $1.73 billion based on Friday's close: 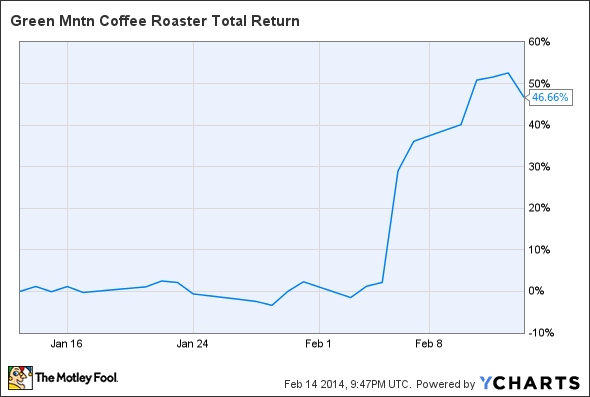 Green Mountain is now without a doubt one of the best stocks of the past two years, as it's grown 500% after beginning a rebound in the middle of 2012. However, the top may have finally been found for this monster success story, as the upside from home-brewed soda may be far smaller than the market expects, according to Fool contributor Nickey Friedman. Analysts are also starting to tamp down their expectations -- but Green Mountain's P/E of 34.5 today is still far lower than it ever was before its slide began in 2011. It might not be a screaming buy any more, but it's not incredibly overvalued, either.

Alex Planes has no position in any stocks mentioned. The Motley Fool recommends Coca-Cola and Green Mountain Coffee Roasters and owns shares of Coca-Cola. We Fools don't all hold the same opinions, but we all believe that considering a diverse range of insights makes us better investors. The Motley Fool has a disclosure policy.

Big Day for Green Mountain and Some Ugliness From Elizabeth Arden

On Another Record Day for the Dow, Keurig Jumps As Fossil Falls
366%